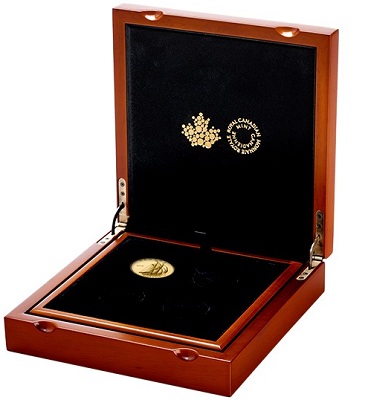 The Royal Canadian Mint has launched a new series of coins entitled “Tall Ships Legacy,” which celebrates the famous tall ships that have left an indelible mark on Canadian history and culture.

The first gold coin in this series features the Bluenose, a Canadian fishing and racing schooner built in the maritime province of Nova Scotia in 1921. A celebrated racing ship and fishing vessel, the Bluenose — named after a colloquial term for Nova Scotians –– became an important provincial and national symbol in the 1930s. The racing legend was so popular that its image has graced the reverse of Canada’s 10-cent circulation coin since 1937, and continues to do so to this day.

The Bluenose was designed for competitive and racing purposes, but was also employed as a working fishing craft. The salt banker schooner proved her worth in her first season at sea by sailing into port with remarkably large cargoes of cod and groundfish from the Grand Banks, and would land a record haul in 1923. But the ship’s racing feats would soon eclipse any other success when, in October 1921, she claimed her first of five victories in the International Fishermen’s Race — and a Canadian racing legend was born.

As the fishing industry declined in the 1930s, the Bluenose transitioned to a role as a show vessel and floating ambassador, representing Canada at the Chicago World’s Fair in 1933 and in the Silver Jubilee celebrations for King George V and Queen Mary in 1935. Another racing victory came in 1938, but by 1939 the Bluenose was out of work and at risk of being auctioned off. The outbreak of the Second World War and the shift to motorized schooners meant retirement for both the fishing vessel and her captain.

The Bluenose was eventually sold to the West Indies Trading Company in 1942 and sailed as a freighter in the Caribbean until 1946, when she tragically struck a coral reef and sunk in the waters off of Haiti. The issue of this coin also commemorates the 95th anniversary of the launch of the ship. 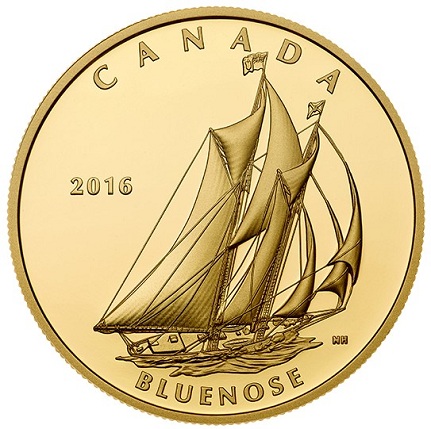 Designed by Canadian artist Neil Hamelin, the coin features a starboard or right side view of Canada’s iconic schooner, under full sail and heeled at a distinctive racing angle. The legendary racing ship and working fishing vessel is brought to life through intricate engraving that includes the rigging, the dories, and the Canadian Red Ensign and Flag of Nova Scotia atop the foremast and mainmast. 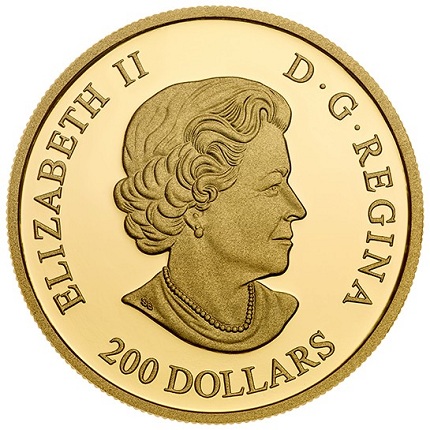 The obverse features the present effigy of Her Majesty Queen Elizabeth II by Susanna Blunt, which has been used on most Canadian coinage since 2002. The denomination of “200 DOLLARS” is positioned below the Queen’s portrait.

Subscribers to the Tall Ships Legacy series will automatically receive the following four coins in 2016:

A complementary custom wood four-coin presentation case is dispatched with the first “Tall Ships Legacy” coin. For more information on these and other coins offered by the Royal Canadian Mint, please visit their Web site. Shipment for this series is only available in Canada and the USA and the issues are not available at RCM retail locations.