The Royal Canadian Mint has issued a new four-coin set which placed together depicts Canada’s national symbol, the maple leaf. When the four square-shaped 2017-dated coins are positioned side-by-side in a greater square, they form an exquisitely engraved image of the Canadian icon. 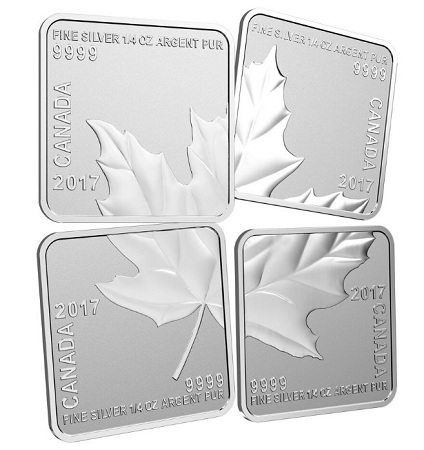 The coins are designed by Canadian artist Celia Godkin and feature a highly detailed engraving of of the sugar maple leaf, or Acer saccharum, as it would appear in a natural setting. From the leaf’s wavy edges to the veins that run through each lobe, the fine details infuse this design with a life-like sense of dimension and texture. The four reverse images combine to form the image of a complete maple leaf. Also engraved on the reverse are the purity, FINE SILVER 1/4 OZ ARGENT PUR 9999, the word CANADA, and the year, 2017.

The obverse features the face value, 3 DOLLARS, and the effigy of Her Majesty Queen Elizabeth by Susanna Blunt. Each piece is considered a separate coin.

All four coins are presented and packaged as one product or complete set and are encapsulated in a Royal Canadian Mint-branded clamshell case with a graphic outer protective box. For more information on these and other coins offered by the Royal Canadian Mint, please visit their Web site. International orders will be dispatched where applicable.