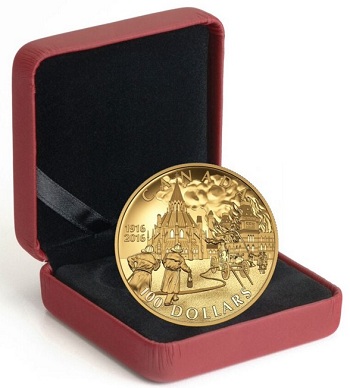 The Royal Canadian Mint has issued a new gold coin for the centennial anniversary of one of the country’s more unfortunate events: the Parliament Building fires of February 3, 1916.

Located on a high point in Ottawa known as Parliament Hill, the Canadian parliament complex consists of four primary buildings, including the Centre Block, the Library of Parliament, the West Block, and the East Block; the Centre Block and Library of Parliament occupy the highest point on the hill. Canada’s gothic style Parliament Buildings were originally built between 1859 and 1866, and became the seat of government for the new Dominion of Canada on July 1, 1867.

The fires at the time had a profound effect. There were endless questions as to just how the fire started, as the country was in the middle of fighting the First World War. Shortly before 9 p.m. on February 3, 1916, a member of parliament noticed smoke in the House of Commons Reading Room in the center block of the Parliament Buildings. As the fire quickly raced out of control, the House of Commons was forced to suspend a debate on fish marketing and evacuate immediately.

Prime Minister Robert Borden, who was in his office at the outbreak of the fire, was alerted and escaped down a messenger’s stairway through thick smoke and flames. His office was badly damaged, but some papers on his desk were found untouched. By 9:30 p.m. the roof of the House of Commons had collapsed, but senators and soldiers were able to rescue some historic paintings from the Senate. With the flames spreading, the Victoria Clock Tower had caught on fire sometime near 11 p.m.; by midnight the clock was silent, with witnesses reporting the fall of the tower at 1:21 a.m. 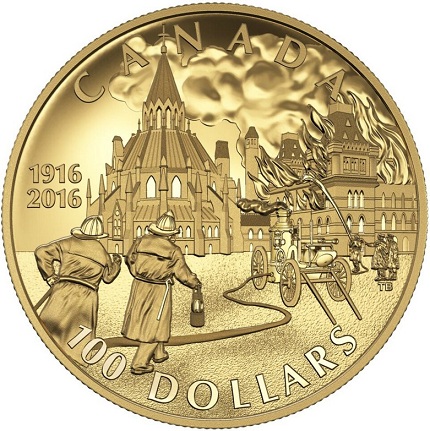 The destructive fire was declared under control by early morning, although there was another outbreak hours later. The Centre Block was still a smoldering shell filled with icy rubble, with the exception of the Library of Parliament, which had been built with iron safety doors. Luckily, these doors were slammed shut against the fire and smoke, and a narrow corridor separating the Library from the Centre Block also contributed to the Library’s survival. Seven casualties in all were found in the rubble, including a policeman, two government employees, and two guests of House Speaker Albert Sévigny. The remains of René Laplante, Assistant Clerk of the House of Commons, were also found two days later.

After the fire, the acute need for a parliament chamber became evident and so the government turned to the Victoria Memorial Museum (now the Canadian Museum of Nature), which was transformed to meet their needs. The museum cleared their exhibition galleries to make room for parliamentarians to meet and work.

On the morning after the fire, the museum’s auditorium was immediately converted into a temporary House of Commons Chamber, and that afternoon members of parliament conducted business there. The exact cause of the Parliament Buildings fire was never ascertained, but the Royal Commission investigating the fire was able to rule out enemy sabotage — something which had been on the minds of many Canadians. Fire safety was inadequate in the Parliament Buildings and the most likely cause was careless smoking in the House of Commons Reading Room.

The rebuilding the Parliament Buildings began in earnest even though there was a war on. The first parliament to sit in the new chamber did so on February 26, 1920, four years after the fire. Although the Centre Block wasn’t completed until 1922, the addition of what was named the Peace Tower, inaugurated in 1917 by the Prime Minister, wasn’t completed until 1927. The Peace Tower, originally a memorial to “the valor of those Canadians who, in the Great War, fought for the liberties of Canada,” has today become the most recognizable feature of the Canadian Parliament buildings complex. 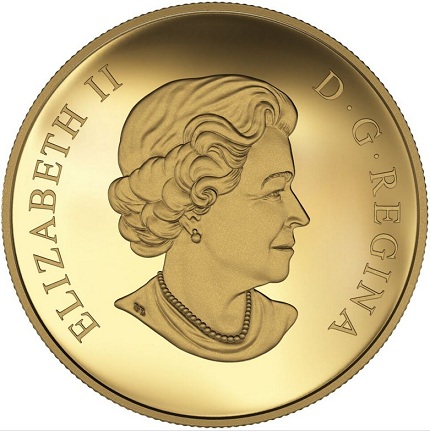 The coin is designed by artist Tony Bianco and includes a detailed depiction of the tragic fire that engulfed the Centre Block of Parliament. As flames and smoke suddenly billow into the night sky, firefighters rush onto the scene near the western rear of the Centre Block. One firefighter stands ahead of a steamer as he douses the flames with water, and two more rush across the snow-covered landscape to join the fray. In the midst of all the chaos and tragedy, the towering spire of the Library of Parliament remains an inspiring sight as it seems to remain untouched by the blaze, due to the fireproof doors. The obverse side includes the effigy of HM Queen Elizabeth II, designed by Susanna Blunt and used on all Canadian circulation coins and many commemoratives since 2002.

The coin is encapsulated and packaged in a Royal Canadian Mint-branded presentation box. For more information on this and other coins offered by the Royal Canadian Mint, please visit their Web site. International sales will be dispatched where applicable.