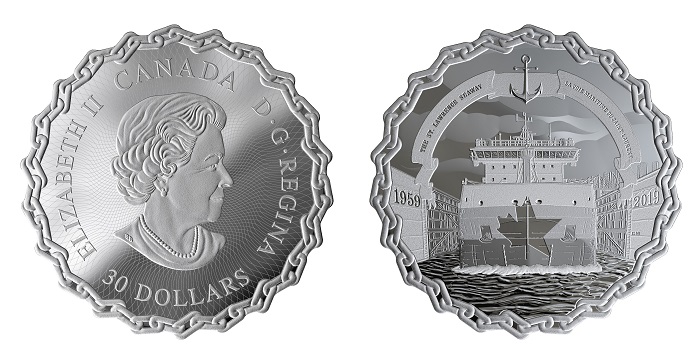 The Royal Canadian Mint has released (7th May) new collector silver coins which are in celebration of the 60th anniversary since the official opening of the St. Lawrence Seaway, one of the world’s busiest waterways which enables the trade of heavy manufactured goods and energy to be transported by tanker. Its waters serve as the economic lifeblood for two nations through its channels and locks that provide a vital connection for North America’s heartland to the Atlantic Ocean.

In 1954, the St. Lawrence Seaway Authority was established by an act of Parliament, with the mandate to acquire lands for, construct, operate, and maintain a deep draft waterway between the port of Montreal and Lake Erie. The conceived project also included plans for international bridges that crossed it and other lands and structures. In order to proceed and meet the targeted deadline for completion, 100 square miles (259 square kilometres) of acquired land, which were confiscated from homeowners, was flooded, resulting in whole communities needing to be resettled. More than 6,500 persons and 550 new homes were built communities in Ontario with the new towns of Long Sault, Ingleside, and Iroquois having been created as a result. In 1958, the power to operate the various locks along the seaway was switched on at the international Moses-Saunders generating station, meaning the four-year construction deadline had been met almost to the day.

Completion of the joint U.S.-Canadian St. Lawrence Seaway navigation project was intended to link the Great Lakes region to global markets, and on the 25th April 1959, the icebreaker “D’Iberville” began its first transit through the St. Lawrence Seaway. The seaway was officially opened by HM Queen Elizabeth II and President Eisenhower on the 26th June with dedication ceremonies following the next day in Massena, New York, that involved the HM the Queen and then-Vice-President Richard M. Nixon. The seaway was further straightened in 1973 and today its eight locks, all Canadian, are capable of lifting ships 326 feet (100 meters) over the Niagara Escarpment. In 1989, 30 years after its official opening, the seaway had handled more than 160,000 ship transits by ships from more than 50 nations. In 1995, the Montreal/Lake Ontario section of the seaway set a new record for the longest continuous amount of days of operation from the 24th March to the 28th December, totalling 280 days. 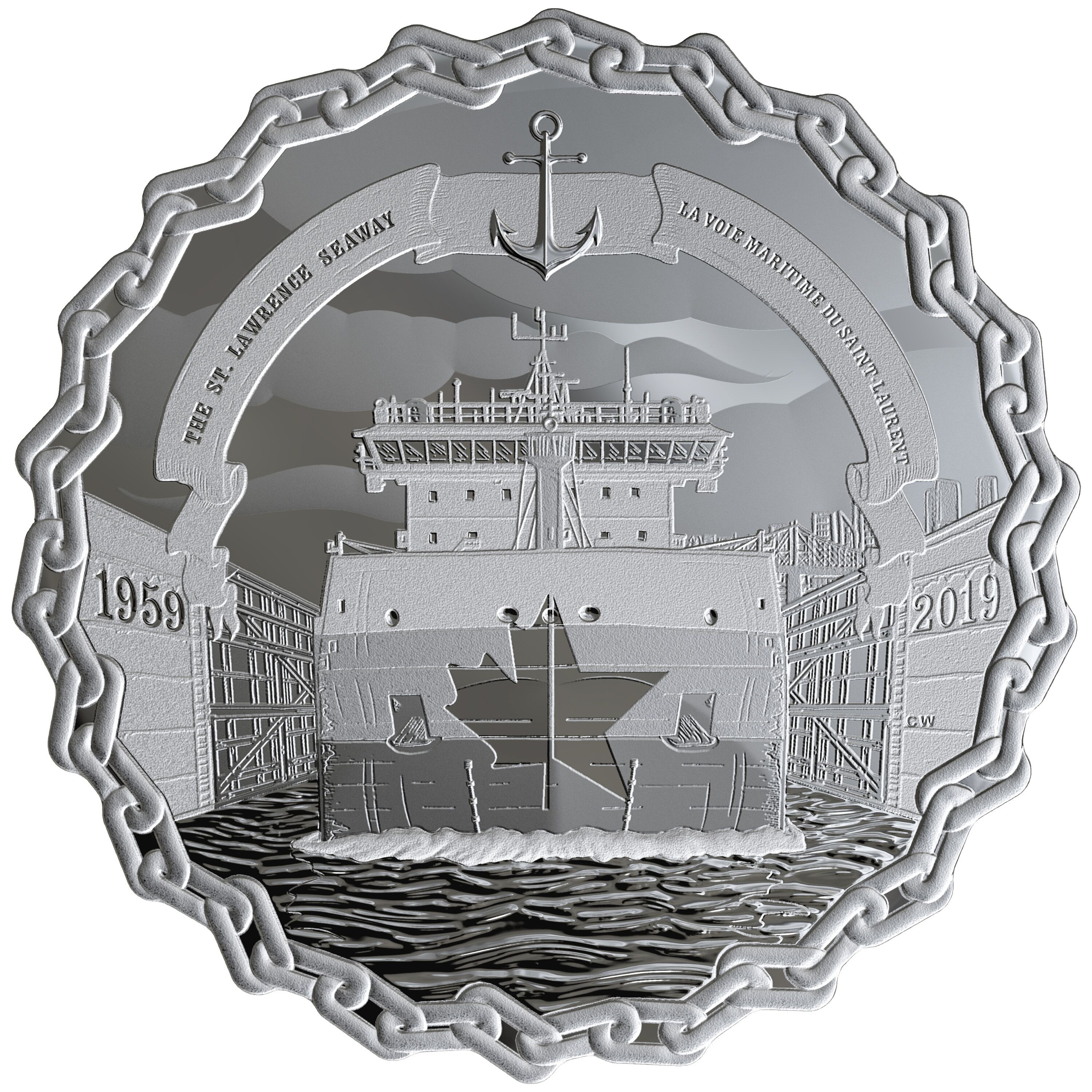 The St. Lawrence Seaway coins are the first created by the Royal Canadian Mint to incorporate a corrugated edge, and with the anchor-chain rim which is a marine-inspired twist on traditional denticles, both complement each other perfectly in terms of imaginative design, created by Claire Watson. The reverse side includes a stylised, symbolic celebration of the St. Lawrence Seaway on its 60th anniversary. It features a head-on view of an eastbound bulk carrier, or laker, transiting through the St. Lambert lock, where the Montréal skyline is visible in the distance. The reverse includes the words THE ST. LAWRENCE SEAWAY and LA VOIE MARITIME DU SAINT-LAURENT on a scroll banner that also bears a stylised anchor. 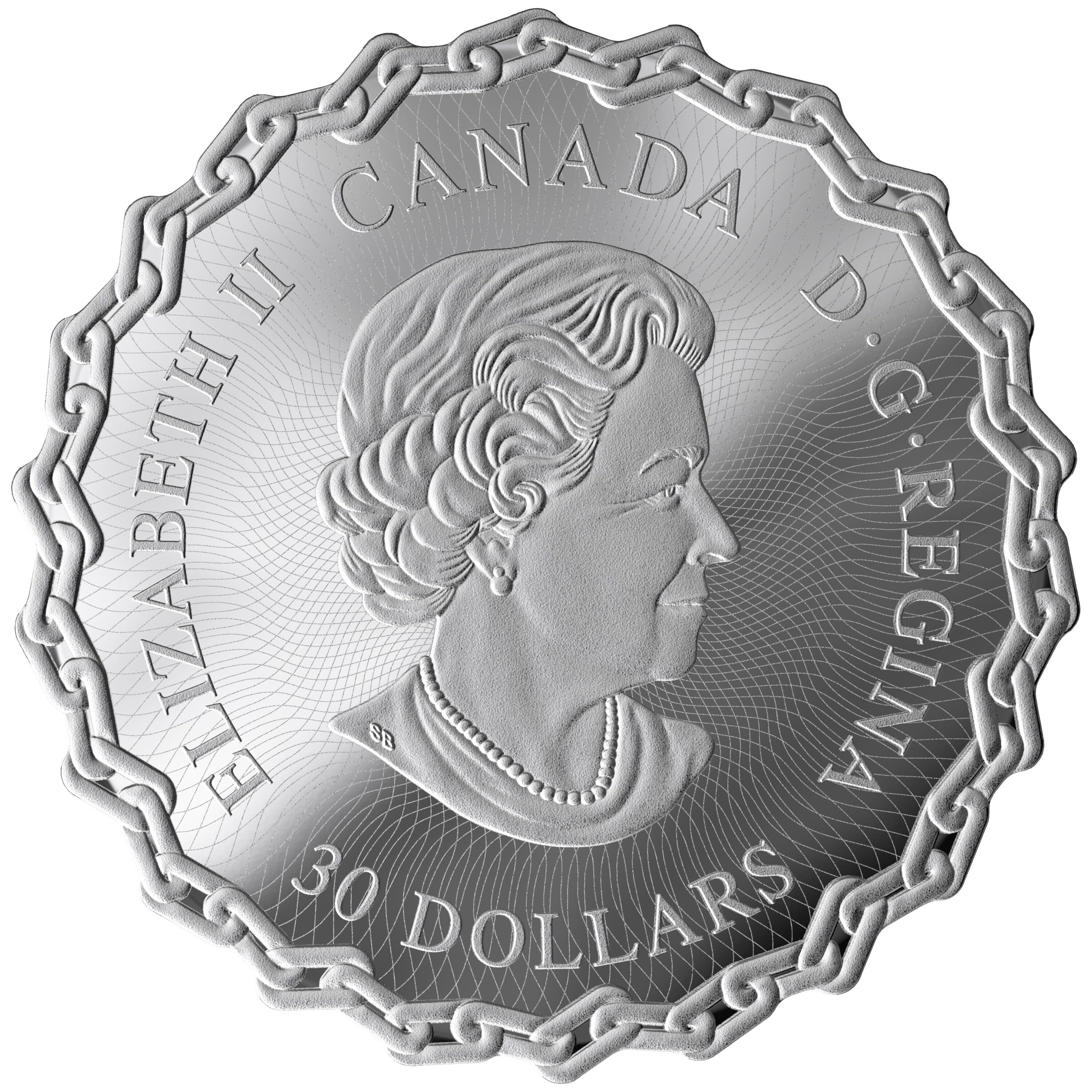 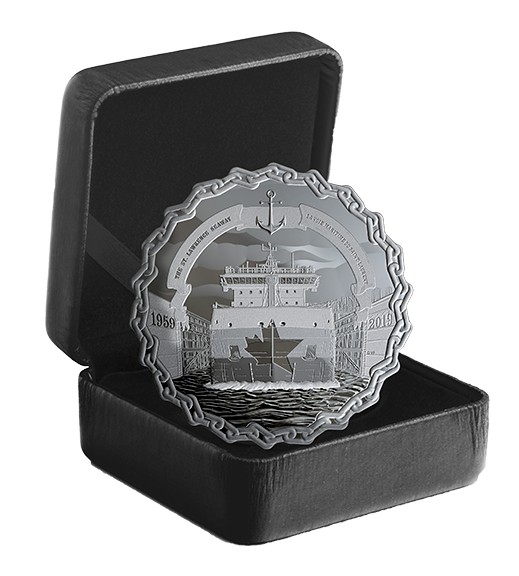 The large-size Proof silver coin is specially encapsulated and encased in a custom case to accommodate the coin’s dimensions and is accompanied by a numbered certificate of authenticity. For additional information on this and other coins available from the Royal Canadian Mint, please visit their website.