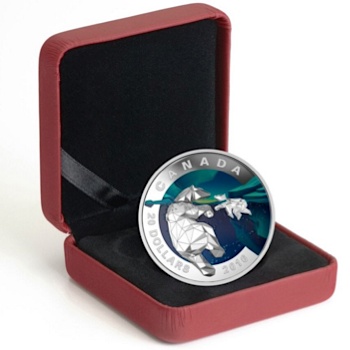 The Royal Canadian Mint has issued a new silver coin with a distinctive design of one of Canada’s more popular and beloved subjects: the Polar Bear. Collectors of Canadian coins often comment that the designs of indigenous wildlife are in many instances painstakingly and precisely detailed right down to the strands of fur and feathers on a depicted animal; with this new example, however, the design takes a new approach combining familiarity and abstract design, blending together a mass of polygons to create a captivating image of a mother polar bear and her cub.

Known as “low poly” art in the video game industry, this geometric technique has been merged with outstanding sculpting, cutting-edge technology, and advanced finishing techniques. The result of this merging of technique and approach is a stunning design with exceptional relief that defines every polygon, and rich, bold colors that bring depth, dimension, and a powerful sense of shadow and light to the scene. 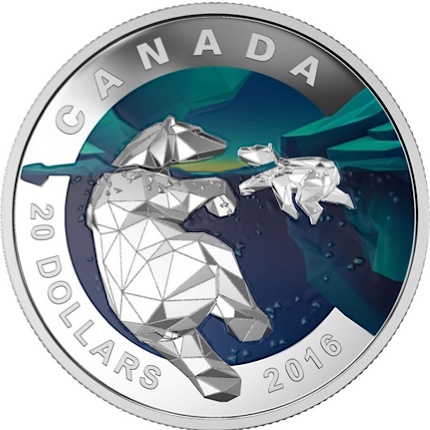 The coin is designed by Canadian artist Calder Moore and features a stylized portrait of the “King of the Arctic,” the mighty polar bear, otherwise known as Ursus Maritimus. Multiple polygon shapes come together to form a mother bear (left) and her cub (right). Together, they create a touching scene of this iconic species, as a mother bear introduces her cub to Canada’s Arctic waters. Swimming out, the mother turns to face her young as he attempts his first few strokes. The hard edges that are characteristic of this style lend themselves to recreating the Arctic ice above and below the water’s surface. 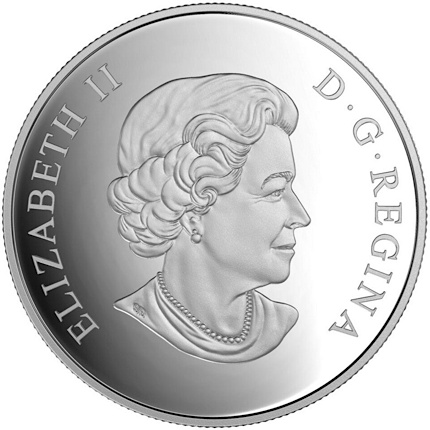 The obverse side includes the effigy of HM Queen Elizabeth II designed by Susanna Blunt and used on all Canadian circulation coins and many commemorative issues since 2002.