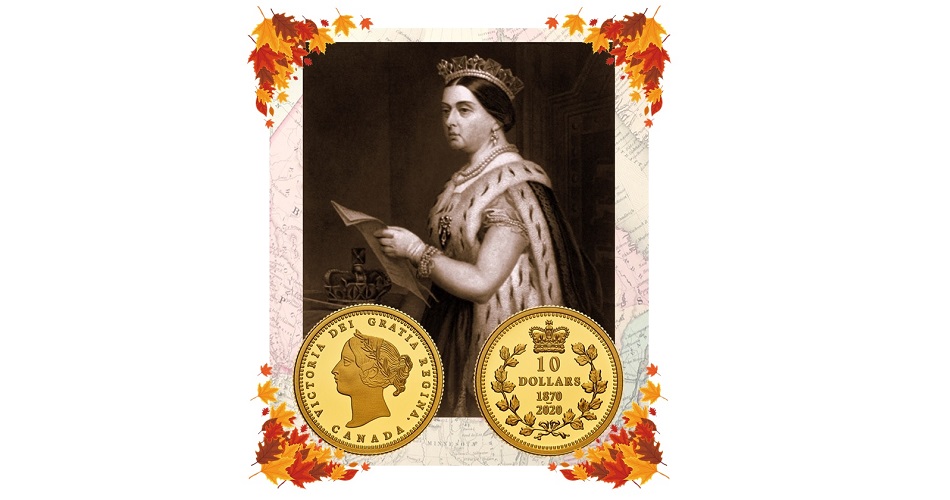 The Royal Canadian Mint has released new gold collector coins which remember the 150th anniversary of the release of their first national coinage in 1870. A national standard of coinage was issued three years after the confederation of the territories and colonies known as British North America, the smaller province known as Canada, and the former French colony of Quebec unified to create the Dominion of Canada. Continuing with the dollar as Canada’s currency, bronze, silver, and gold coinage were issued in similar denominations and specifications as their neighbour to the south, including short-lived silver five-cent and 20-cent coins.

Designed by Britain’s Royal Mint in London, the coins which were similar to previously issued coinage in the former British colonies, included two different effigies of Queen Victoria, who had been named Queen of all Canada, along with confederation. An earlier likeness of the Queen created by William Wyon was retained for the five and 10-cent coins while a revised portrait had been introduced onto 25 and 50-cent coins, which were new denominations for Canadian coinage. As such, a new effigy of the Queen was used for these two coins, who was portrayed wearing a diadem designed by Leonard Charles Wyon (1826–1891), chief engraver at the Royal Mint and son of William.

An intricately detailed and engraved wreath of maple leaves was featured on the reverse side which included the coins’ face value in the centre — seen on all four silver denominations. The reverse designs were carried over onto later coins issued during the reigns of King Edward VII, who succeeded his mother in 1901 and in 1911 for the coinage of King George V. Beginning in 1910, Canada’s coinage was produced in a new purpose-built mint located in Ottawa instead of the Royal Mint in London.

The design of the new gold Proof quality coins is inspired by the earlier coins from 1870, more specifically the five and 10-cent coins, which include a rendition of the laureate effigy created by Leonard Charles Wyon. The effigy is surrounded with the legend VICTORIA DEI GRATIA REGINA with CANADA shown below the Queen’s likeness.

On the reverse, the maple leaf branches consisting of 22 leaves, which made up a beautifully arranged wreath, is recreated with the coin’s denomination of 10 DOLLARS and the commemorative years 1870 and 2020 placed in the centre, with St. Edward’s crown placed above the denomination.

Each coin is encapsulated and presented in a maroon coloured standard custom case and includes a certificate of authenticity. For more information about this coin and others offered by the Royal Canadian Mint, please visit their website.