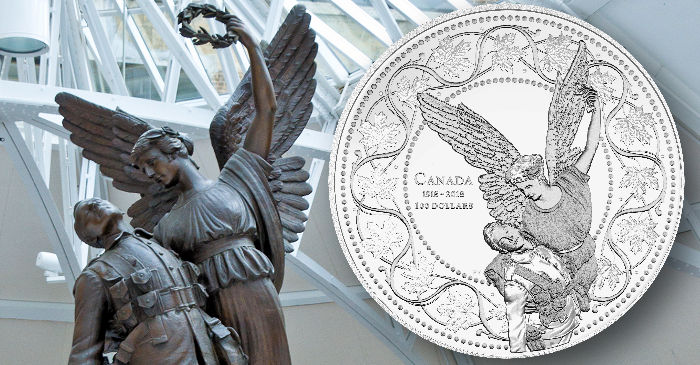 The Royal Canadian Mint have launched a new large-size silver coin which is in tribute to the 100th anniversary of the armistice which ceased hostilities of the Great War in Europe, later referred to as the First World War. Great Britain was in the alliance from the start of hostilities in 1914 which included the French Republic and Imperial Russia — later to include the armed forces of the United States. They were in opposition to the forces of Imperial Germany and the Austro-Hungarian Empire, who believed they needed to defend the actions of the assassination of the heir to the Austrian throne. Archduke Ferdinand and his wife had both been shot and killed in Sarajevo while on an official visit on the 28th June 1914. With the hostilities increasing and becoming more deadly, the armies of the British Empire and the Commonwealth were soon to be involved in defense of the motherland with the opening of several frontlines of fighting simultaneously.

These fighting forces included Canadian soldiers who fought valiantly in defense of Great Britain and the alliance in the face of a hostile and aggressive Imperial German war machine. The armies of Imperial Russia bowed out of the fighting when the centuries-old Czarist government collapsed with the abdication of Nicholas II in March 1917, which meant that the brave soldiers of countries such as Canada increased their participation. America’s participation in the fighting lessened the duration of the war and eventually lead to the dissolution of both the German and Austro-Hungarian Empires, as well as the Ottoman Empire, which sided with Germany in the conflict.

Ultimately, with the impending defeat of Germany and their axis looming, an offer of an armistice of hostilities was presented from Great Britain, France, and the United States to the military commanders of Germany and Austria-Hungary — which they accepted. In the wake of the abdication of Kaiser Wilhelm II, along with the many kings, grand dukes, and princes which composed the German Empire, as well as that of Austria’s new Emperor Karl on the 9th November 1918, the armistice came into effect “on the 11th hour of the 11th day of the 11th month,” and formalised the long-awaited end to the hostilities. In the early morning hours of the 11th November 1918, British, French and German representatives signed the armistice in the private railcar of French Marshal Ferdinand Jean Marie Foch. The railway carriage was preserved in a museum until June 1940, when it was deliberately returned to the site of the armistice for the signing of another armistice — one in which an occupied France was forced to surrender to the forces of the Third Reich. Although the armistice was a formal agreement to end the hostilities, or put into place a ceasefire, the actual declared war formally ended on the 28th June 1919, with the signing of the Treaty of Versailles — and exactly five years after the shot which was heard around the world.

However, in the weeks, months, and even years that followed, Canada and Newfoundland’s jubilant return to peace and the nation’s pride in its emerging identity on the world stage were encouraged by a strong desire of remembrance for all that was sacrificed and for all who were lost. In total, 619,636 Canadians served with the Canadian Expeditionary Force and one in 10 never returned, but for those who did survive the fighting, over 172,000 were wounded which included 9,000 who suffered from what was identified as “shellshock.” This newly discovered condition became a term for the psychological anguish caused by the wholesale level of casualties in the wake of modern warfare, and would later be known as post traumatic stress disorder (PTSD). As a dominion of the British Empire but not yet a part of Canada, Newfoundland had contributed 12,000 of its own to the effort and grieved the loss of many gallant souls as well, and Canadians and Newfoundlanders alike did not want to forget the human cost of such a devastating war. From 1919 to 1930, Armistice Day and Canadian Thanksgiving were celebrated on the same day which was the Monday of the week in which November 11 fell. However, in 1931, a bill was passed in the House of Commons to give Armistice Day a fixed date of the 11th November, and thus greater recognition, in Canadian society. The Canadian Thanksgiving day was moved to October and Armistice Day eventually became referred to as Remembrance Day, to honour the memory of all fallen combatants. 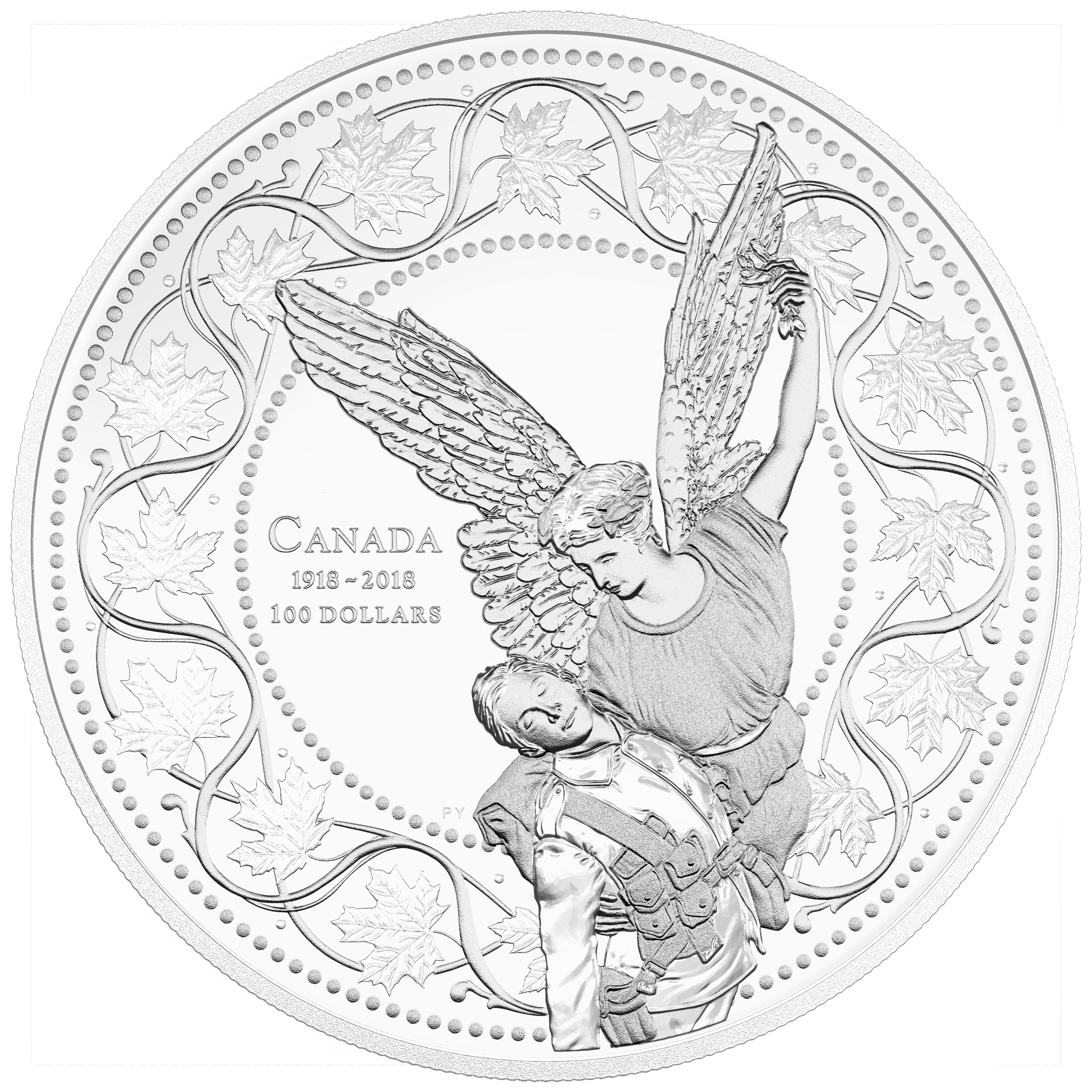 The design of the reverse side of the memorial coin depicts the Angel of Victory and is based on any one of three identical statues erected in Montreal, Winnipeg, and Vancouver. All three memorials are the work of Montreal-based sculptor Coeur de Lion MacCarthy, who was commissioned by the Canadian Pacific Railroad (CPR) to create a memorial honouring 1,115 railway employees who died during the war. Coin designer Pandora Young brings together several design elements that are rooted in history. The design’s focal point is a rarely seen overhead view of the Angel of Victory statue. Here the statue is a powerful reminder of the human cost of the war, embodied by the fallen Canadian combatant held by an ascending angel, who also holds a laurel wreath in her left hand. The two figures overlap the frame, which was inspired by Canada’s one-cent circulation coin at the time of the First World War (1914 -1918); a wreath of 16 maple leaves represents a contemporary twist on the maple vine design seen on all Canadian pennies between 1858 and 1920, while two rings of dots — one with 100 dots, the other with 140 — are kept intact from W.H.J. Blakemore’s classic design. The reverse includes the word CANADA, the double commemorative dates 1918 – 2018, and the face value 100 DOLLARS. 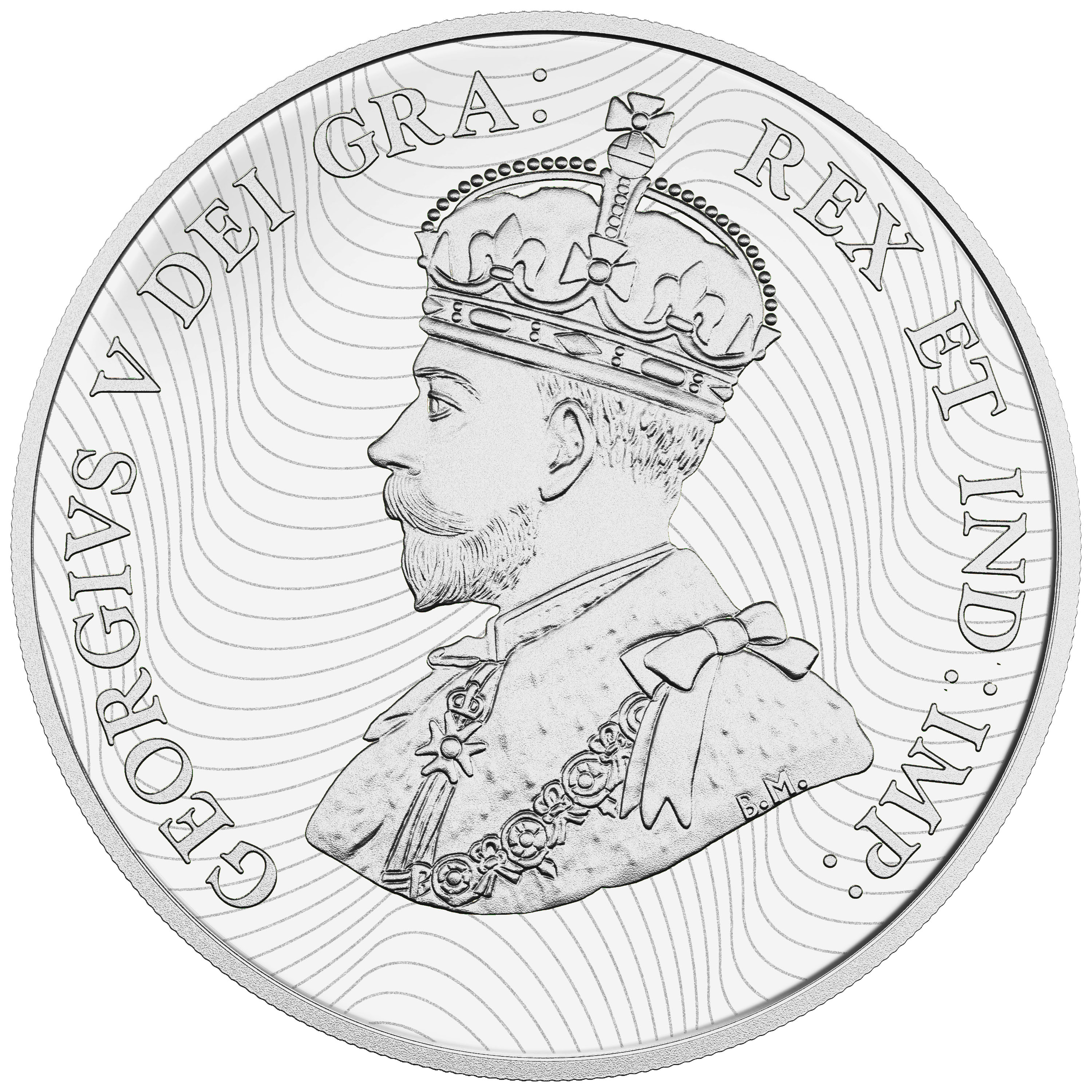 The obverse features the effigy of HM King George V, which was seen on Canadian coinage from 1911 to 1936, and created by Sir E. B. MacKennal.

The coin is limited to just 750 pieces and is encapsulated and housed in a custom Royal Canadian Mint-branded maroon colour presentation case protected by an outer box sleeve. For additional information on this coin and others available from the Royal Canadian Mint, please visit their website.