The Royal Canadian Mint have launched a coin which remembers both Canada’s participation in the Korean War (1950 – 1953) as well as the armistice which was agreed to in 1953 which brought the hostilities to an end. Though the armistice did not mean the war had concluded, the agreement, still in place today – guaranteed both sides the ability to develop their societies, economies and governments in peace.

The Korean peninsula had emerged from the Second World War as a country who had endured decades of occupation from Imperial Japanese forces. The northern half of the peninsula was advised by communist forces in China who had prevailed in 1949 by securing a victory over Republican forces led by Chang Kai Shek. The southern half of Korea had chosen a path of democratic principles and it was this side which United Nations armed forces supported in their endeavors for a government free of communist influence. Armed forces from more than 14 countries who made up UN forces fought against North Korean and Communist Chinese forces along with South Korean armed forces. On June 27, 1950, The United Nations adopted Resolution 83, recommending that members of the United Nations provide assistance to the Republic of Korea “to repel the armed attack and to restore international peace and security to the area.” The United Nations Command and the Chinese-North Korean Command signed the Korean Armistice Agreement on 27 July 1953, ending the heavy fighting and recognizing the 38th parallel as the demarcation border, also still in force today. 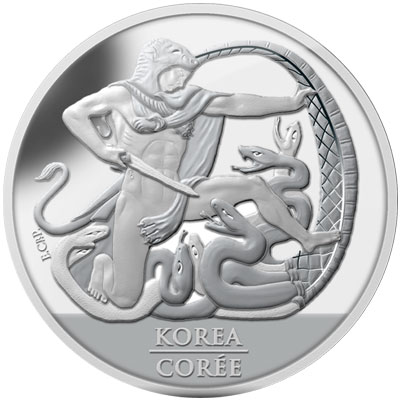 The coin which highlights this anniversary is a replica of the actual Commonwealth medal awarded to soldiers from the commonwealth who served in the conflict. The reverse includes a depiction of Edward Carter Preston’s original design of Hercules, feted warrior of Roman mythology, slaying the indomitable hydra-headed monster. This picture is an allegory for the perilous struggles of war, and a tribute to those who freely go to battle. The original engraving of “KOREA” on the medal has been expanded to include “CORÉE” reflecting Canada’s official status as a bilingual nation. The obverse features the same effigy that appeared on the original medal, that of Mary Gillick’s 1953 portrait of Her Majesty Queen Elizabeth II, which was in use on Canadian coins in this time period.

By preserving the central design of the original Korean War Medal awarded to Commonwealth forces who served in the Korean War and donating part of the proceeds from the sale of each coin to Canadian Korean War Veteran organizations, the Mint is remembering and thanking thousands of Canadian men and women for their historic efforts and sacrifices.

Please visit this page to view these coins as well as the most recent product releases from the Royal Canadian Mint. Information offered in English and French, international orders fulfilled.