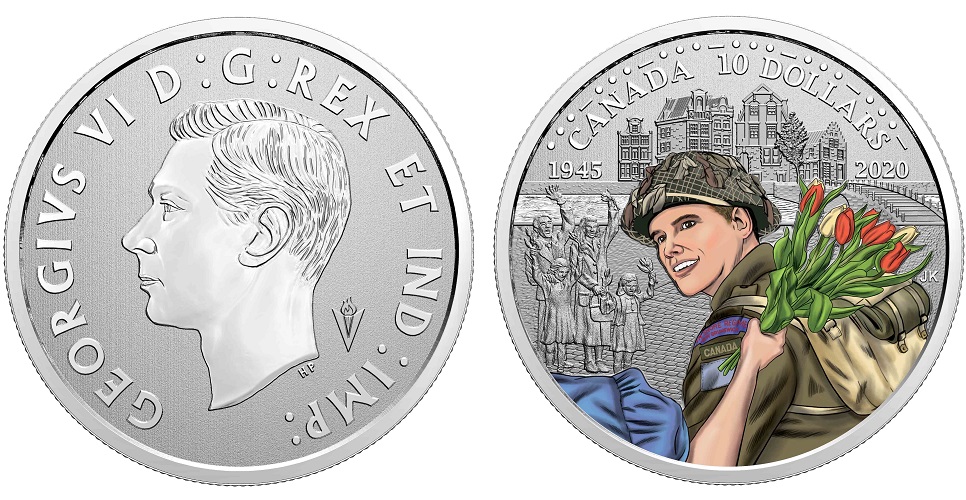 The Royal Canadian Mint has released new collector coins that are in remembrance of a very special anniversary connecting two countries with an act of courage and bravery which remains, for many, the ultimate in sacrifice and heroism.

The saying “A life saved is a bond forged” applies when the bond is between individuals, then it is multiplied many folds when the saving of lives occurs between nations and peoples. This special bond, which exists with the peoples of Canada and the Netherlands, stems from the liberation of the Dutch during the Second World War. After the declaration of war by the European allied forces in November 1939, armies of the Third Reich planned an invasion of the Low Countries of Belgium, Luxembourg, and the Netherlands along with neighbouring France. The assault began on the morning of the 10th May 1940 when armoured tanks and aeroplanes of the Luftwaffe mounted their offence on peaceful towns and cities. As the Dutch Government sought safety in exile, the country’s beloved Queen Wilhelmina escaped to London aboard a British Frigate dispatched on the orders of King George VI. The heir to the Dutch throne, the Queen’s daughter Princess Juliana, her husband Prince Bernhard, and their young family, made their way to Canada. She remained in Canada for the duration of the war, in fact, her third child, HRH Princess Margriet, was born in Ottawa, Canada, on the 19th January 1943, becoming the only royal princess ever born in Canada. However, to ensure the newborn princess would have Dutch citizenship and her place of succession to the Dutch crown, Canada temporarily disclaimed the four-room suite at the Ottawa Civic Hospital by declaring it unaffiliated international territory of the Netherlands.

Almost immediately, a system of underground resistance movements was emerging that began missions of espionage against the occupation and became very successful at their endeavours. For this success, the Dutch people paid a hefty price as the repercussions were harsh and brutal. One particularly brave member of the Dutch resistance was Canadian Mona Louise Parsons (1901-1976). For her incredible courage, she received commendations from General Eisenhower and Air Chief Marshall Tedder of the Royal Air Force.

The beginning of the end of the war in Europe came with “D-Day.” The Battle of the Scheldt became a significant milestone in the shared history of the Netherlands and Canada. In the west of the Netherlands, the 1st Canadian Corps would be responsible for the liberation of major cities like Amsterdam on the 7th May and Rotterdam and the Hague on the 8th. The final Dutch location to be liberated, on the 11th June, was the island Schiermonnikoog, regarded as the last battlefield in Western Europe.

With the surrender of the Third Reich on the 5th May 1945, the war in Europe was at an end. Queen Wilhelmina, who had frequently spoken to her countrymen over the radio during the occupation, travelled back to the southern part of her country in March 1945 and returned to the capital on the 6th July to a rapturous welcome by her people. As an ever-lasting tribute to the part of Canadian forces in liberating the Netherlands, the tulips that bloom in Ottawa are the most visible symbols of the historic relationship between Canada and the Netherlands. The tradition began just after the war, when the-then Princess Juliana gave thousands of Dutch tulip bulbs in recognition of Canada’s hospitality to her and assistance throughout the war, the tradition still continues. The two countries continue to share very close ties as nearly 2,000 Dutch war brides married Canadian servicemen and immigrated to Canada after the war. Today, roughly 3% of Canadians, or just over one million, claim Dutch descent. 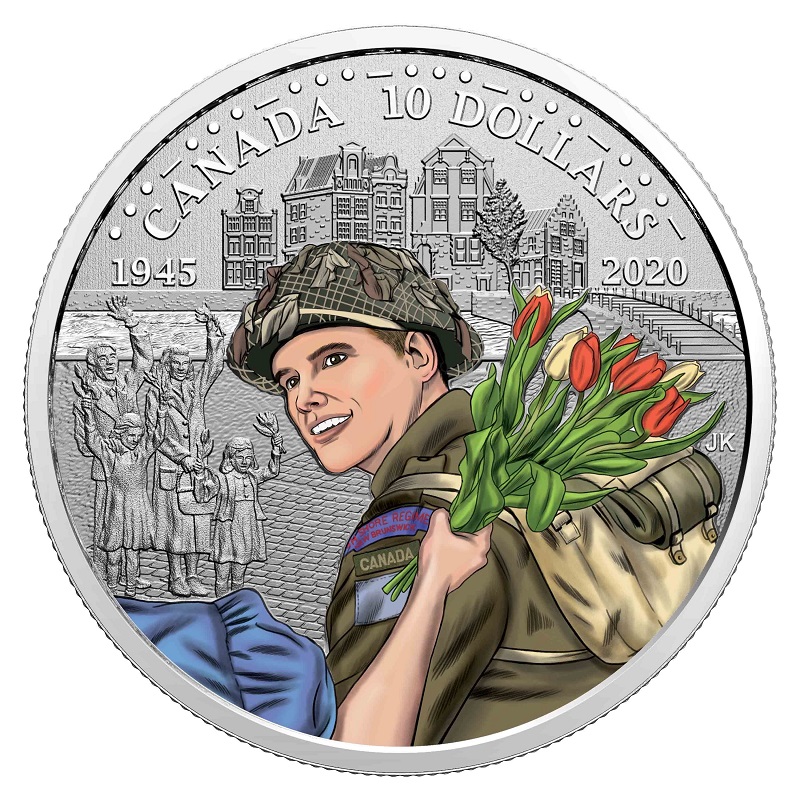 Designed by Joel Kimmel, the reverse design uses selective vivid colour to highlight a warm exchange between the young man, a soldier of the First Canadian Army, and a Dutch civilian during the Liberation of the Netherlands in March 1945. The woman offers a gift of tulips to the Canadian infantry soldier, who is happy to see a friendly face. In the engraved background, a small crowd has gathered to cheer and wave at the Canadians as they travel along a canal street. The top features a repeating “V” for Victory in Morse code above the words CANADA 10 DOLLARS. 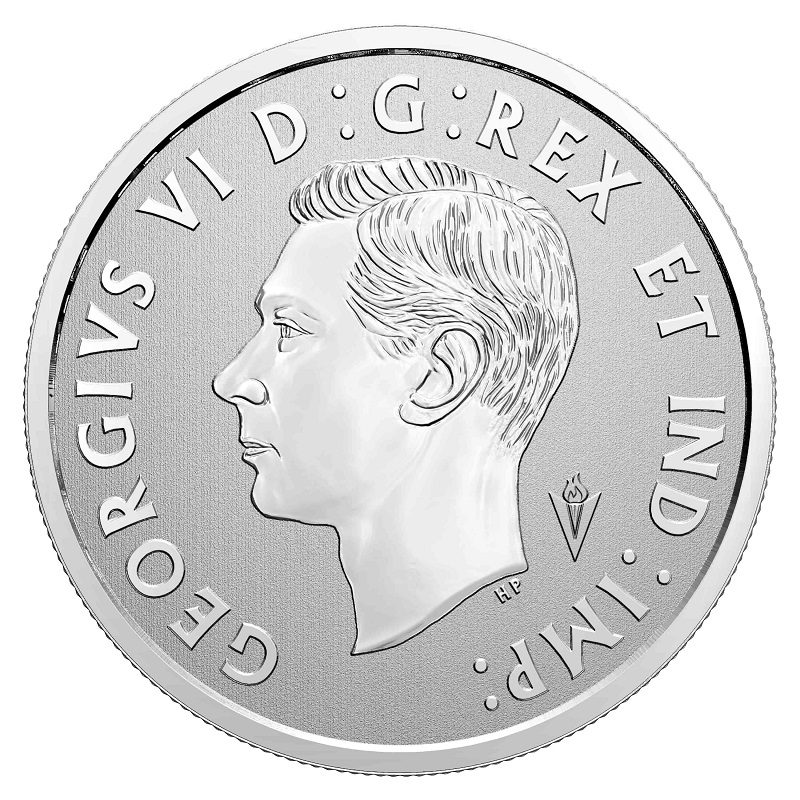 The obverse features a recreation of the effigy of King George VI created by Thomas H. Paget, which was depicted on all Canadian coinage from 1937 to 1952. The small Victory privy mark is shown just to the right of the King’s likeness. The victory privy mark is displayed on all coins in Canada’s 2020 75th Anniversary of V-E Day Collection, including this one, which features a special privy mark that was inspired by the 1945 Victory nickel reverse design. 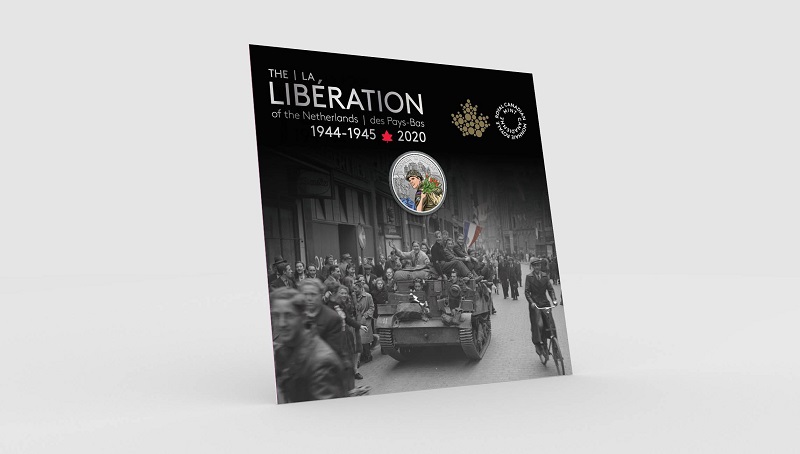 The Victory coins are presented in a colourful folder with informative text and historic images of the liberation by Canadian Forces in 1944-1945. For additional information about this coin and others available from the Royal Canadian Mint, please visit their website.

This same coin design without colour is included in the special three-coin Liberation Anniversary Set offered by the Royal Dutch Mint.

Netherlands to issue 2020 gold ducats by reservation only