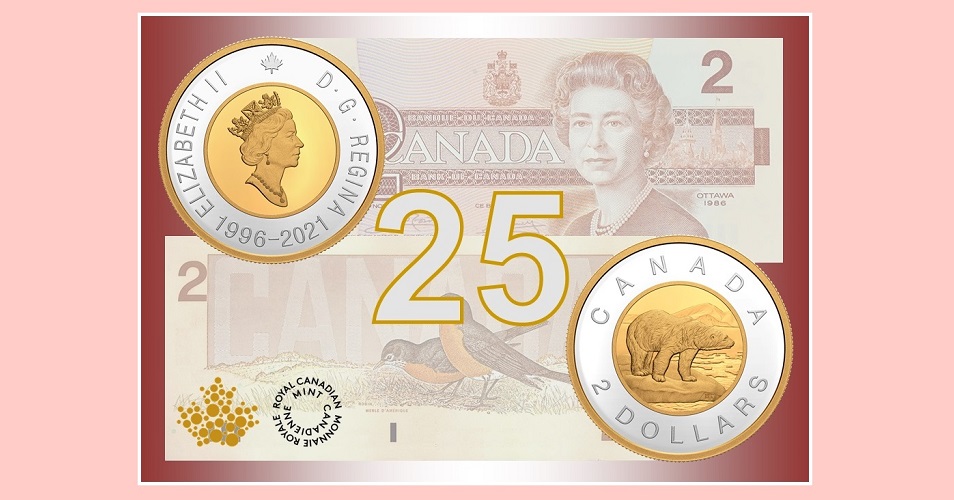 The Royal Canadian Mint has launched a new banknote and coin set on the occasion of the 25th anniversary of the release of Canada’s first $2 circulation coin. The Bank of Canada’s $2 banknote was issued as a definitive denomination since the establishment of national currency issued by their authority in 1935. They have been part of five specific banknote series with the last $2 banknote having been issued in 1986 as part of the “Birds of Canada” series. As a measure of cost-saving, the Bank of Canada decided to discontinue the issue of this banknote denomination and transition it onto a circulation coin. 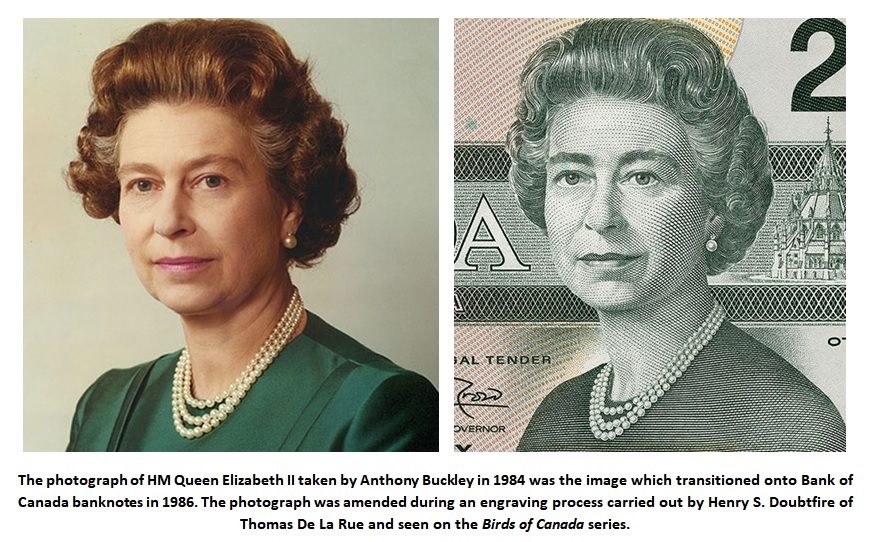 $2 banknote 1986. The face of this dark red banknote included a portrait of Canada’s sovereign, Queen Elizabeth II, who was first portrayed on Canadian banknotes in 1954. The image of the Queen was based on a photograph by Anthony Buckley (1912–93), believed to have been taken in 1984. Considered to be one of the most informal portraits of Queen Elizabeth to be used on any banknote, it was also commented at the time to have been one of the most flattering of the mature monarch, who was 58 years old at the time. The photograph was slightly amended through the process of engraving which was executed by Henry S. Doubtfire of Thomas De La Rue. The original photograph and later engraving show Queen Elizabeth II wearing a dress with a plain neckline and a three-strand pearl necklace which was given to her by her grandfather King George V on the occasion of his Silver Jubilee, on the 6th May 1935. The resulting portrait was later included on three denominations in the “Birds of Canada” series, the $2, $20, and $1,000 banknotes. Shown to the right of the Queen’s portrait on the $2 banknote is an image of Canada’s Parliament on Parliament Hill in Ottawa. Centred towards the top of the note is the coat of arms of Canada.

The back featured an engraving of two robins in front of the text CANADA. Below the depiction of the robins was the serial number shown twice along with bar codes which were added to this series of banknotes to aid in counting and sorting electronically. 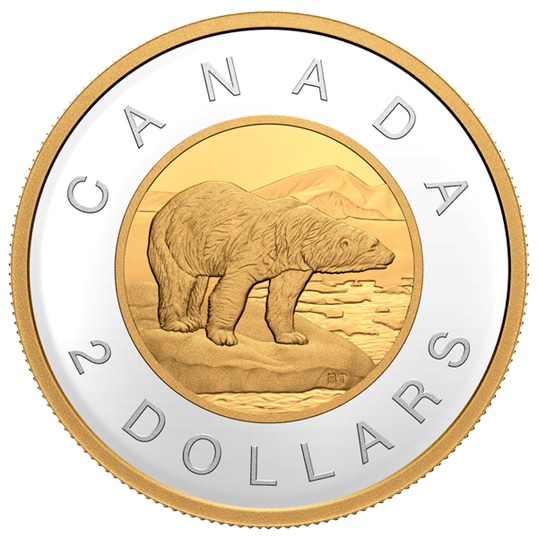 $2 coin 1996. The first $2 circulation type coins were released on the 19th February 1996 and are minted using a patented distinctive bi-metallic coin-locking mechanism. Referred to colloquially as the toonie, it is a devised word combining the number two and attaching the word loonie, a slang word for the Canadian one-dollar coin — so-called due to the loon bird depicted on the reverse. There had been suggestions the coin should be referred to as “Nanuqs” in honour of the polar bear standing on an ice floe depicted on the reverse. An informal national competition to name the bear resulted in the name “Churchill,” a reference to the common polar bear sightings in Churchill, Manitoba, but the toonie simply stuck with Canadians. The obverse side depicted an effigy of HM Queen Elizabeth II created by Canadian artist Dora de Pedery Hunt, which was introduced onto Canadian circulation coinage in 1990. 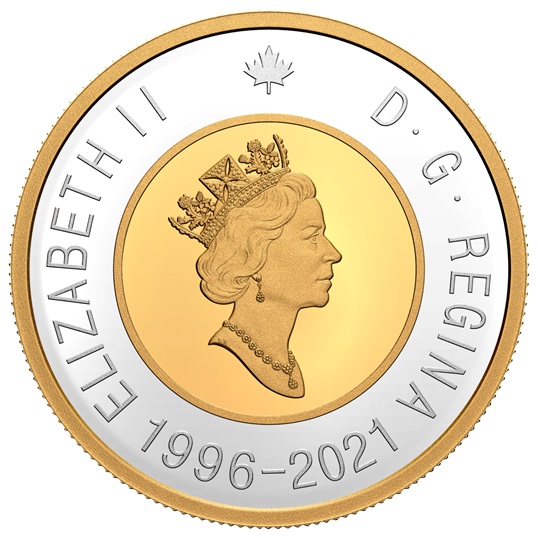 With the introduction of the $2 coin, the $2 banknote was officially withdrawn from circulation on the 16th February 1996, three days prior to the toonie’s introduction and to facilitate the widespread use of the coin. In preparation for the coin’s introduction, the Royal Canadian Mint had produced 275 million coins at their Winnipeg facility. Since their introduction, the $2 has become a favourite or preferred denomination for commemorative purposes with more than 17 special designs having been introduced into circulation since 1999.

The commemorative set includes a replica coin minted in pure silver and is accompanied by an Uncirculated Bank of Canada 1986-dated $2 banknote. The silver Proof coin includes the original design seen on the $2 from 1996, along with the effigy of the Queen then used on the coins in 1991. The design also includes pure gold plating to enhance the bi-metallic structure of the coins. The $2 banknote’s serial number showing the prefix BRX identifies it as a replacement banknote issued if a regular note was damaged or destroyed during the printing process. Replacement notes rarely enter circulation and these banknotes included in the set were stored in Bank of Canada vaults for the last 25 years. As of the 1st January 2021, all Canadian $2 banknotes including those which are part of this set are no longer legal tender but, as with all Bank of Canada banknotes, they can be redeemed for new legal tender without a time limit. 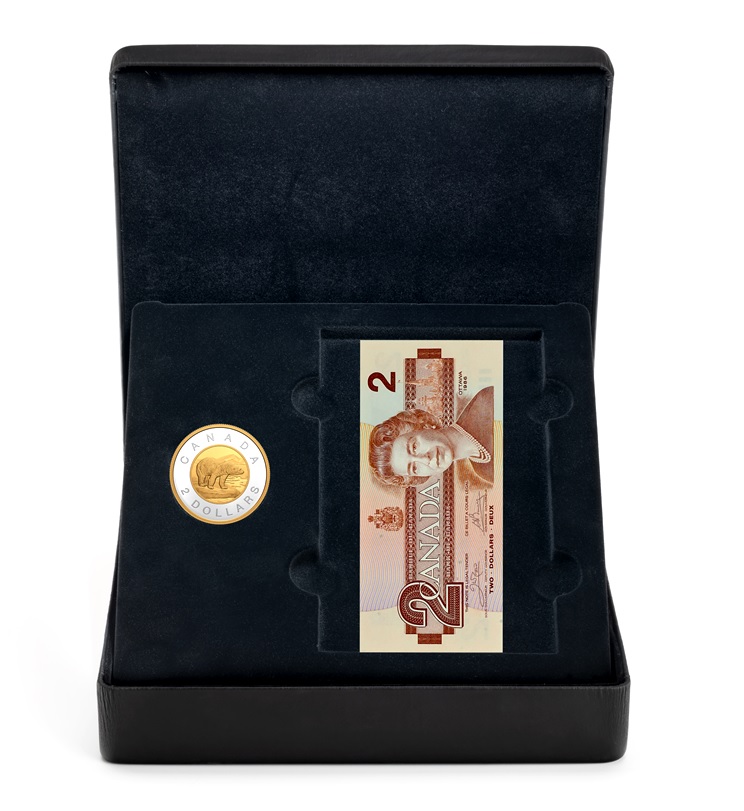 Each $2 coin and banknote is individually encapsulated and presented side by side in a Royal Canadian Mint-branded custom case along with a black outer protective box. For more information about this coin and other coins released by the Royal Canadian Mint, please visit their website.

Shipments of this item will commence from the 4th October 2021