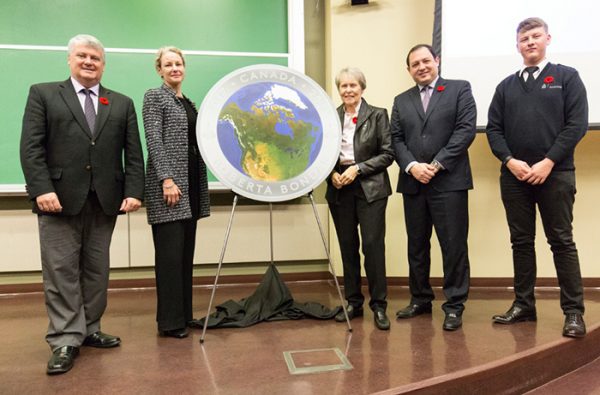 On November 1, the Royal Canadian Mint launched a celebratory coin that remembers the day Canada’s first female astronaut blasted off into space: January 22, 1992, aboard the United States space shuttle Discovery on mission STS-42. Twenty-five years later, Canadians celebrate her inspiring accomplishment with the world’s first-ever curved and glow-in-the-dark silver coin, which was unveiled by Dr. Bondar and Royal Canadian Mint president and CEO Sandra Hanington at a ceremony hosted by Sault College. Dr. Bondar will always be remembered as a pioneer among Canada’s modern-day explorers, not only as the country’s first woman astronaut but as the first neurologist to fly in outer space. (More about the launch of both the mission and the commemorative coin can be found after the coin specs.) 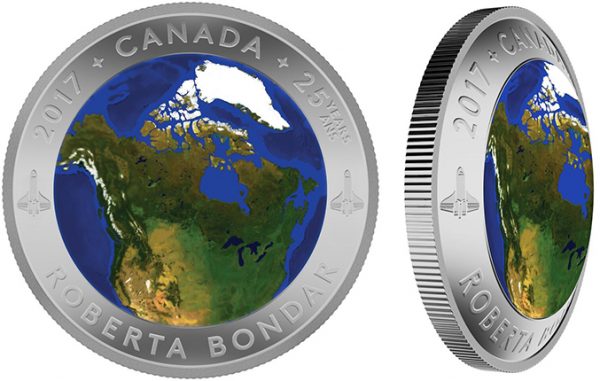 The coin is the first convex (or domed-shaped) coin to also incorporate a glow-in-the-dark addition. The reverse design was created by Canadian artist Alexandra Lefort, who combines vivid color with glow-in-the dark effects and technology to recreate a breathtaking view of Earth from space, with a direct focus on Canada. The outer band framing the coin’s central design features Dr. Bondar’s name along with text highlighting the anniversary of her space mission, as well as a miniature depiction of the space shuttle Discovery as it appeared on the mission crest of STS-42 crew members. 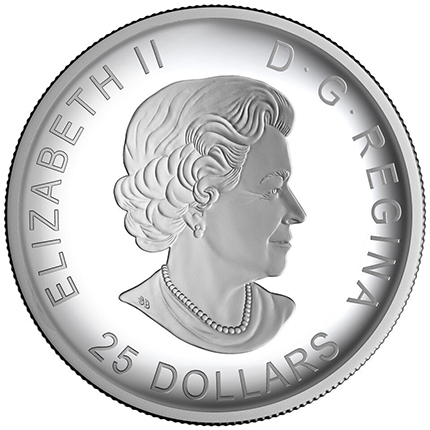 The concave obverse includes an effigy of HM Queen Elizabeth II designed by Susanna Blunt and in use on all Canadian circulation and most collector commemorative coins since 2003.

The coin will be available for purchase from the Royal Canadian Mint’s website shop as well as in their retail stores in Ottawa, Winnipeg, and Vancouver, or from authorized dealers including participating Canada Post outlets. For more information on this and other coins offered by the Royal Canadian Mint, please visit their website.

[A Guide Book of Canadian Coins and Tokens]

Space shuttle mission STS-42 was launched January 22, 1992. Lift-off was slightly delayed due to weather constraints; once the outbound flight was successfully completed, Discovery docked with the Spacelab module. The primary function of the mission was to study the effects of microgravity on a variety of organisms. The eight-day mission concluded with the shuttle landing on January 30, 1992, at Edwards Air Force Base in California. Dr. Bondar was the only woman on board, and part of a crew of seven that included five astronauts from the United States and one astronaut from Germany, on loan from the European Space Agency (or ESA).

During the special coin-launch ceremony, Dr. Bondar commented “My view from Discovery 25 years ago forever changed my view of Earth and instilled in me a commitment to protect this magnificent planet. This special coin symbolizes the beauty of Earth from space.”

“We need to celebrate our milestones and pioneers as we push the frontiers of discovery,” said Sandra Hanington. “The government of Canada is pleased that [Dr. Bondar’s] achievement of 25 years ago and her ongoing dedication to science have been permanently honored by the Royal Canadian Mint.” She further commented, “The Mint is proud to celebrate the 25th anniversary of Dr. Bondar’s historic mission with a coin as innovative as what she achieved for women and all of Canada.” 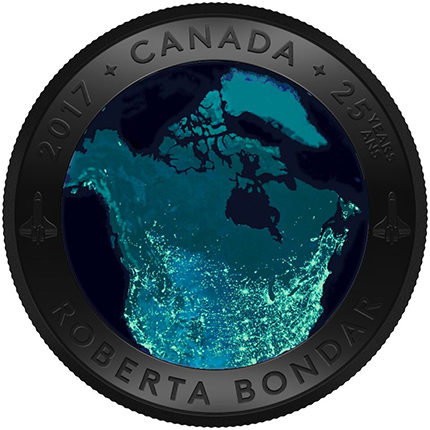