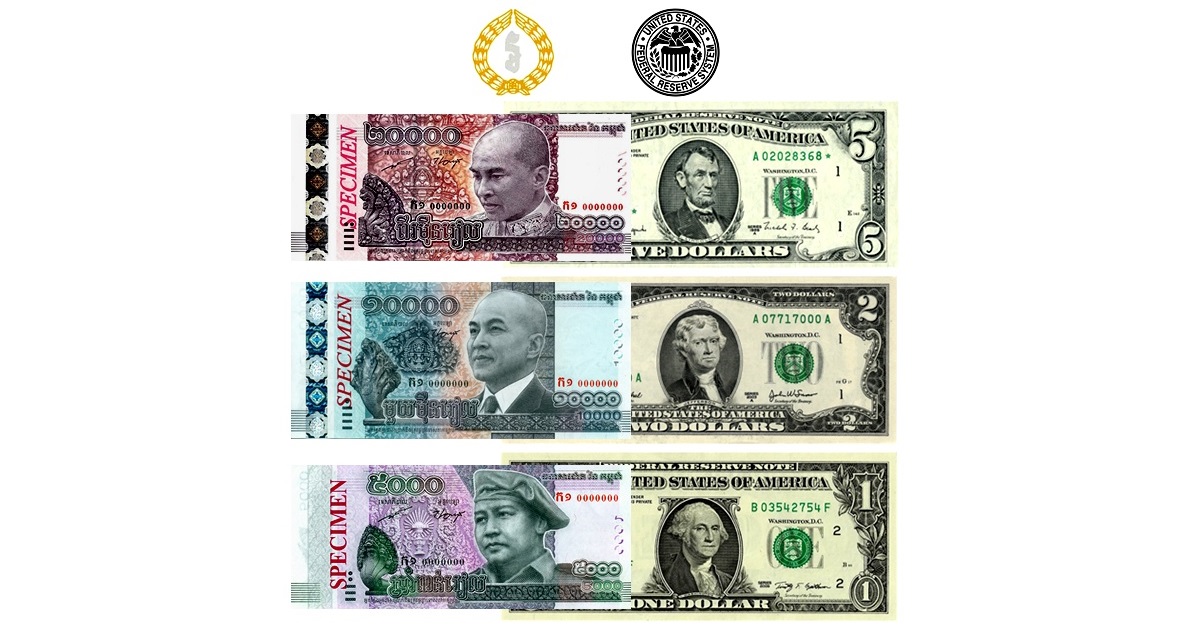 The National Bank of Cambodia has launched a plan (28th May) in which they are asking commercial banks and microfinance institutions to send it their smallest U.S. dollar banknotes to their offices for processing and transporting outside the country. In an effort to withdraw these smaller U.S. notes from commerce and support their currency, the Riel, The National Bank cited the notes are difficult and costly to manage in terms of processing and transport.

Speaking at the meeting, National Bank of Cambodia Director-General Chea Serey commented the National Bank confirmed they found the three smallest denominations of one, two and five U.S. dollar banknotes challenging to manage and conceded there is little demand for the overall in the Cambodian economy.  Currently, the official National Bank exchange rate of one U.S. Dollar equals just over 4100 Riels, and as such, 5000 Riel notes could easily replace one dollar banknotes which routinely circulate. An updated series of the most commonly used riel banknote denominations were issued from 2013 to 2018, and Riel coins are seldom used.

The National Bank confirmed there would be a three-month deadline beginning from the 1st June for commercial Banks and Microfinance institutions to collect their supply of these notes and return them to National Bank central offices. Here, they will be processed one final time and transported outside the country to additional destinations. While the three-month transition period is in effect, ending on the 31st August the National Bank have confirmed there will be no additional charge for this service. After the deadline expires, the cost of processing these notes will be passed onto these Banks and institutions.

As technically, the National Bank is the only authorised institution permitted to import or export the U.S. Dollar, they have done this by bringing in new larger banknote denominations of ten Dollars and above directly from the Federal Reserve. The smaller denominations are mostly brought into the country from foreign tourists and through commerce between cities and towns along the country’s borders with neighbouring countries.

Despite the National Bank’s discouraging the use of one, two and five U.S. Dollar banknotes, their use is not officially banned, and retailers or small kiosks may accept them at their discretion. This advice has also been offered by the Country’s Prime Minister who sought to clarify to the public that the smaller U.S. banknotes are still acceptable in the Kingdom and should not be refused if offered. With these moves to withdraw the smallest U.S. notes, the National Bank is also seeking to increase the use of the National currency, the riel, and strengthen its independence and exchange rate against the U.S. Dollar. By removing the smaller U.S. notes which have also become dirty and torn due to their frequent use, the National Bank expects their own notes ranging from 500 to 100,000 Riel denominations to take the place of the Dollar. U.S. currency used within the Cambodian economy has also been seen as a deterrent to using the national currency.

In the last six months, the riel has depreciated noticeably against the U.S. dollar and with the current economic slow-down worldwide due to the pandemic arising from the spread of the Wuhan-strain of COVID-19, the downward spiral has continued. As most Cambodians generate their income in riel, an increase in its buying power would be a welcome result in the National Bank supporting the currency.

Representatives of Commercial Banks and Microfinance organisations attending the meeting confirmed they have substantial reserves of the small-dollar notes and their demand had decreased. As such, the decision by the National Bank to remove these notes from everyday use has been welcomed by them, adding they could easily substitute U.S. notes’ use with the riel. Some representatives commented they saw the primary challenge of their customers to encourage the use of the riel for savings purposes or as an asset and store of wealth. The National Bank added during their briefing there would be no charge for accepting and processing 10 Dollar banknotes or larger denominations. There will continue to be an ongoing discussion with commercial banks and Microfinance institutions to determine a precise date for the National Bank to stop accepting the small U.S. dollar banknotes altogether.

For additional information on currently used riel banknotes and coins in circulation, please visit the website of the National Bank of Cambodia.