One of several classic commemorative coins with a California motif, the California-Pacific International Exposition (or more popularly San Diego) Commemorative Half Dollar was issued to mark the California-Pacific International Exposition held in San Diego, California in 1935 and 1936. Struck in 1935 at the San Francisco Mint as well as the following year at the Denver Mint, it is an issue that had a rather generous mintage and is now considered to be among the more common classic commemorative half dollars, even in high-grades such as MS-65 and MS-66.

The California-Pacific International Exposition was also known at the time as “America’s exposition”. Initially only planned for 1935, it was held in San Diego’s iconic Balboa Park, known for (among other attractions) the San Diego Zoo. The exposition was meant to improve San Diego’s economy, which was still in a slump after the Great Depression. Balboa Park had also been the site of the 1915-16 Panama California exposition (held at the same time as the better known Panama-Pacific exposition in San Francisco) and many of the buildings of that exposition were still in place.

Balboa Park, the site of the exposition, is a 1200 acre park in downtown San Diego. One of the oldest parks in the nation, land was reserved for recreational uses as early as 1835, when the city was still Mexican. Part of this land would later become Balboa Park. The park as it is today was not created until the 1860’s, and modifications were made in the following years. The two expositions in the early 20th century left their mark, and many of the buildings and gardens remain in existence until this day. Among the buildings built specifically for the 1935 exposition were the Old Globe Theatre (burned down in 1979 but later rebuilt), the Ford Building (now the San Diego Air and Space Museum) and the Ford Bowl, which is know known as the starlight bowl.

Several buildings of the 1915 exposition would be used in the 1935 and 1936 expositions as well. Among these were the California Building and the St. Francis Chapel that also appear on the commemorative half dollar presently being discussed. The buildings of the former exposition were designed in a Spanish Colonial Revival style, but the buildings specifically build for the 1930’s exposition were done so in a more modern style, such as the Ford Building which was shaped as a V8 engine. Ford Motor Company was a major contributor to the exposition, hence their name being associated to several of the buildings.

The exposition was open from May 29, 1935 to November 11, 1935. Less than a month before the opening of the exposition, on May 3, legislation was passed which authorized the minting of commemorative half dollars, no more than 250,000 in number. The relatively high number was meant to eliminate any potential speculation, which was all too common when it came to commemorative half dollars at the time. Production occurred at the San Francisco Mint in August of the same year, when a total of 250,000 coins were indeed produced, which would be sold to the general public at the exposition for one dollar each. Sales were slow; because of the high number of authorized pieces few dealers sought to purchase the issues, and collectors were satisfied with owning a single coin for their collection. 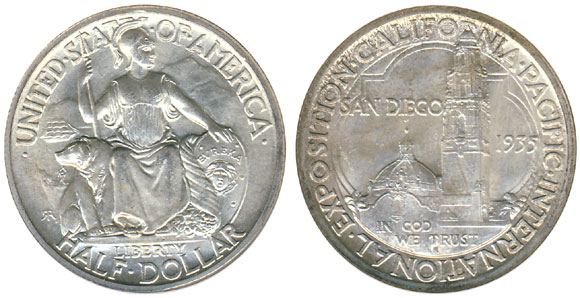 The San Diego Commemorative Half Dollar as it is popularly known was designed by Robert L. Aitken. The obverse was based on the arms of the State of California and featured a seated Minerva, goddess of wisdom, looking to her left. Her right hand is holding a spear while her left hand rests on a shield with an image of Medusa. Directly above the head of Medusa, on the shield, is the word “EUREKA”, meaning “I’ve found it”. Next to the shield is a cornucopia, signifying abundance. On the other side of Minerva is a grizzly bear, and in the background we see a miner and a ship in a harbor. Above all this is •UNITED•STATES•OF•AMERICA• and directly under Minerva is the word LIBERTY. The denomination, HALF•DOLLAR, is along the bottom rim.

As previously mentioned the reverse features two buildings of the exposition, the California Building (on the right side) and the St. Francis Chapel (on the left). Next to the California building is SAN DIEGO and the date. Below the buildings is IN GOD WE TRUST and the mintmark. A simple design encircles the building and along the rim, starting at about 11 o’clock and going clockwise is •CALIFORNIA•PACIFIC•INTERNATIONAL•EXPOSITION.

Approximately 68,000 of the 1935-S San Diego coins were sold before sales virtually stopped. The distributor of the pieces, the California-Pacific International Exposition Commission came up with a bold plan that would be frowned upon by many. Legislation was sought which would call for the melting of the unsold 1935-S San Diego Commemoratives still on hand, whose silver would be used for the mintage of a new issue struck at a different Mint. And thus, on May 6, 1936, congress authorized an additional 180,000 San Diego Commemorative Half Dollars to be struck, all dated 1936, and all minted within one year after the act was enacted at one Mint of the United States. A minimum of 5,000 coins were to be issued, but all 180,000 pieces would be struck at the Denver Mint. Unsurprisingly sales were very slow, despite the fact that the exposition opened for a second time from February 12 to September 9, 1936, and 150,000 pieces would later be returned to the Mint for melting. This left total mintages of 70,000 coins for the 1935-S and 30,000 for the 1936-D.

Neither the 1935-S nor the 1936-D issue is particularly scarce in any grade up to the gem level, and even MS-66 pieces are frequently encountered. As the mintages would suggest the 1935-S is more often encountered, although the price difference is minimal, making the 1936-D generally a better deal. One thing of note is that the strike and luster is generally a bit nicer on the 1935-S, making that date the coin of choice for quality conscious type collectors. One minor variety is worth mentioning, FS-101, which is a D/D repunched mintmark for the 1936 issue, and a quadruple die obverse. Variety collecting of classic commemoratives is not very popular and this coin only trades for a modest premium. Many remain unattributed in holders and it is unknown exactly how scarce this variety is, making pricing difficult, but also providing plenty of opportunity to find this variety offered as a normal San Diego Commemorative Half Dollar.