Editor’s Note: Coingrader Capsule occasionally runs series, such as “Crossover-, Under- and Out,” about submitting coins graded by one company to another company, either to enjoy a premium or to qualify the coin for set registries. Earlier we ran three posts about Certified Acceptance Corporation, a numismatic firm whose speciality is identifying high quality coins holdered by NGC and PCGS. This is the final installment, assessing the CAC experience and noting how the CAC sticker helped identify a fake PCGS holder and coin.

Read part one, part two, and part three of this article series.

To be sure, I had mixed feelings about CAC, believing that its green sticker was just another marketing gimmick in an already market-saturated numismatic world.

NGC recently raised its rates to match those of PCGS, which includes supplies (cardboard mailers and boxes) when it returns graded coins, and it will be interesting to see if NGC does this as well. (I predict that it won’t.) NGC also stopped grading crossovers in holders other than PCGS, requiring submitters to crack out coins and potentially damage them. Boo. Although I am a regular PCGS customer, I think that company has harmed the hobby by not awarding the plus designation on coins submitted through its economy level (taking a record 45+ days this month with some of my submissions).

The CAC experience reminded me of how PCGS and NGC used to operate: simply, with less marketing, and quickly, with fewer excuses.

I found the entire submission process to be exceedingly easy and its customer service, helpful and proactive.

During the course of my CAC analysis, I was bidding on a consignment offered by Culpepper Auction through the portal Proxibid. 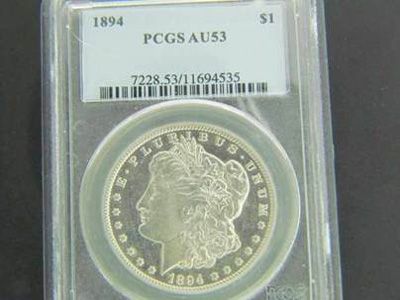 I viewed the rare 1894 Morgan Dollar pictured here graded AU53 in a PCGS holder whose font was as suspicious as the grade. Look at the coin without the CAC sticker. It looks deep mirror mint state, not almost uncirculated. 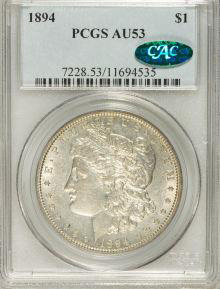 I did some research and found the authentic coin, pictured above. Notice it has the same certification number as the fake … but with a CAC sticker.

That was the give-away. The Culpepper lot was a fake.

I wrote Proxibid and the auctioneer, with whom I had done good business in the past, explaining, “One never knows how these fake coins show up in an auction. But the existence of one in a consignment calls attention to the specter of more, and so I will be withdrawing all my bids today from your auction. In an article in the National Auctioneers Association magazine, I’ve advised auctioneers to create a consignment agreement form that informs sellers it is illegal knowingly to sell counterfeit coins and that if the auctioneer is informed of such, with credible evidence, that funds will be returned to the buyer. Because you are not including obverse and reverse photos of coins in your auctions—something I have been asking Proxibid to require, in the interest of authenticity and its corporate reputation—I cannot tell if your other PCGS or self-slabbed coins are fake.”

Initially, it took lots of effort to get Proxibid’s attention–something I am unaccustomed to, as the portal has always been ultra responsive to my requests and advice. After I sent several emails noting it was illegal knowingly to sell a fake, a Proxibid executive sent me this message:

“Michael, as we can’t be 100 percent positive its not a real coin we must give the auction company the benefit of the doubt. They are required to represent the coin accurately and are in a much better position to verify the coin. We take action if we see a trend in complaints for counterfeit items or in cases where its obviously a scam. We do reach out to educate but, in the end the auctioneer make the call in cases like this.”

To persuade Proxibid, I emailed the pictures here to top numismatist Ron Guth, president of PCGS CoinFacts, who responded: “The top coin is clearly in a fake holder. Though I cannot address the authenticity of the coin itself, I strongly suspect it is a fake as well.”

Thereafter things went swimmingly with both Proxibid and Culpepper Auction. The Proxibid exective who sent me the above message told me that the company was working behind the scenes with the auctioneer, based on my information. The auctioneer also removed the item from the online sale.

When he did, I reinstated my bids.

Upon my doing so, the auctioneer thanked me and promised in “future auctions to have multiple photos of the coins. We are a small family run business and time is never on our side, but I do appreciate the suggestion and recommendation.”

Culpepper Auction, in my view, is a responsive online seller with whom I plan to business again soon.

To its credit, Proxibid also sent me a note of thanks, which I appreciated.

But the experience also suggested why the CAC process and stickers might be valuable beyond affirming the grades of top-tier companies. Chinese counterfeits are inundating our market. I have no doubt that CAC can help confirm fake holders as well as coins, another useful service that no one to my knowledge has written about. (I had sent questions to that effect for company founder John Albanese to address, but he has not responded.) Nonetheless the sticker and the photo (from a previous Heritage sale) were solid proof that the 1894 was a fake.

In a numismatic world dominated by fees and fakes, I think CAC is providing an valid service by focusing on the coin, not the hype.