The Government of the British Virgin Islands have launched today (7th September) an unusual and “first” in numismatics which marks an important centennial anniversary of one of the most important ancient Egyptian finds. To commemorate the 100th Anniversary of the discovery of Queen Nefertiti’s Bust, this unique coin has been produced in the shape of the famous and most celebrated recognizable artifact. 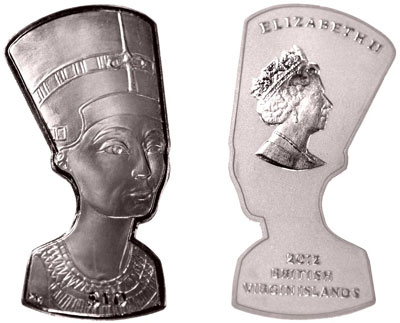 Believed to have been crafted in 1345 BC, the bust was discovered in 1912 by Ludwig Borchardt in Amarna, Egypt. Queen Nefertiti, the Great Royal Wife of the Egyptian Pharoah Akhenaten, was given many titles including Hereditary Princess, Lady of Grace, Great King’s Wife and Mistress of Upper and Lower Egypt. Her name in hieroglyphs translates as Beauty of Aten, the Beautiful One has Come. Nefertiti and her legend was made famous by her bust which is a 3,300 year-old painted limestone bust.  This bust has become one of the most copied works of art of Ancient Egypt and has made this Egyptian Queen one of the most famous women from the ancient world possibly with the exception of a later Queen of Egypt, that of Cleopatra. 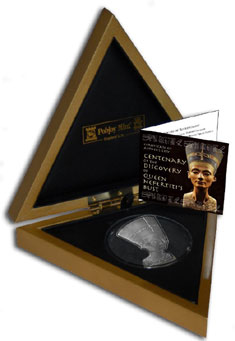 Struck by the Pobjoy Mint in the UK, this extraordinary tribute is produced in .999 fine Silver and struck in the shape of the famous and historical find which in itself is a work of art.  Each coin is struck four times to achieve an exceptional proof quality. The reverse design is an exact replica of the bust in intricate detail with the obverse featuring a fine effigy of Her Majesty Queen Elizabeth II by Ian Rank-Broadley FRBS, the Queen’s portrait has been specially adapted to fit into this unique shape. The year of issue “2012” is just below the portrait and the coin’s face value of $10 is on the obverse towards the lower half.

The coin is presented in a beautiful triangular box. With a weight of 31.1 grams of pure silver, the dimensions of the coin are 61 X 32 mm. and a total mintage of just 2000 pieces for world-wide distribution.

For more information on this and other coins produced by the Pobjoy Mint, please visit their website at: http://www.pobjoy.com/ukworld/page.php?xPage=index.html International orders fulfilled.