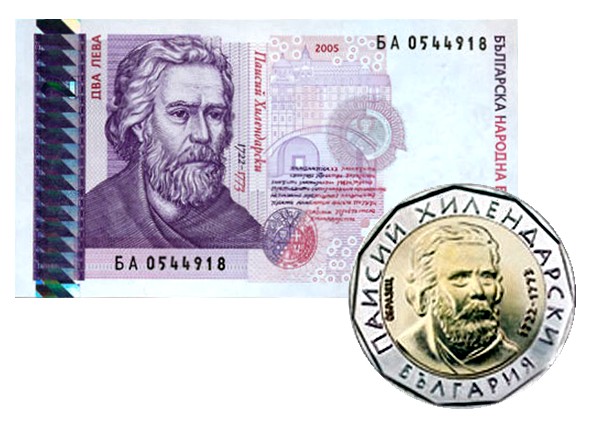 The Bulgarian National Bank has announced that beginning December 7, 2015 its current two-leva banknote will be replaced with a circulation coin of the same denomination.

The new 9 gram coin will be bi-metallic, with a central disc of cupro-nickel-zinc alloy, and an outer ring of white cupro-nickel alloy. Measuring 26.5 mm in diameter, it will be slightly larger than the current one-leva bi-metallic coin, which has been in circulation since 2002.

The present two-leva banknote—which equals $1.13 USD—was introduced in 1999 and re-issued in 2005. It depicts Pagisios of Chiliandar (1722 – 1773), known for encouraging the Bulgarian National Revival and serving in Holy Orders at the monastery of Chiliandar on Mount Athos. Pagisios also authored the “Historiae Sclavo-Bulgaricus,” the first work of modern Bulgarian letters and a catalyst toward Bulgarians’ spiritual emancipation and national reawakening.

The reverse depicts a facsimile of the draft of the “Historiae Sclavo-Bulgaricus,” with a list of Bulgarian rulers. The lower half includes Bulgaria’s Coat of Arms with three lions couchant, as published in the Gruenberg Heraldic Compendium of 1483. Both the two-leva note and coin will circulate until the National Bank announces the note’s withdrawal. The new coin will also depict this national hero on the obverse, with the numeral 2 being flanked by linear markings on the reverse.

The coin will be officially launched on November 26, after which a public awareness campaign will begin. After November, the smallest note in circulation will be the 5-leva note; the largest note will be the 100-leva denomination. For more information on the new coin, or on the current series of banknotes and coins in circulation, please visit the Web site of the Bulgarian National Bank. Information is offered in Bulgarian and English.