The Bulgarian National Bank has released the latest coin from the series “Bulgarian Churches and Monasteries” featuring the Troyan Monastery. Founded no later than the end of the 16th century, it is the third largest monastery in Bulgaria and located in the northern part of the country in the Balkan Mountains. During the 18th and 19th centuries, the monastery was a great center of learning and letters with junior and secondary schools later joined by a monastic academy. The monastery also played a role in the national liberation movement with a secretary revolutionary committee established by Vasil Levski at the location in 1870.

The obverse of the coin features the icon of Virgin Mary with Three Hands kept at the Troyan Monastery. Towards the right side of the coin are inscriptions with the nominal value of 10 ЛЕВА’ (10 levs), the Bulgarian National Bank logo with the year ‘1879’ on the strip, and the year of issue ‘2014’. The inscription ‘БЪЛГАРСКА НАРОДНА БАНКА’ (Bulgarian National Bank) appears in a semicircle.

The reverse contains a view of the monastery complex with inscriptions ‘ТРОЯНСКИ МАНАСТИР’ and ‘УСПЕНИЕ БОГОРОДИЧНО’ (Troyan Monastery and the Assumption of Virgin Mary) in semicircles. 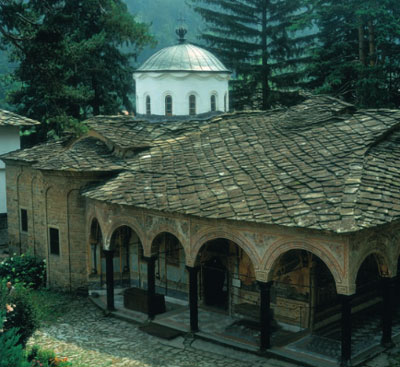 The author of the artistic design is Stefan Ivanov.

Each coin is struck in 92.5% silver to proof quality. The weight of each piece is 23.33 grams and the diameter is 38.61 mm. The mintage is 3,000. Coins are available from Bulgarian National Bank cash desks for BGN 66 including VAT.