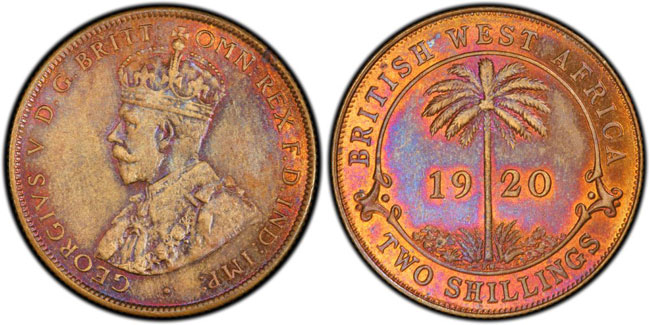 The coinage that was collectively issued under British West Africa started in 1907 and circulated in a number of different British colonies, protectorates, and mandates located in Western Africa. Before this coinage was struck, the British Pound circulated in the region. Over time, the coins and currency in circulation tended to be returned to Great Britain, which led to a chronic shortage of circulating coinage in the British possessions.

To solve this, it was decided that a local coinage was to be issued, meant for circulation in the Gold Coast (modern-day Ghana), Sierra Leone, Gambia, and areas that today make up Nigeria. While the countries were not physically attached to each other (Gambia is approximately 1,600 miles east of Nigeria, and a number of different countries are located between them), it was decided that there would be a common coinage for the British possessions in the region.

All coins struck for British West Africa have a relatively basic design. With a few earlier exceptions — more on those later — the lower denominations (1/10-, ½-, and 1-penny) are all struck in copper-nickel. A central hole is surrounded on the obverse by the denomination, a crown, two ornaments, and both Latin and Arabic text. An inscription refers to the ruler in Britain at the time — George V, George VI, or Elizabeth II.

The design is similar to that used for British East Africa. The reverse features a hexagram similar to the Jewish Star of David, although here it appears to be simply a design element. BRITISH WEST AFRICA and the date are also found on the reverse.

The first coinage was struck more exclusively for the various parts of Nigeria, and the reverse inscription reads NIGERIA, BRITISH WEST AFRICA instead. With this heading the first issues were 1/10 pennies, struck in 1907 and 1908. Unlike later issues, these were struck in aluminum, and are generally regarded as the first circulating aluminum coinage struck. The coins, however, were very susceptible to tarnishing and in the latter half of 1908 were replaced by coins of the same design struck in copper-nickel. The aluminum pieces are now very scarce, especially in Gem Uncirculated condition with lustrous, toning-free surfaces. They are still relatively affordable, cataloging at $35 (1907) and $25 (1908) in BU condition.

While many of these lower-denomination issues are easily found in both circulated and Uncirculated condition, there are a number of other dates that are more difficult to locate. The scarcest 1/10-penny is the 1916-H (struck at the Heaton Mint), which had a mintage of 480,000 coins, much lower than the millions struck for most other dates. Low mintage or scarce ½-pennies include 1913 (considered unknown in true Uncirculated condition) and 1931 (mintage 96,000 coins). The scarcest penny is by far the 1914-H, which had a mintage of 72,000 coins. Numerous other dates among these lower denominations are very difficult to find in higher grades.

The next two denominations are the 3-pence and the 6-pence, both sharing a common design. On the obverse is a bust of King George V or George VI, surrounded by the official title as it appears on coins throughout the British Commonwealth. The reverse features the denomination within a wreath, surrounded again by BRITISH WEST AFRICA. There is also a single issue with the effigy of Queen Elizabeth II, struck in 1957 at the Heaton Mint (mintage 800,000 coins). It is the only British West Africa piece struck with the Queen’s portrait, shortly before several of the African countries gained independence. It is also considered one of the scarcest three-pence pieces struck for the region.

Initially both denominations were struck in sterling silver (.925 fine), but this soon changed due to rising metal costs. The 1920-H 3-pence and 6-pence were struck with a .500 silver content, but the 1920-KN and later issues of George V for both denominations were struck in a tin-brass composition. The George VI issues were struck in nickel-brass. Both compositions have a yellow-golden color. In 1952, a 6-pence issue was struck without reference to India (mintage 2,544,000 coins), but was never officially released, although a number of pieces survived. These tend to grade quite high since they never circulated; they are also scarce, and many examples come spotted.

The two largest denominations are the shilling and two-shillings, both of which share a common design as well. Again the coins share the same design. Like the 3-pence and the 6-pence, a bust of George V or George VI is found on the obverse. The reverse features a palm tree in the center, flanked by the date, and surrounded by an ornamental design. The metal composition is similar to that of the 3-pence and 6-pence as well, although no .500 fine shilling was struck in 1920 (a two-shilling piece was struck in that composition). The shilling and two-shillings struck under George VI again were struck in nickel-brass.

The British West Africa piece struck for circulation with the lowest mintage is the 1920-G shilling, the only British West Africa coin struck by the private mint of Gaunt & Sons in Birmingham. The tin-brass issue had a mintage of just 16,000 coins, and is very difficult to find in any grade, with Uncirculated examples being of the utmost rarity. Another rarity is the 1928 two-shillings, despite its mintage of 7,900,000 pieces. Most of these, however, were melted in 1929 and only a few examples escaped into circulation. Considered the rarest British West Africa coin, a superb Uncirculated example sold for over $17,000 in 2014.

The coins of British West Africa make a very interesting series, many of which remain affordable, despite the fact that they are quite difficult to find in higher grades. Prices have been rising, and it seems that the future is bright for these compelling coins. Here we have focused on the circulation strikes, but many dates also exist in specimen or Proof format. These are very collectible in their own right and many can be traced back to the Heaton and King’s Norton Mint archives that were sold in recent years.