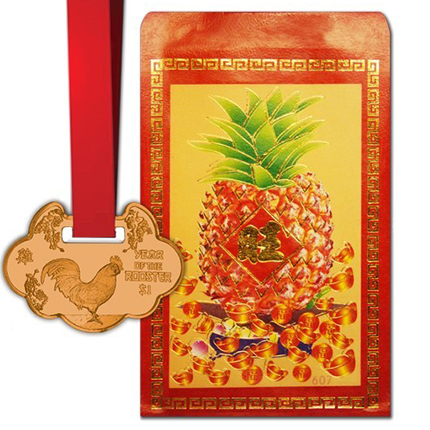 On October 5, the Government and Treasury of the British Virgin Islands launched two new 2017-dated coins that mark the start of the Lunar New Year. Celebrated since 2600 BC in much of Asia and based on the cycles of the moon, the New Year will arrive on January 28, according to the Western calendar, and will be represented by the Rooster in the Eastern zodiac. (Scroll down for more about the Year of the Rooster.)

The original and unusual shape of the coin is based on the shape of an oriental “lock charm,” a traditional device used to safeguard possessions and property, protect a person from evil, and bring good luck, fortune, official rank, and long life. These lock charms are usually presented to family and loved ones and placed under pillows at the time of the Lunar New Year. The coins, struck in both bronze and .999 silver, are produced by the Pobjoy Mint, U.K., on behalf of the Treasury of the British Virgin Islands. The reverse depicts a cockerel (for the year of the Rooster) and cherry blossoms (representing the “five blessings” that protect the owner from evil and ensure good luck and long life). 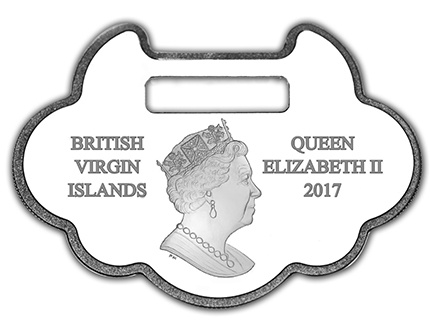 The obverse of each coin features the new effigy design of Her Majesty Queen Elizabeth II and used exclusively by Pobjoy Mint.

The coins are available from November 1 in bronze (Uncirculated) and .999 fine silver (Proof). The silver lock coin is highlighted with a stunning color application on the cherry blossoms. The bronze version is dispatched in a “lycee,” or money gift pack; these are traditionally given as gifts during the Lunar New Year. Each silver coin is encapsulated in an acrylic capsule for protection and housed in a stunning red box. Both the silver and gold versions are accompanied by an 80 cm (31″) red ribbon that can be threaded through the coin.

For more information on this and other coins issued by the Treasury of the British Virgin Islands, please visit the website of the Pobjoy Mint. International orders dispatched where applicable.

The Year of the Rooster

The Lunar New Year can fall anywhere between late January and the middle of February and the cycle runs to 12 years. Similar to the zodiac associated with the western calendar, the signs in the Lunar calendar are represented by animals or mythical creatures according to specific years, with each having distinctive traits or gifts. Depending on position of the year you were born in, relative to the 12-year cycle, you are said to possess those distinct traits or gifts.

Next year, 2017, is represented by the cockerel or rooster, which is 10th in the Lunar zodiac. Persons born under this sign are considered to be very observant, hardworking, resourceful, courageous, and talented, much as roosters are regarded to be very confident about themselves. In the animal kingdom, roosters are always active and perhaps somewhat amusing; persons born under its year are said to be popular “among the crowd.” If you are born during the year of the Rooster, you may also be described as a talkative, outspoken, frank, open, honest, and loyal individual. You may also display traits such as liking to be the center of attention and appearing attractive and especially well groomed.

Of course, we all know the rooster for its natural instinct to be an alarm clock, duly waking people up in the morning. Since ancient times, roosters have been thought to have the ability to divine the future, and in Greek mythology, this ability led to its being regarded as the god’s ambassador. People born in the year of the rooster are likewise thought to have the ability to discern what is coming.