The Treasury of the British Virgin Islands have launched (19th December) a new crown for 2014 whose focus is on the marine life of this British Caribbean territory. One of the more curious sea life animals to be featured is the Seahorse.

The Seahorse is the reference name given to 54 species of marine fish in the genus Hippocampus which comes from the Ancient Greek hippos meaning ‘horse’ and kampos meaning ‘sea monster’. Seahorses are found in shallow tropical and mild waters throughout the world.  Seahorses prefer to live in sheltered areas such as seagrass beds, estuaries and coral reefs.  Seahorses range in size from 1.5cm (Just over half an inch) to 35.5cm (almost 14 inches) in height and are named for their equine appearance.  Although they are bony fish they do not have scales as other fish do. Instead they have a thin skin which is stretched over a series of bony plates which are arranged in rings throughout their body. Each species has a distinct number of rings. Seahorses swim upright and, unusual amongst fish, seahorses have a flexible, well-defined neck. They also have a coronet on the head which is distinct for each individual. The Seahorse feeds on small crustaceans which float in the water or crawl on the bottom of the sea bed.  With their excellent camouflage and a lot of patience, they can ambush prey that float within striking range. 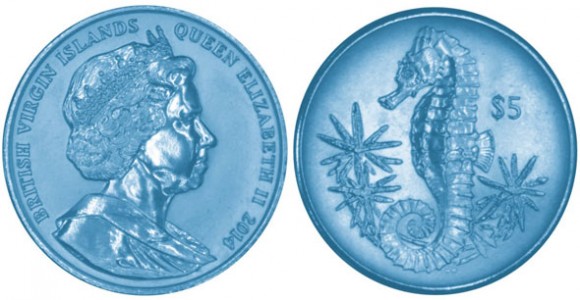 Struck by the Pobjoy Mint, UK, on behalf of the British Virgin Islands, the design on the reverse side features a beautiful seahorse with its tail entwined around some coral. The obverse of the coin features a head and shoulders effigy of Her Majesty Queen Elizabeth II by Ian Rank-Broadley FRBS.

The coin has been produced in Turquoise Titanium and is also available in Cupro Nickel and Proof Sterling Silver. Titanium is exceptionally difficult to strike and each coin is truly unique. As there is a distinct lined effect present on the coins – also unique to Titanium metal, no Titanium coin is exactly the same as another.

For more information on this and other coins issued by the British Virgin Islands, please visit the website of the Pobjoy Mint at:  www.pobjoy.com Information offered in English, international orders dispatched.