The Treasury of the British Virgin Islands have launched (23rd July) two new coins which celebrate the arrival of the first child of William, Duke of Cambridge, and Catherine, Duchess of Cambridge – son and daughter in law of the Prince of Wales. The new arrival was born one day before in London and is the first grandchild of Prince Charles and the third great-grandchild of the Queen.

As soon as was practical after the Prince of Cambridge was born, a proclamation signed by the doctors who delivered the Royal Baby was rushed from the ward, once close family had been informed of the new arrival, and displayed on an historic easel at the gates of Buckingham Palace, the same way the Duke of Cambridge’s birth was announced in 1982. The announcement read, “Her Royal Highness was safely delivered of a son at 4:24 pm today. Her royal Highness and her child are both doing well.”The baby boy will be third in line to the throne of the United Kingdom after his grandfather and father.  This is the first time since Queen Victoria’s era that there have been three living male heirs. 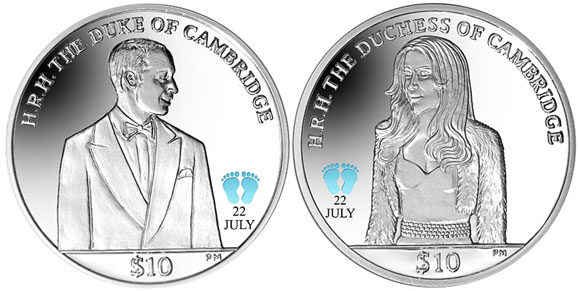 The two coins, struck by the Pobjoy Mint, were first released in 2012, one coin depicts the Duchess of Cambridge and the other the Duke of Cambridge, both shown in their evening attire following their Wedding in 2011.  A Privy Mark has been cleverly and artfully added to each coin showing baby footprints and the new Royal arrival’s date of birth. The footprints are colored blue to represent the birth of a son. The obverse of each coin features an effigy of Her Majesty Queen Eilizabeth II by Ian Rank-Broadley FRBS.

Available in Cupro Nickel (BU) and Proof Sterling Silver. Please visit this page to view these coins as well as the most recent product releases from the Treasury of the British Virgin Islands. Information offered in English, international orders fulfilled.