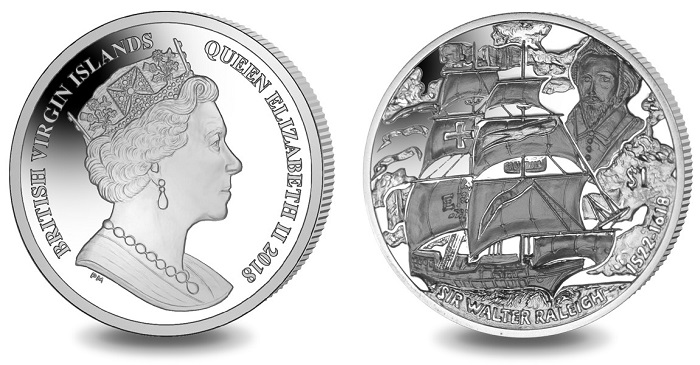 The government and treasury of the British Virgin Islands have issued (8th August) new collector crown coins which mark the 400th anniversary of the death of Sir Walter Raleigh (1554–1618) — a writer, poet, courtier, and explorer who is considered by many as the pivotal force which encouraged the settlement of North America by the English, after being granted a royal patent to explore the New World. Raliegh explored the soon-to-be colony of Virginia, which paved the way for future English settlements all along what became the Eastern Seaboard of North America.

Sir Walter Raleigh was an English gentleman born in the county of Devon as the son of Walter Raleigh senior and Catherine Champernowne into a Protestant family. Although little is known of his early life, it is known that he spent some time as a soldier in Ireland and took part in the suppression of rebellions, participating in the Siege of Smerwick in 1580.

Within a short period, Raleigh would become one of the most notable figures of the Elizabethan era, fighting in the service of Queen Elizabeth I between 1579 and 1583. Described as tall, handsome, and self-confident, Raleigh eventually used these physical attributes to his best ability and rapidly rose within court circles, catching the eye of the Queen herself, and upon his return from Ireland, he quickly became a favourite. Raleigh was rewarded with a large estate in Ireland, trade privileges, as well as a knighthood — but more importantly — in 1586 he was appointed as a captain of the Queen’s Guard, his highest office at court. Though the explorer in Sir Walter was never quashed, after hearing of the legend of El Dorado, the famous City of Gold which was believed to be somewhere in the New World, Raleigh went on two voyages in search of the legend which led him to the northern coast of South America (present-day Guyana and the Caribbean Sea). Despite his never finding the fabled city, Sir Walter was credited with bringing back with him to England two extraordinary finds: Potatoes and tobacco — previously unknown in Europe at the time.

Although he was a favourite of the unmarried Queen, there was never a question of Sir Walter ever being regarded as a suitable husband to England’s “Gloriana” — the veritable and all-powerful sovereign who had turned down many chances to marry in her younger days. The young and handsome explorer was 21 years his Queen’s junior and had wished for a suitable wife of his own. In 1591, he secretly married Elizabeth Throckmorton, one of the Queen’s ladies-in-waiting, and did so without the Queen’s permission — for which he and his wife were sent to the Tower of London as punishment. After their separate releases, the couple retired to his estate at Sherborne Dorset, their relationship having never recovered from what Elizabeth I had regarded as an insult. Throughout their marriage, the couple remained devoted to each other and became the parents to two sons, their second son being named after his father.

From 1600 to 1603, Sir Walter was appointed the governor of the Channel Island of Jersey, and it was during this time that Raleigh modernised its defences. Sir Walter’s fortunes took a turn for the worse after Queen Elizabeth died in 1603 and Raleigh was again imprisoned in the Tower, this time for being involved in the Main Plot against King James I, successor to Elizabeth I, who was not favourably disposed towards him.

Raleigh spent 13 years in prison for what may have been his part in the conspiracy in 1603 to replace James VI of Scotland, now King James I of England, on the English throne with his young cousin Arabella Stuart (1575–1615). He was released in 1616 to lead a second expedition in search of El Dorado, and it was during the expedition that men led by his top commander ransacked a Spanish outpost — in violation of both the terms of his pardon and the 1604 peace treaty with Spain. Sadly for the Raleigh family, Sir Walter’s younger son accompanied his father on the second expedition to South America and was fatally shot in the initial attack on the settlement. In the last instance of bad fortune, upon his return to England, and as a measure to appease the Spanish and the Spanish ambassador who insisted that King James I reinstate the death sentence on Sir Walter, he was duly arrested. Raleigh was beheaded in the Old Palace Yard at the Palace of Westminster on the 29th October 1618. According to biographers, Raleigh’s last words as he lay ready for the axe to fall were “Strike, man, strike!” 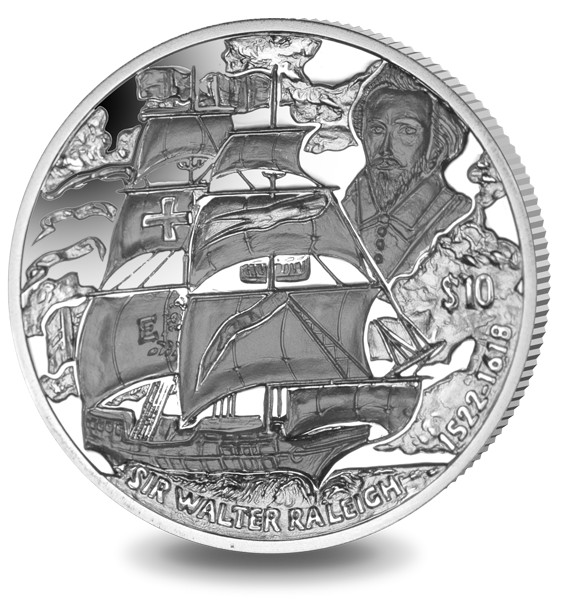 The coins are produced by the Pobjoy Mint at their facilities in Surrey on behalf of the treasury of the British Virgin Islands. The reverse of the coins, which are minted in both cupro-nickel and sterling silver, features a depiction of the Ark Royal, the ship that was constructed for Sir Walter, along with a portrait of the explorer himself. The denomination of $1 (cupro-nickel) or $10 (silver) is seen just to the right of the primary design. The obverse includes an effigy of HM Queen Elizabeth II, which is an exclusive design of the Pobjoy Mint. The year 2018 and issuing authority are placed within the legend around the Queen’s portrait. 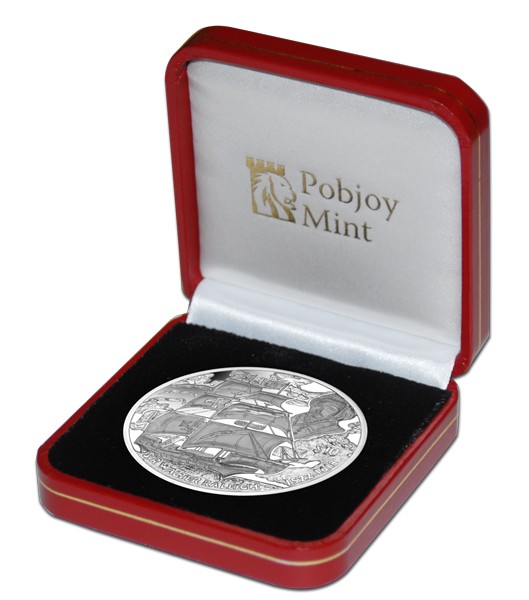 The sterling silver coin is protected by an acrylic capsule and is presented in a custom-branded black box along with a certificate of authenticity. The cupro-nickel coin is shipped in a cloth pouch branded carrier. For additional information about this coin and others issued by the treasury of the British Virgin Islands, please visit the website of the Pobjoy Mint.