The Treasury of the British Virgin Islands have launched (17th September) three coins which remember the 50th year of the untimely death of America’s 35th President, John F Kennedy. Inaugurated on the 20th January 1961, John Fitzgerald Kennedy was the youngest man ever to be elected President of the United States, previously a congressman from the 11th district of Massachusetts from 1947 to 1953, he was then elected to the Senate and served in this capacity until his election to the presidency in 1960. Together, with his glamorous wife Jacqueline Bouvier whom he married in the same year he was elected to the senate, and their two young children Caroline and John Jr., they were America’s ideal First couple and had captured the imagination not only of young America, but of the world.

As well as being America’s youngest man elected to the highest office in the land, he was the first Irish-Catholic President, and in June 1963, he traveled to his ancestral homeland of Ireland, a homecoming he later described as one of the most moving experiences of his life. All eight of Kennedy’s great-grandparents migrated to Boston, Massachusetts during the devastating Potato Famine of the late 1840s, hoping to take advantage of the opportunities being offered in America.  On 28th June, the President was invited to address a joint session of the Seanad (the Upper House of the Irish Parliament) and the Dail (the Lower House of the Irish Parliament).  His speech was full of references to Irishmen who fought in the American War of Independence and he championed the important place for small nations in the pursuit of world peace.  2013 is also the 50th Anniversary of this visit which was observed in Ireland earlier this year with a visit by his daughter Caroline and his youngest sister Jean Kennedy Smith.

President Kennedy’s life was unexpectedly cut short on the 22nd November 1963 when assassin Lee Harvey Oswald, a former US marine had shot at the President while he was traveling in a motorcade in Dallas Texas in order to appear at an election rally. The President’s death was announced to a stunned world and the country began to mourn its young and dynamic leader who had been taken all too soon. The president had been the American head of state for just 1036 days in total but had made such an extraordinary impact not only on the US but internationally. He will be eternally remembered for his stirring speech in Berlin and the phrase “Ich bin ein Berliner” to the inspiring question he posed to all the world on the day of his inauguration “Ask not what your country can do for you – ask what you can do for your country” which resonates in the ears of many to this day.

The coins, struck by the Pobjoy Mint, UK are reminiscent of the ever-popular and much loved American half dollar which was issued in 1964 as both a tribute and memorial to the slain president. 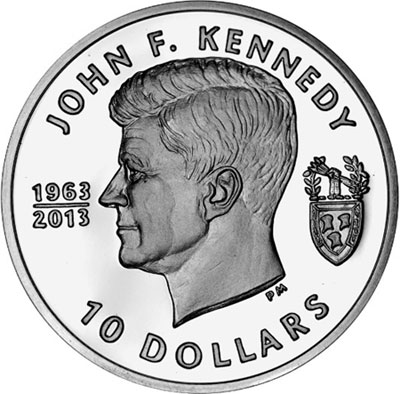 The reverse carries a portrait of John F Kennedy and also a Coat of Arms. This Coat of Arms was presented to the President at the White House on St Patrick’s Day in 1961 by T J Kiernan, the then Ambassador of the Republic of Ireland on behalf of the Irish Government. This was an unprecedented event as never before had a foreign sovereign nation made such a grant to an American President. The obverse of the coin shows an effigy of Her Majesty Queen Elizabeth II by Ian Rank-Broadley FRBS.

Available in BU Cupro-Nickel, Proof Sterling Silver and 1/2gm Fine Gold, the coins are struck to the highest quality with the precious metal versions being produced with a stunning ‘proof’ finish.

For more information on this and other coins issued by the Treasury of the British Virgin Islands, please visit the website of the Pobjoy Mint at: http://www.pobjoy.com/ukworld/section.php/1011/1 Information offered in English – international orders fulfilled.