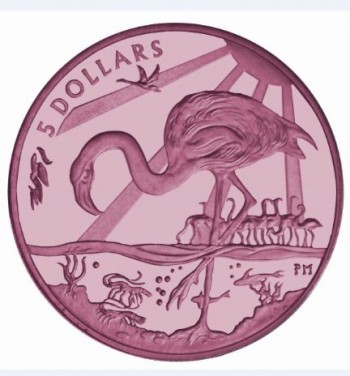 The Treasury of the British Virgin Islands has launched a new series of coins featuring one of the Caribbean’s most recognizable and vibrant birds, the flamingo.

Admired for their color and grace, the flamingo is renowned for their pink feathers, sizable flocks, and a penchant for standing on one leg. An interesting fact about these majestic tropical birds is that their coral pink color does not occur naturally, but rather due to their prolific consumption of brine shrimp and blue-green algae, which contain pigments called carotenoids.

When a flamingo spots a potential meal while wading through shallow water, it plunges its head into the water, twists it upside down, and scoops the fish using its upper beak like a shovel.

Why do Flamingos often stand on one leg, with the other leg tucked beneath the body?  The reason for this is not fully understood, but research indicates that standing on one leg may allow the birds to conserve more body heat, since they spend a significant amount of time wading in cold water. Flamingos are very social birds that live in colonies whose populations can number in the thousands. These large colonies are believed to make it easier for them to avoid predators, maximize food intake, and use scarce nesting sites more efficiently.

The coin is produced by the Pobjoy Mint, UK, on behalf of the British Virgin Islands Treasury. The design on the reverse side features a resplendent flamingo wading in shallow water before a flock of flamingos, along with the coin’s denomination of one, five, or ten dollars. The obverse of the coin features the effigy of Queen Elizabeth II created by Ian Rank-Broadley, with the year of issue is included in the legend.

The coins will be produced in pink titanium, cupro-nickel, and Proof sterling silver, respectively. The Pobjoy Mint promotes their Titanium coins as being unique. They are exceptionally difficult to strike and, because colored Titanium reacts unpredictably during striking, no Titanium coin is exactly the same.  There is a lined effect that is present on the coins that is also unique to Titanium metal.

Pobjoy Mint’s coloured Titanium coins have proved to be a great success with collectors, creating a new category of specialty coins on the market. For more information on these and other coins issued by the Treasury of the British Virgin Islands, please visit the Web site of the Pobjoy Mint. Information offered is in English, with international orders dispatched where applicable.