The Government of the British Virgin Islands have launched (14th February) a coin which celebrates Man’s driving emotion, his inspiration and motive for life, work, heart-break, and of course affection… that of love!

It is fitting that this coin be launched on Valentine’s Day, as this celebration is one of the most well-known traditional days when loved ones exchange cards, known as valentines, and sometimes gifts, but few people are aware that its origins date back to the ancient Roman Festival devoted to Juno Februa who was the mother of Mars and the wife of Jupiter. Juno Februa was the goddess of love and marriage and it is believed her Festival took place around 14th February. This festival celebrated purification, health, the return of the light and the return of the fertile or planting season soon to be harvested.

The Roman Church decided to embrace what it obviously considered a pagan festival and to translate it into something which was more appropriate to the Christian belief. St Valentine was said to be either a priest or bishop martyred in Rome for trying to convert the second Emperor Claudius to Christianity. Valentine’s Day is first mentioned in Chaucer and has been adopted throughout the Western World as an indicator of love. 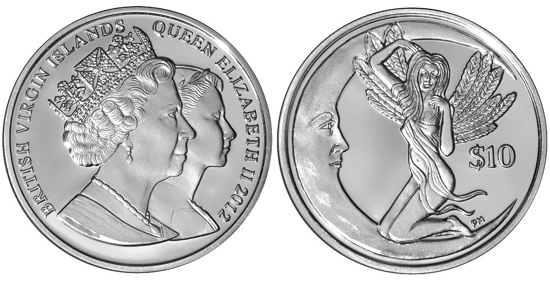 The coin, with a face value of ten dollars, is struck by the Pobjoy Mint in the United Kingdom and features Juno Februa herself on the reverse who was the Goddess of fertility and patroness of Passion with the Moon of Ice (the name in Gaelic for the February moon). The obverse of each coin features a unique Double Effigy showing a portrait of Her Majesty Queen Elizabeth II as she appears on current coins, along with a portrait of The Queen based on how she appeared on the first coins of her reign which has been produced to celebrate Her Majesty’s Diamond Jubilee Year. The text “BRITISH VIRGIN ISLANDS”  and “ELIZABETH II 2012” also appears around the double portrait.

The coin is available in Cupro Nickel as an UNC strike, a Proof Sterling Silver Crown with a weight of 28 grams and also as a 12gm Fine Silver piece with the diameter of a Crown coin, 38.6 mm.

For more information on this and other coins offered by the British Virgin Islands, please visit the website of the Pobjoy Mint at: http://www.pobjoy.com/ukworld/page.php?xPage=index.html