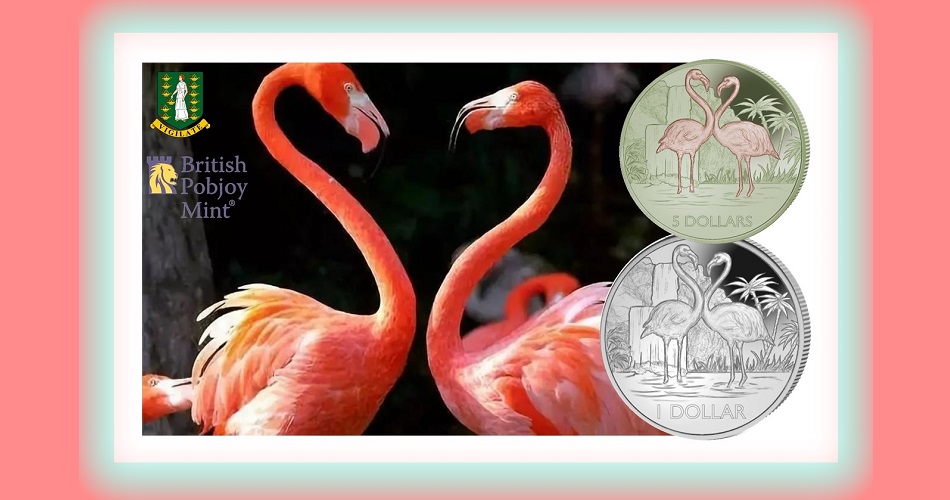 The treasury of the British Virgin Islands has released new dual colour titanium coins featuring one of the most popular and prevalent birds seen in the Caribbean: The pink flamingo. Found worldwide from the Caribbean and South America to Africa, the Middle East, and Europe, they are also popular features in many zoos, aviaries, aquariums, marine parks, and botanical gardens well outside their native ranges. Flamingos are powerful flying birds. Many flamingos migrate or regularly fly between the best food sources and nesting grounds. The occasional flamingo will escape a zoo and make headlines, with bird-watchers sharing their find on the local news.

The name “flamingo” comes from the Spanish and Latin word “flamenco,” which means “fire,” and most likely refers to the bright colour of the birds’ feathers. However, not all flamingos are brightly coloured; some of the birds are mostly grey or white. The variation of the brightness of a flamingo’s colouration comes from its diet. The more shrimp they have access to, the more intense orange and pink their feathers will be. Flamingos live in flocks, are very social, and content to feed and wade around in calm waters, but are also strong swimmers. The reason so many think they can’t fly is because they’re rarely seen doing so. 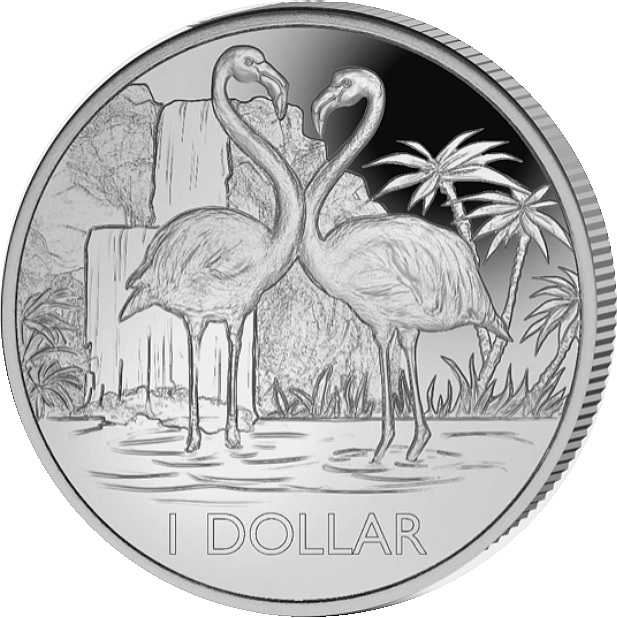 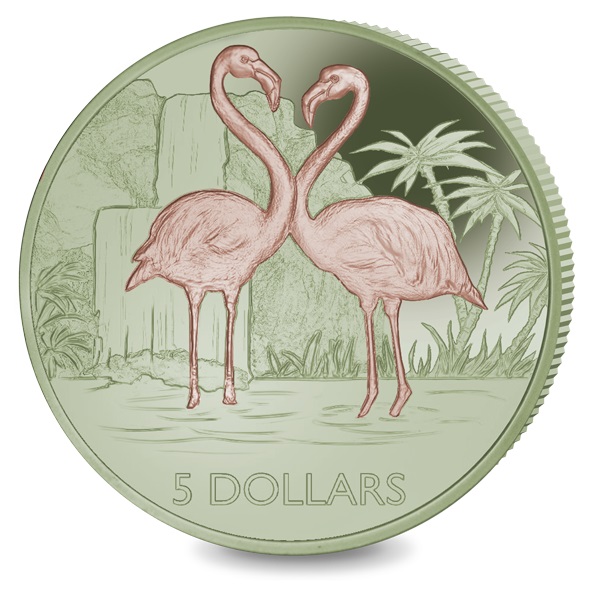 The coins in both titanium and cupro-nickel are produced by the Pobjoy Mint at their facilities in Surrey, England, on behalf of the British Virgin Islands’ treasury. The reverse side of the coins features the American flamingo, also known as the Caribbean flamingo, which is a large species found on the islands. The design shows two adult flamingos standing and facing each other in a pool of water with a background that includes a waterfall and palm trees. The denomination of 5 DOLLARS or 1 DOLLAR is placed below the primary design. 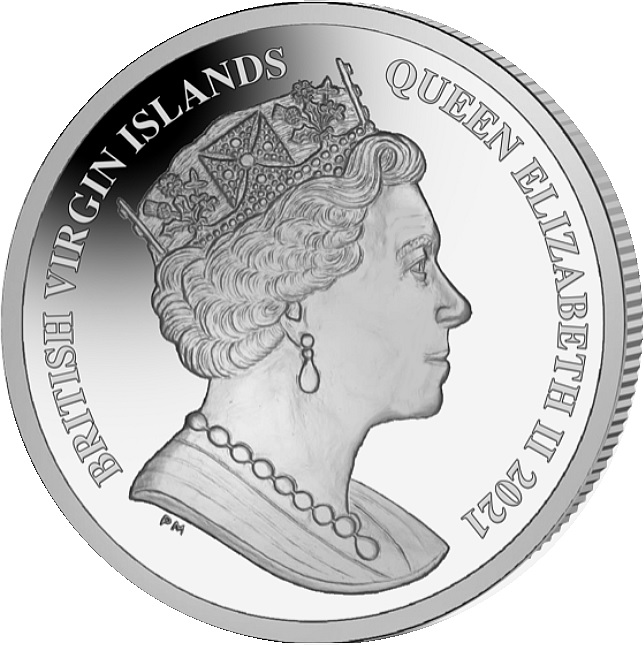 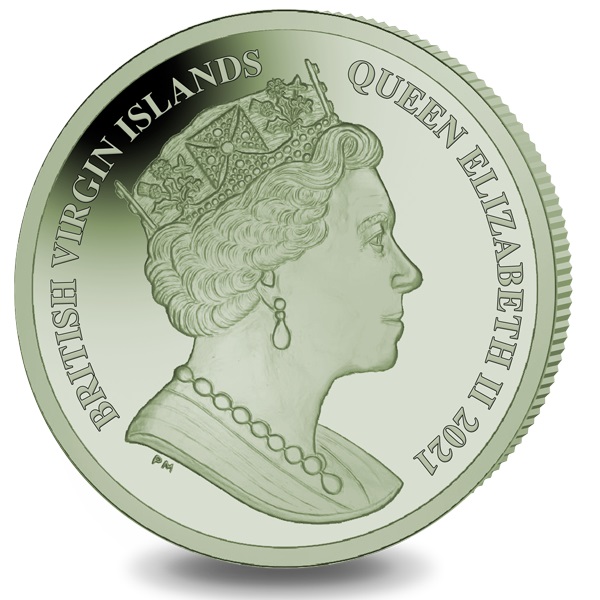 The obverse side includes an effigy of HM Queen Elizabeth II, which is an exclusive design to the Pobjoy Mint. The year of issue, 2021, is included in the legend around the Queen’s likeness. 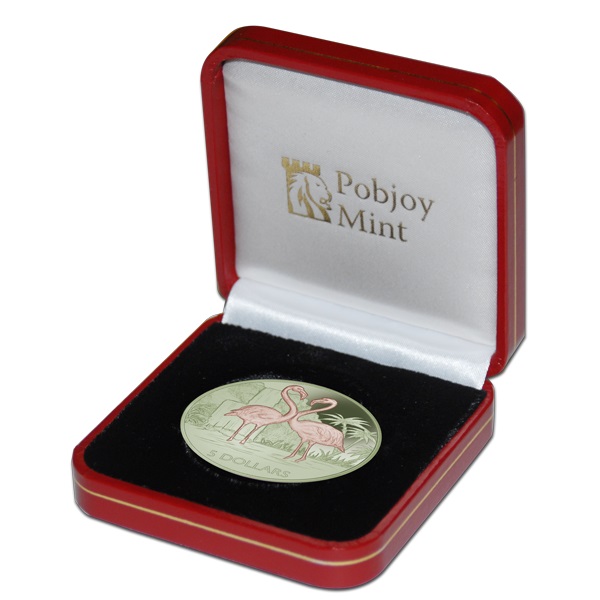 Due to the difficulty of striking titanium coins and the fact that titanium reacts differently with every strike, each flamingo coin coloured in light green and pink is technically different from all others. There is also a lined effect present on the coins, which is unique to this metal. Each titanium coin is encapsulated and presented in a branded custom case, accompanied by a certificate of authenticity. 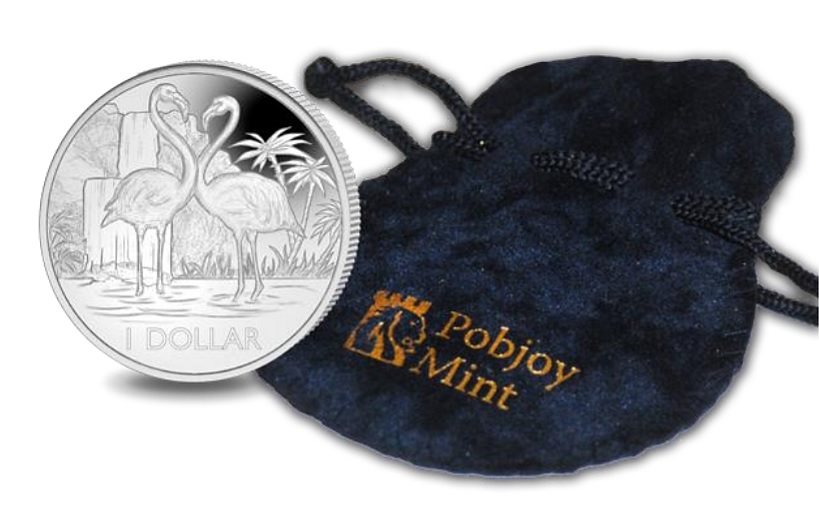 The cupro-nickel pieces are housed in a micro-fibre protective pouch. For additional information about these coins and others issued by the British Virgin Islands’ treasury, please click here.