It is called the most beautiful of all English coins, the coin type of young Queen Victoria that depicts her as Una leading the British lion with her scepter. The motif harks back to a 16th century poem that praised yet another queen. The Künker summer auction now offers one of these rare specimens for a pre-sale estimate of 50,000 euros.

The year was 1590 when the English poet Edmund Spenser published the first part of his fantastic allegorical work on the Faerie Queene. He not only wrote one of the longest poems in the history of English literature but a complex allegory that allowed for several layers of interpretation. The author himself time and again felt compelled to decode the confusing relationships of his epos for the gentle reader. One thing however was clear to see for every recipient: the Faerie Queene was a metaphor for the successful regent of the author’s home country, hence for Elizabeth I, who had brought England, being torn by religious wars at that time, peace and prosperity. 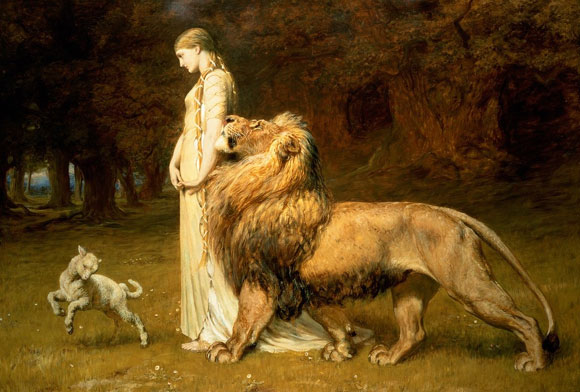 She, told Edmund Spenser, descended in direct line from King Arthur. Her virtues – holiness, temperance, chastity, friendship, justice, courtesy and magnificence – guided the knights on their adventures in the material world. No matter what sorcerers, bad women and evil people might try to tempt them, the true virtues were always of the greatest help when the knights searched for the right way. One of these virtues was Una, personification of truth and the true church. In the first book of the poem, she recruits the Redcross Knight, who represents England as a kind of reincarnation of Saint George, to save her parent’s castle from a dragon. Her noble knight also aides her when she defeats Duessa, personification of the false, i.e. the Catholic Church and synonym for Mary Queen of Scots. As in real life, the story ends with the beheading of Duessa / Mary before the Redcross Knight marries chaste Una.

What, one is inclined to wonder, was the connection between were these half-baked ideas from the 16th century and the England of 1839? In 1769, the steam engine had been invented there, the first completely automatic loom followed in 1785, the puddling for the production of steel in 1784. Since that time, high smokestacks belched out smoke, rivers turned into cloacas and London witnessed with increased frequency that highly toxic amalgam of soot, sulfur dioxide, dust and fog that was going to become part of our vocabulary as smog. Children worked until they were ready to drop. Women were forced to prostitute themselves. Too many people lived on too cramped a space. So, against this backdrop, what was so fascinating about a saga of a bygone era?

Well, escapism is no invention of recent times. The 19th century in particular indulged in the past. The so-called Middle Ages were especially popular (and its fans cared as little about historical accuracy as their modern counterparts nowadays). Artists and of course die cutters took their subjects from that period of time. One of these was William Wyon, who created the dies for Una and the Lion. He was official chief engraver at the Royal Mint from 1828. Today, he is considered one of the most important representatives of Neoclassicism. He designed the enchanting portrait of the juvenile queen that was to grace the coins of the British Empire between 1838 and 1887 and that can be seen on our coin as well. His image of the innocent Una guiding the English lion is a perfect self-portrait of a queen that was energetic, self-confident and surely not naïve. Building on England’s golden age under Elizabeth I, she therewith adopted the role of the virtuous innocence guiding a powerful country, which gladly gives allegiance.

Actually, two years after she had risen to the throne, a little image cultivation was really necessary. It was particularly in the year 1839 when the illusions the British people had had about their pretty monarch somehow faded. In the course of the Flora Hastings affair, who being deathly ill had been accused of and been punished for being illegitimately pregnant, the queen had given a heartless account of herself. Her political shortsightedness was revealed when, due to her stubbornness in the selection of some ladies-in-waiting, she made a government that had been elected by the people resign. The Victoria that, as Una, guided the British lion on the coins with such great a grace was more or less compelled by the opinion of the public to enter matrimony because, so the hope, that might have eased her somewhat unstable temperament.

Consequently, the proud queen married Albrecht of Saxe-Coburg on 10 February 1840. That put an end to the parallel between her and Elizabeth I who had ruled as sole regent during her entire life. The marvelous 5 pound “Una and the Lion” was never repeated. Young Victoria had lost her innocence.