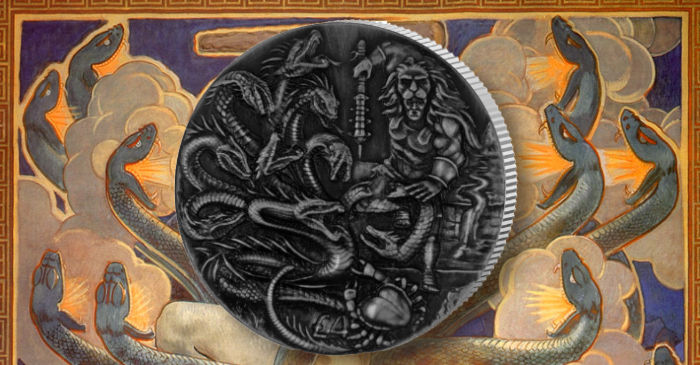 The government and treasury of the British Indian Ocean Territory have issued (7th August) the third coin that is part of their series entitled “Famous Mythical Creatures,” which features some of the world’s most well-known stories. These famous mythological stories, tales, and legends were designed over the generations to entertain, thrill, and inspire the listeners. These ancient myths often taught younger audiences morals such as the virtues of love, courage, strength, and self-reliance — but they also taught the consequences of vices associated with jealousy, greed, deceit, and treachery.

The first two releases of this five-coin series minted as two-ounce fine silver coins illustrating famous myths known the world over have proven to be extremely popular. The third installment in series features the Hydra, which is one of the beasts faced by Hercules in the story of the Twelve Labours. These were feats that Hercules had to complete over 12 years as a penance — feats considered so difficult that they seemed impossible for any mere mortal man to achieve. The second labour of Hercules was to kill the Lernaean Hydra, a monstrous nine-headed serpent in Greek and Roman mythology who terrorised the local countryside, attacking with a potent venom. The challenge of defeating the monster was that it could not easily be killed, as one of the nine heads was immortal. The Hydra also had assistance from a huge crab which would bite Hercules’ foot, causing further distraction. After removing and destroying the eight mortal heads by sealing their necks to prevent replacement heads from growing, Hercules cut off the ninth head and buried it in the ground and covered it with a heavy rock — never to emerge again.

The coins are produced using a process of high relief by the Pobjoy Mint. The image on the reverse shows Hercules fighting the Hydra, with the crab also shown attacking Hercules. Thanks to the high relief, the design is brought to a greater depth, showing how monstrous the Hydra was.

The obverse includes an effigy of HM Queen Elizabeth II, which is an exclusive design of the Pobjoy Mint. The year 2018 and issuing authority are placed within the legend around the Queen’s portrait.

Each two-ounce fine silver coin has been produced in high relief and is finished with an oxidised process, which creates the Antique look and brings the featured characters to life. The encapsulated two-ounce fine silver high relief coins are packaged in a custom-made acrylic box with an outer printed sleeve and include a certificate of authenticity. A further two coins will be released to add to this series and will feature the centaur and Medusa.

For additional information about this coin and others issued by the treasury of the British Indian Ocean Territory, please visit the website of the Pobjoy Mint.