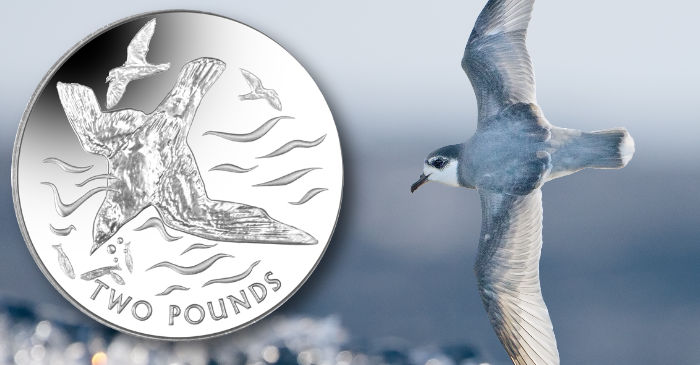 The government and treasury of the British Antarctic Territory have issued (27th February) new titanium coins which feature one of the territory’s most recognisible feathered inhabitants — the blue petrel. They are often spotted in the region from the southern tip of South America to Northern Argentina and, of course, near the northern point of the Antarctic Peninsula — part of the British Antarctic Territory. A curious little creature, the blue petrel (Halobaena caerulea) is a small seabird that reaches about 200 grams (just over seven ounces) in weight and a length of 30 centremetres (just under 12 inches) with a white underside and face with a blueish grey topside. The blue petrel feeds primarily on krill but also eats other crustaceans, fish, and squid. They catch their prey by diving into the water and can reach depths of up to six metres (nearly 20 feet), but can also be found sitting on the surface and dip diving. However, these clever birds also have an extraordinary ability to produce what most would consider a foul-smelling oil which serves a very important purpose since they store this in a special section of their stomach and eat this oil to feed themselves during long flights.

The blue petrel is a pelagic bird, which means that they live at sea, and the only time they visit the shore is when they breed and it is during this time you can find the birds living in burrows in large colonies. The female will lay only one egg, which takes about 50 days to hatch and a further 55 days for the hatchling to fledge.

The coins are produced by the Pobjoy Mint at their facilities in Surrey England on behalf of the treasury of the British Antarctic Territory and include both cupro-nickel and light blue titanium examples. The design on the reverse features a blue petrel at its best, diving into the Antarctic Ocean in order to catch fish. In the surround, you can see another two blue petrels ready to join the feast. The denomination of TWO POUNDS is placed just under the primary design.

The obverse features an effigy of HM Queen Elizabeth II, which is an exclusive design of the Pobjoy Mint. The legend around the Queen’s effigy includes the issuing authority, BRITISH ANTARCTIC TERRITORY, and the year of issue, 2018.

Both the Brilliant Uncirculated cupro-nickel coin and the Uncirculated titanium coins are encapsulated and housed in a custom-branded red presentation box along with a certificate of authenticity. As titanium reacts differently with every strike, each blue petrel tinted coin is technically different from each other and will vary slightly in colour. There is also a lined effect that is present on the coins which is unique to this metal. For additional information on these and other coins issued by the British Antarctic Territory, please visit the website of the Pobjoy Mint.