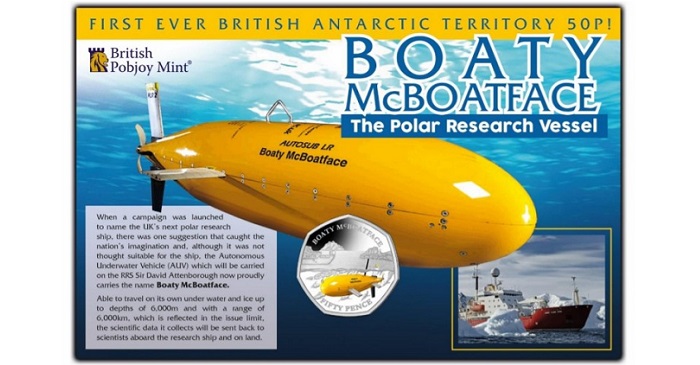 The government and treasury of the British Antarctic Territory have issued (3rd July) their first 50-pence coin whose reverse design features a somewhat quirky, tongue-in-cheek name of one of the newest underwater research vessels of the National Oceanography Centre, which is located in Southampton, U.K.

The somewhat comedic story began in March 2016 when the Natural Environment Research Council launched a campaign to find a name for the UK’s next world-class polar research ship. One “name” in particular by former BBC Radio Jersey presenter James Hand captured the nation’s imagination when his suggestion of “Boaty McBoatface” went viral on social media and was soon trending on Twitter, being discussed all over the world. The autonomous underwater vehicle was initially named with another popular choice, “Sir David Attenborough,” but the popularity of Boaty could not be ignored, and so one of the National Oceanography Centre’s auto-sub long-range autonomous vehicles was renamed and now proudly carries the name. It will serve with the RRS (Royal Research Ship) Sir David Attenborough.

The result of the poll, whose votes crashed the website of the Natural Environment Research Council, had sparked a mixed reaction on social media with many people in support of a comment going something like, “If this boat isn’t named Boaty McBoatface, then democracy has failed.” One individual frowning on the suggested name commented, “Not a name that will inspire confidence in its ability to provide credible research”.

Ultimately, The Natural Environment Research Council posted in a press release that they would have the final say of the name of the 200 million-pound polar research ship, per their competition rules, but popularity won them over. Despite an online apology from the radio host who made the initial humorous suggestion, everyone admitted that the debate had created “legs of its own.” When the Natural Environment Research Council launched the competition, they hoped for “something inspirational” that would exemplify the ship’s work, but that did not prevent people making suggestions which also included “Pingu” (the animated penguin character) and “It’s Bloody Cold Here.”

The top five suggestions were:

Today, Boaty and two other autosub long-range vehicles have been developed at the National Oceanography Centre and are able to travel thousands of kilometres on missions lasting several months at a time. The ability to travel under ice and reach depths of 6,000 metres will enable Boaty and friends to explore 95% of the ocean. 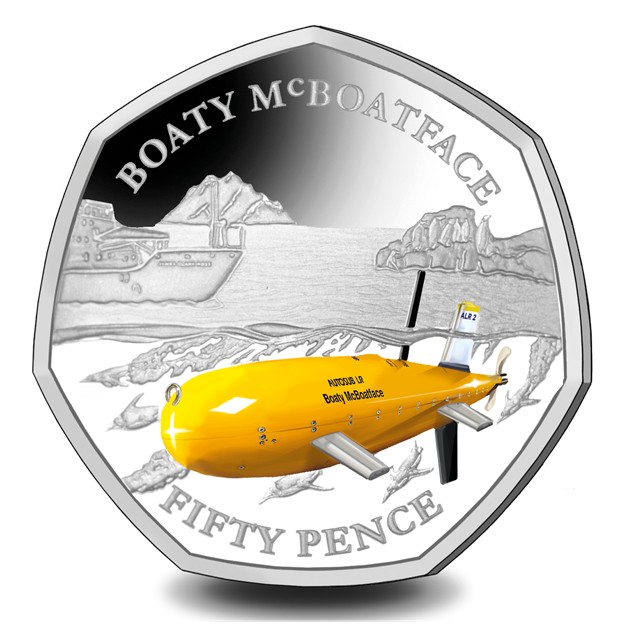 The coins are produced by the Pobjoy Mint at their facilities in Surrey, on behalf of the treasury of the British Antarctic Territory. The design on the coin shows Boaty McBoatface submerged in the Antarctic Ocean with the research ship RRS James Clark Ross shown above sitting among the icebergs which make up the Antarctic. Penguins can be seen swimming around Boaty McBoatface and also on the icebergs above. 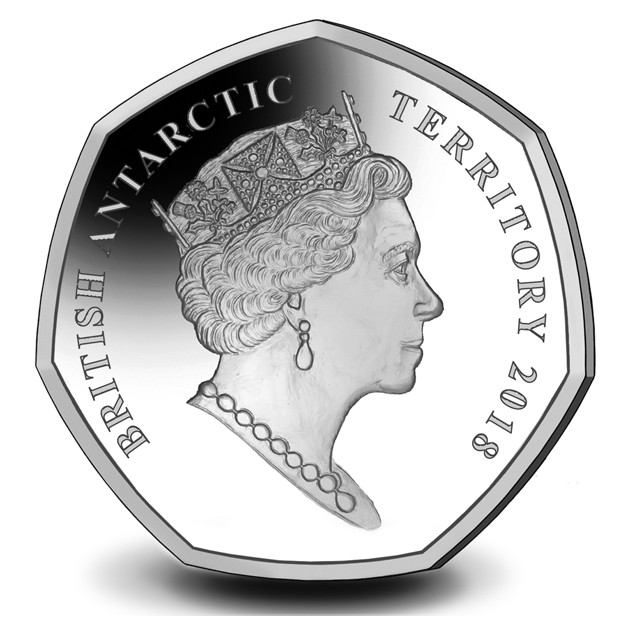 The obverse includes an effigy of HM Queen Elizabeth II, which is an exclusive design to the Pobjoy Mint. The year of issue is included in the legend placed around the Queen’s portrait.

The coin is available in cupro-nickel with Boaty McBoatface being portrayed in colour. The coin will be presented in a stunning, specially designed colour pack. For additional information about the first-issued 50-pence coin of the British Antarctic Territory and others, please visit the website of the Pobjoy Mint.