A bill proposing the issue of 2018-dated commemorative coins promoting breast cancer awareness was signed into law by President Obama on Friday, April 29. This program is perhaps best known for its proposed inclusion of “pink gold” in the composition of its $5 gold issue, which will mark the first time such color has been employed on a coin struck by the United States Mint.

The Breast Cancer Awareness Commemorative Coin Act specifically stipulates that the $5 coin “be made of ‘pink gold’ containing at least 75% gold.” As noted previously, gold commemorative coins usually contain 90% gold, but the hue of pink gold is created by employing a greater percentage of silver and copper. 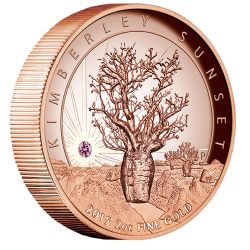 The legislation mandates the release of three separate issues, the mintage limits of which are set at 50,000 $5 gold coins, 400,000 silver dollars, and 750,000 clad half dollars. Each denomination will be available in both Proof and Uncirculated versions.

As with other commemorative coins issued by the U.S. Mint, surcharges will be added to the price of each coin to support appropriate organizations. In this case the charges will go to the Breast Cancer Awareness Foundation in the following amounts: $35 per gold coin, $10 per silver dollar, and $5 per half dollar. The coins have been approved for issue during 2018 only.

The bill was sponsored by U.S. Representative Carolyn Maloney of New York and was first proposed in 2013.

Now that this law has passed, the four commemorative coin programs slated for release during the next two years have all been made official, and the Mint is engaged in various stages of preparation for each project.

The next four U.S. Mint commemorative coin programs are listed below, followed by three possible programs that have been proposed for issue during 2019 and 2020.