The Banco Central do Brazil have announced that a series of gold, silver and cupro-nickel coins will be issued ahead of the FIFA World Cup which the country will be hosting. A total of nine different coins will be issued from the 24th January – comprising of one gold, two silver, and six cupro-nickel coins. The tournament, which is staged every four years, is scheduled to commence on the 12th June and will see 32 national football, or Soccer, teams battle over the next month for the championship. The “Copa do Mundo da FIFA Brasil 2014” will be staged in twelve cities around the country, with the host country kicking off the competition – playing against the national team from Croatia at the venue in Sao Paolo.

The 2014 FIFA World Cup will be the second time that Brazil has hosted this international tournament, the first being in 1950. 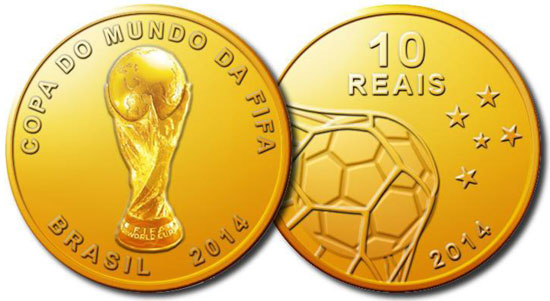 10 Reais: Depiction of the World Cup trophy on the obverse along with the text “COPA DO MUNDO DA FIFA” above the primary motif, the text “BRASIL 2014” positioned below. The reverse includes a soccer ball being bounced off the goal net with a depiction of the Southern Cross constellation positioned just to the right of the primary motif. The denomination of “10 REAIS” is seen above the motif and the year of issue “2014” is positioned along the edge, also towards the lower right. 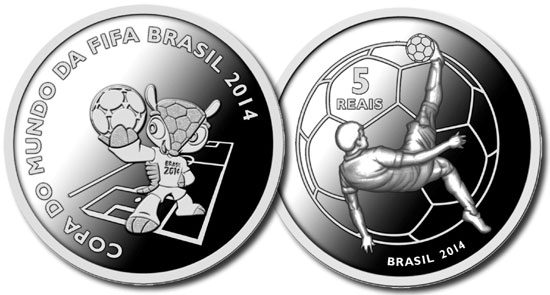 5 Reais: The first coin includes the FIFA Copa Mundial logo – mascot on the obverse along with the text ““COPA DO MUNDO DA FIFA BRASIL 2014” placed along the upper portion of the coin. The reverse depicts a player in motion as he kicks the ball, himself seemingly in mid-air. The coin’s denomination of “5 REAIS” is placed above the primary motif with the text “BRASIL 2014” just under and along the lower right edge. 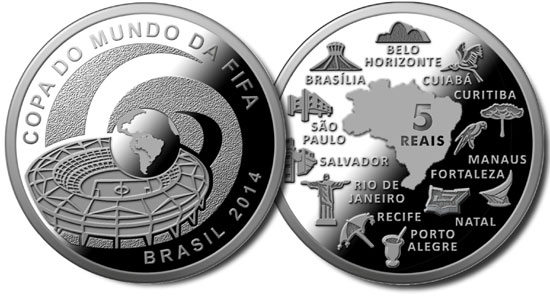 The second coin includes an image of one of the Stadium venues with a globe superimposed over the stadium and positioned in the center. The text “COPA DO MUNDO DA FIFA” is placed along the upper edge of the primary motif with “BRASIL 2014” just underneath and along the edge. The reverse includes a compilation of all the names of the cities of the venues which will host the tournament – they are placed around a map of the country of Brazil itself. The denomination of “5 REAIS” is placed off-center on the country’s map outline.

2 Reais: The series of 2 Reais is entitled “Football moves” and shares a common reverse which includes an outline of the map of Brazil against the design of a football. The coin’s denomination of “2 REAIS” is placed on the map to the upper left half with the text “FIFA WORLD CUP BRASIL” appearing in two lines together with the World cup trophy just to the right of the denomination. The year of issue “2014” is seen to the lower left. 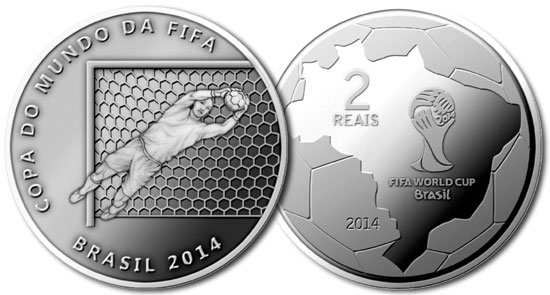 Coin 1: Making a save – Goalie leaping towards the incoming football – the goal net seen behind. 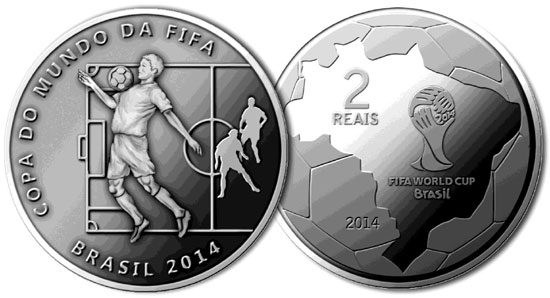 Coin 2: Controlling the ball – Player bouncing the football off his chest, behind, a configuration of the football field & two silhouetted players. 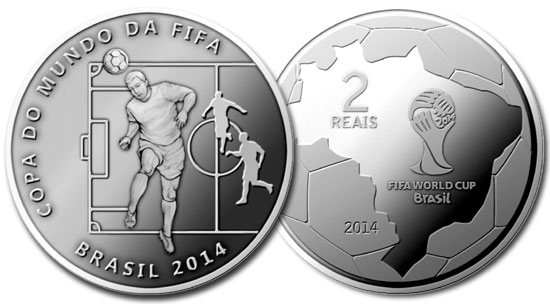 Coin 3: “heading” the ball – Player bouncing the football of his head, behind, a configuration of the football field & two silhouetted players. 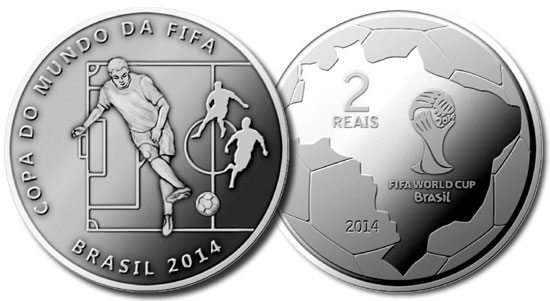 Coin 4: Passing the ball – Player kicking the ball with his right foot, behind, a configuration of the football field & two silhouetted players. 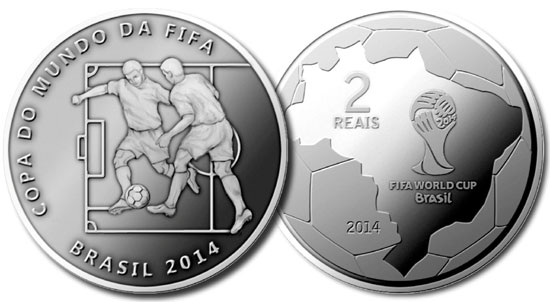 Coin 5: Dribbling – Two players vying for control of the ball. 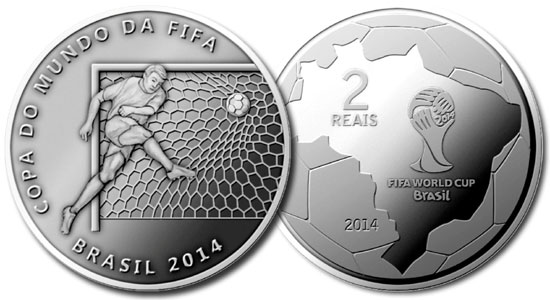 Coin 6: Scoring! – Single player kicks, shoots and scores a goal – the coins viewed in order shows step by step the actions seen at a football game leading to a goal.

The Gold and silver coins may be purchased separately. The 2 Reais coins can also be purchased individually or as a six-coin set. The Banco Central do Brasil have added that the retailing of and, ordering the coins is being handled jointly by the Banco do Brasil, a commercial retail banking institution along with the Central Bank itself. Interested collectors can also purchase the coins over the counter at regional offices of the Central Bank around the country.