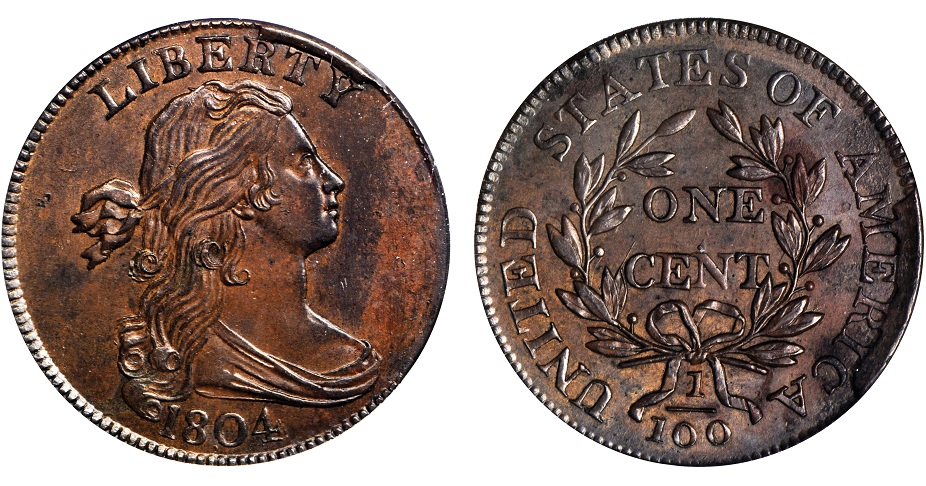 On the obverse the head of Miss Liberty faces to the right, her hair behind, some strands tied with a ribbon at the back with other tresses falling to her shoulder, and her bust is draped with cloth. The letters LIBERTY are above her head and the date at the lower border. On the reverse is a wreath open at the top and tied with a ribbon bow below. At the center in two lines is ONE/CENT, and, around the border is UNITED STATES OF AMERICA. Below the wreath is the fraction 1/100.

The published calendar year mintage of 756,838, without question, was mostly composed of earlier dates. A modern population of about 1,200 1804-dated coins has been suggested, as has a survival rate of two percent. This formula would project an original mintage of about 60,000 for 1804-dated cents.  The Mint used a more durable die steel beginning in the 1800 to 1802 years which dramatically increased the die life. This caused some problems with overestimating the number of dies to be prepared. Accordingly, in 1804 the calendar year coinage was mostly from earlier dies on hand.

In 1859, in his American Numismatical Manual, Dr. Montroville W. Dickerson noted that, in circulation, one 1804-dated cent could be found for every 30 cent pieces of 1805. The author had been acquainted with cents for some time and also wrote of finding 1793 issues in circulation at face value.

Only one die variety is known, BW-1, which exists in three die states: S-266a, from unbroken dies; S-266b, with a break (which begins as a crack) at ERT (of LIBERTY) at the top of the obverse die; and S-266c, with an obverse break and with a reversed break connecting the top of MERIC. As most cents have these cuds, the broken dies must have been employed for a significant time. Elsewhere among early coppers, large cud breaks on both sides would usually flag a die pair for removal, making such coins a scarcer die state.

No fully Mint State 1804 cents exist today by the standards generally used up until several years ago.  Around 2015 some of these cents were graded Mint State, reflecting the lowering of standards. As often, opinions are aplenty, and buyers can form their own. 1,200 or so exist in Circulated grades.  “Gradeflation” is probably here to stay, as grades go up and up some more, although the coins themselves do not change. No doubt, “Uncirculated” 1804 examples will become more available as old-time conservative grading fades from view.

Grades are typically Good to Fine, although quite a few VF pieces exist. EF and AU coins are very elusive. Many retooled and burnished coins are in numismatic circulation.

The so-called “restrike” of this date (pictured in the Guide Book) is actually a spurious concoction, as neither the obverse or reverse die was ever used in 1804. Sometime in the 1860s an unknown person took a rusted, broken obverse die of 1803, Small Date, Large Fraction, Corner of 3 in Drapery, tooled and lapped it, and amateurishly changed the last digit from “3” to a “4,” and combined it with a reverse die of 1820, the latter being a different design (with continuous wreath) than that employed in 1804. Apparently, the intent was to create a “filler” for cent collectors, and not to deceive. Multiple examples of this curious cent began to appear on the market in 1868 and attracted notice at the time. In the years since then, the 1804 “restrike” has been popular in its own right, and many numismatists aspire to have an example. Most are in Mint State with brown toning, often with some traces of lighter color. The dies were used for restriking multiple times over the years and are still in existence today.

Examples of the 1804-dated large cents are popular and always create interest when offered.