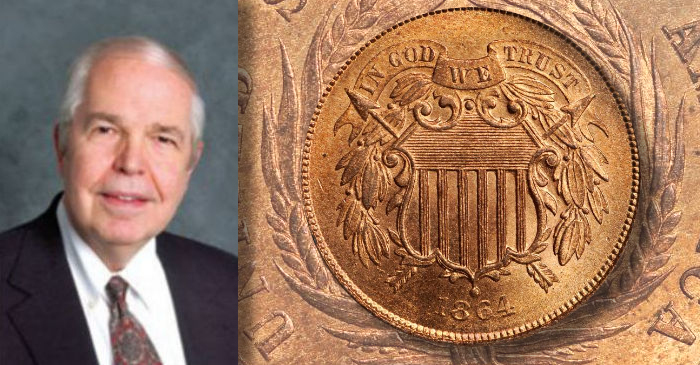 It seemed like a good idea at the time. Liberty Seated silver coins had disappeared from circulation and in bullion markets sold for a premium. Bronze Indian Head cents introduced in March 1864 had become popular, and it was expected that two-cent pieces would be popular in commerce as well. This was not to be, and after a large coinage in 1864 of 20,000,000 pieces, quantities diminished until 1872 when only 65,000 were made, after which only Proofs were made for collectors. 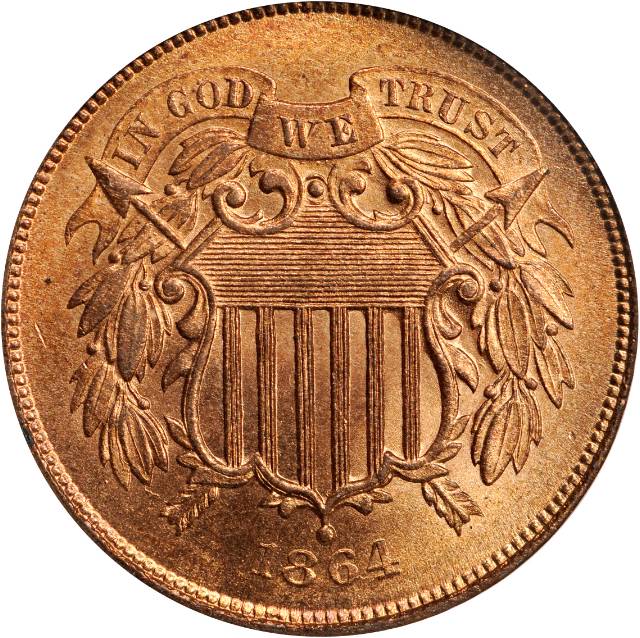 As to the design of the two-cent piece, the obverse depicts a heraldic shield with the motto “In God We Trust” on a ribbon above. This was the first appearance of this motto on a circulating United States coin and was suggested to the Secretary of the Treasury Salmon P. Chase by Rev. M.R. Watkinson in November 1861. The idea was hardly new, as Francis Scott Key in the fourth stanza of “The Star-Spangled Banner” wrote, “And this be our motto, In God is our trust.” 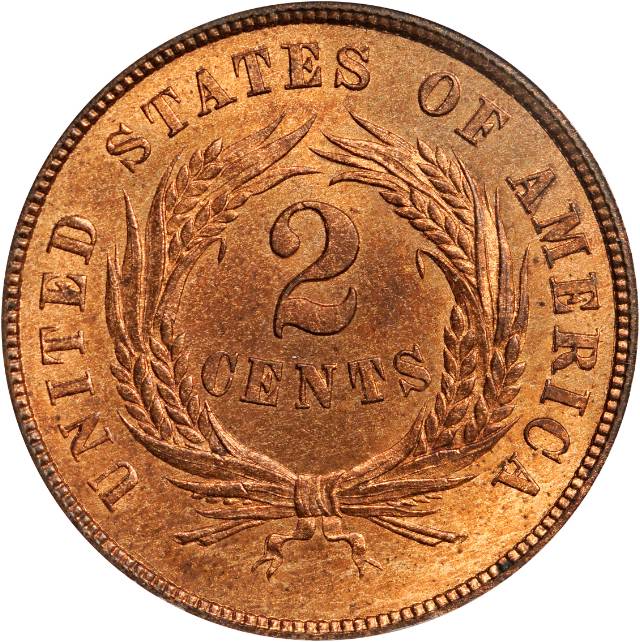 The coin’s reverse displays an open wreath with 2 / CENTS within and UNITED STATES OF AMERICA around the border. The motifs were by chief engraver James B. Longacre.

In 1864 the motto appeared in two versions — small letters, made in low quantities and scarce today, and large letters. For many years The Guide Book and other references listed the 1869/8 overdate, but this was later dismissed as a mere repunching of the date. Today, little notice is paid to this variety.

The 1864 motto and the 1873 are the key dates, while the 1872 is also sought by collectors due to its scarcity. Two-cent pieces were common in circulation into the early 20th century, but by the 1930s nearly all had disappeared.

Most numismatists desire just one coin for a type set. There are no great rarities so completing a set of two-cent pieces is easily enough done, although some patience may be required to obtain coins with excellent eye appeal. Is there room for one or two in your collection?

Bowers on collecting: An appreciation of Standing Liberty quarters (1916-1930)

Bowers on Collecting: The pivotal years for coin collecting — 1857 and 1858