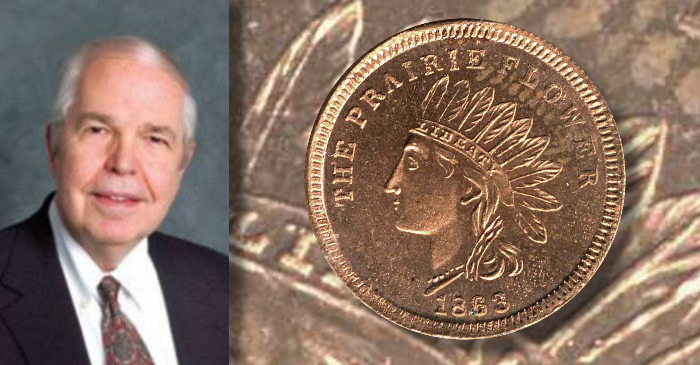 Several years ago I contributed an article to the Civil War Token Journal, on one of my favorite tokens.

I revisit it and send along with some excerpts:

I start the article with comments on time, patience, and the love for tokens in worn grades—musings about Civil War tokens in general.

One nice thing about collecting Civil War tokens is that there are nearly endless possibilities to specialize. Collecting one store card from each state is a popular way to start, an introduction to the super-daunting challenge of seeking one of each town within a state. There are enough “rare towns” that it will take several years to narrow a “want list” down to fewer than a dozen.

Time is an essential ingredient for collecting tokens. Enjoying an experience that continues for multiple years is part of the appeal of these tokens. Patience is also needed. Neither Bill Gates nor Warren Buffett could complete a set of rare towns within a year! The American Numismatic Society, which far and away has the most extensive collection of any institution—thanks to the donation of pioneer numismatist Edward Groh well over a century ago—lacks a number of towns.

In contrast to the above, if you wanted to assemble a set of one each date and mintmark of Morgan silver dollar 1878 to 1921, this could be done on the Internet in a few hours. If you opted for Mint State, say 63 or 64, it might take a day. If Bill Gates or Warren Buffett wanted an 1804 silver dollar, “The King of American Coins,” I could find one for them next week. If they wanted a Civil War token from Cranston, Rhode Island, sorry, but I can’t help.

That brings me to another aspect of Civil War tokens. While a Gem Mint State token is more desirable than one in, say, VF-20 grade, every advanced collection is filled with circulated pieces, usually in the majority. For some varieties, all known pieces are in grades below VF-20. Thus, one can love a worn token.

The preceding brings me to another favorite series—the title subject of this article. 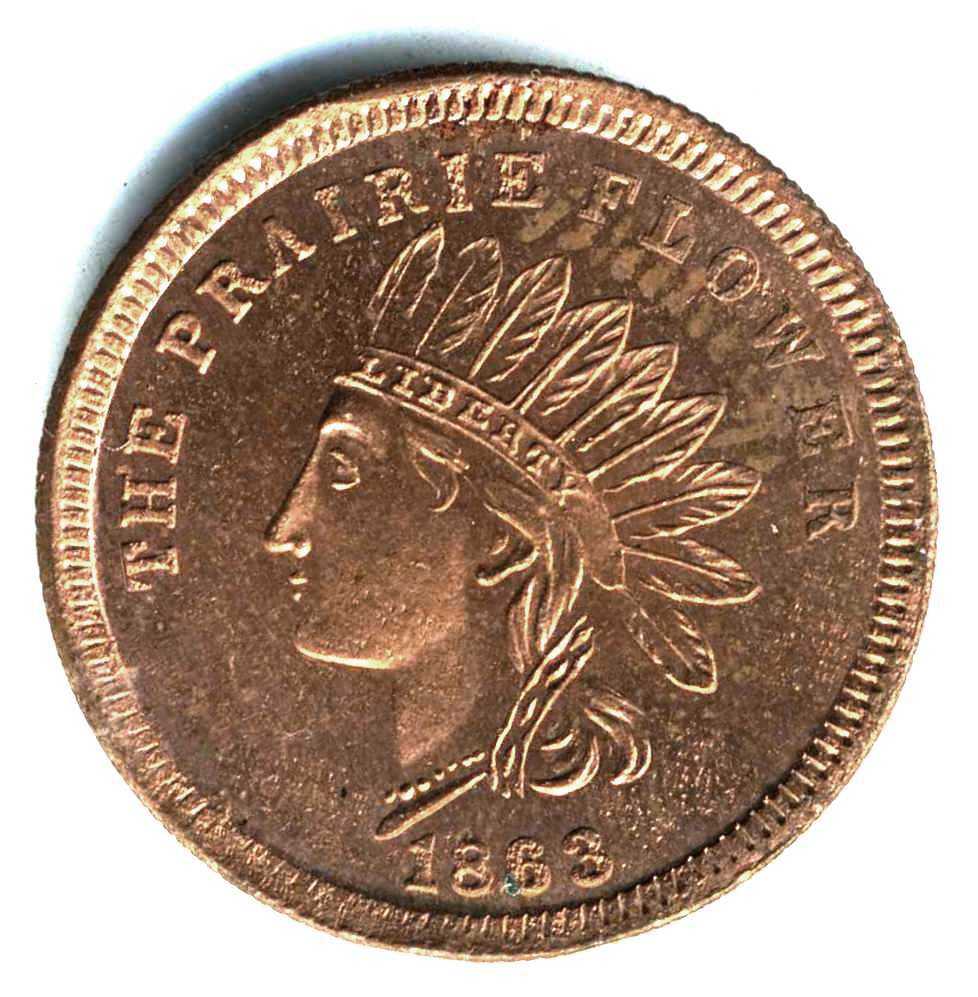 Many years ago I acquired an 1863 Indian Head store card with THE PRAIRIE FLOWER around the border, a copy of the current federal Indian cent design with UNITED STATES OF AMERICA.

Intrigued, I set about trying to find as many different as I could—that is, tokens with this obverse, but combined with advertising dies for dozens of different merchants.

First of all, who was the Prairie Flower? A real lass? Or a fantasy? As the token has no basis with any other token or coin of which I am aware, I have concluded that it was created by someone in the Cincinnati shop of John Stanton, the source of most of the other Indian Head Civil War tokens dated 1863 and 1864 and with 13 stars surrounding. The Indian Head hub is the same, and the merchants who advertised on the reverse of the Prairie Flower tokens also advertised on the reverses of other tokens made by Stanton.

As you probably know if you are familiar with Civil War tokens, Stanton was also the source of the Wealth of the South and related pieces, including odd mulings (such as the curious and marvelous muling with Abraham Lincoln on the obverse and NO SUBMISSION TO THE NORTH on the reverse), not to overlook the Excelsior Tobacco Co. rarities and the tokens of Steamer Lancaster No. 4.

The record shows that collecting Civil War tokens was very popular while the war was still going on. It seems that all of the larger minters in various cities produced pieces on order for numismatists. Collectors included Edward Groh, Henry Clay Ezekiel, J.N.T. Levick (in particular), and others, not to omit the enthusiastic leaders of the Rhode Island Numismatic Association. Thomas Cleneay, a token collector par excellence, wrote that he used to visit Stanton’s shop on a regular basis to see what was new and to acquire desirable specimens. James Murdock, Jr., and William W. Spencer were Stanton’s partners in what seems to have been a highly successful enterprise. Because of this activity, we have tokens struck in silver, over copper-nickel Indian Head cents, and other numismatic delicacies—all rare, some particularly so. 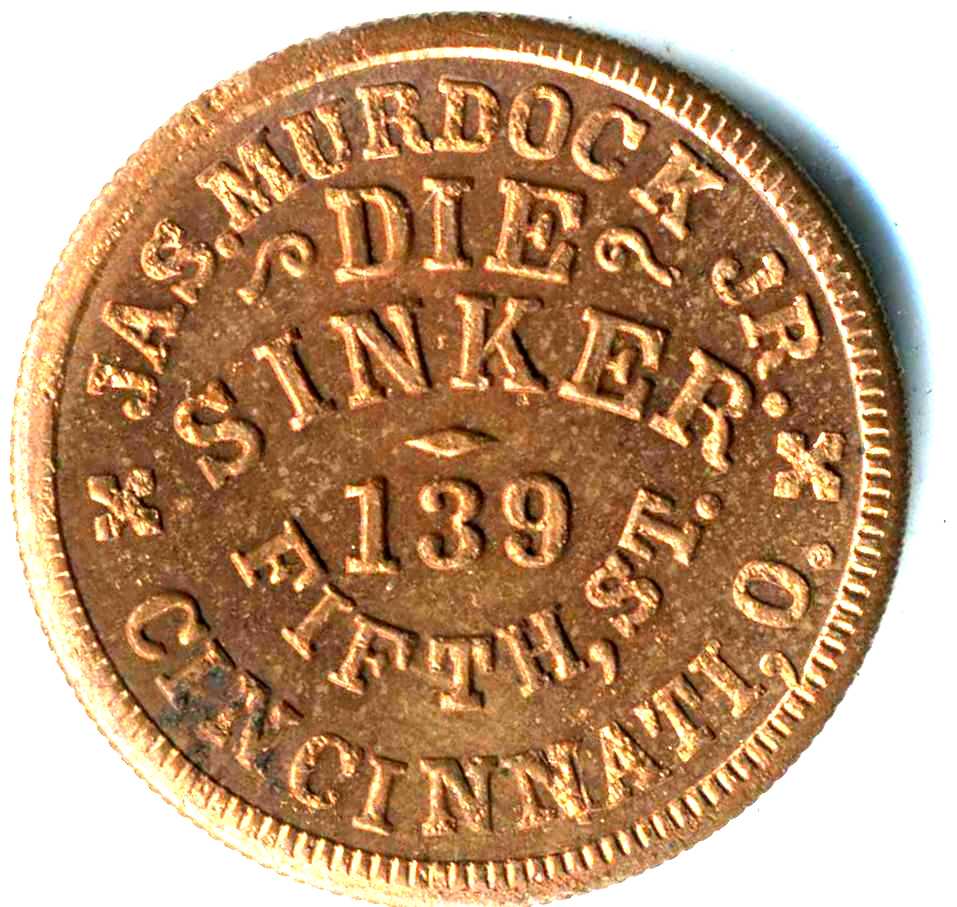 Stanton made two dies with THE PRAIRIE FLOWER inscription and the portrait of an Indian princess, one undated and known today as Fuld 1068, and the other dated 1863 and known as Fuld 1069.[1]

Larry Dziubek, in the Journal of the Civil War Token Society, Fall 1986, studied certain dies and, among other things, gave this state-by-state distribution of merchants using Stanton’s 1863-dated THE PRAIRIE FLOWER die:

For my own collection of Civil War tokens, I obtained nearly half of the known varieties. Most of these trace their pedigree to the collection of Virgil M. Brand (1861-1926), the Chicago numismatist. Certain of these later appeared in a sale conducted by Harmer-Rooke Numismatists in 1969. Certain others that went to Horace Brand (one of Virgil’s two brothers, the other being Armin) were sold to the New Netherlands Coin Co. in the 1950s and then resold en bloc to Donald M. Miller, the well-known Pennsylvania numismatist and a fine friend of mine. If you are a collector of this, drop me a note at and I will send it to you. As such, this blog is sort of an infomercial!