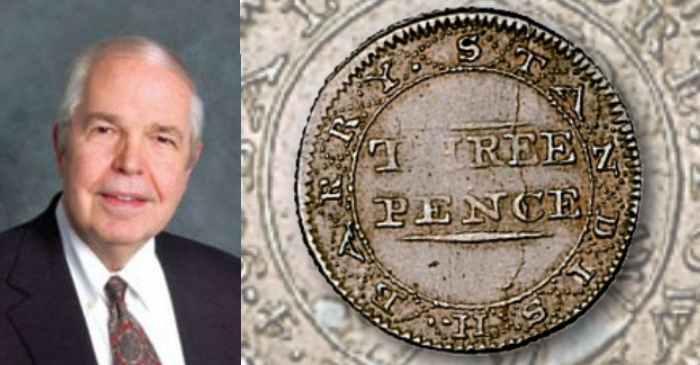 I wish you and yours a happy Independence Day. We are all so fortunate to live under the Stars and Stripes—with a history of democracy extending back over 235 years, unequalled in the world.

As this is a numismatic column, it may be appropriate to showcase the only coin in the Guide Book that is specifically dated July 4th:

Standish Barry, a Baltimore silversmith, struck a distinctive silver threepence token in 1790. Barry, 27 years old at the time, may have intended the piece to commemorate the anniversary of American independence, or perhaps some special celebration was held in Baltimore which occasioned its issue. The piece bears a male portrait on the obverse, thought to be the mayor of Baltimore, although it could be Barry himself. The specific day July 4 in addition to the year (expressed as 90) is a distinctive feature. The coinage production apparently was extremely limited for his threepence are exceedingly rare today. 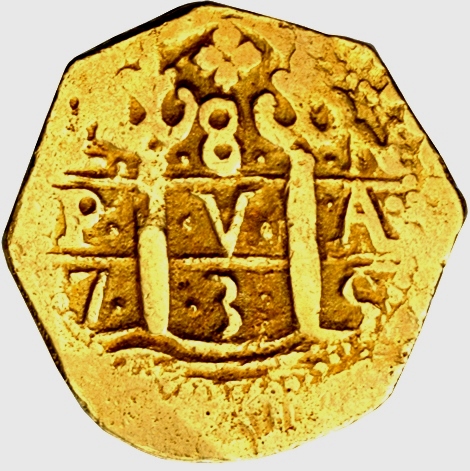 About this time he is believed to have made imitation Spanish-American gold doubloons hallmarked SB, per the research of John Kraljevich in the description of a coin in the Eliasberg Collection sale, 2005, Lot 3012, a scenario similar to Ephraim Brasher’s imitation 1742 Lima gold doubloon. 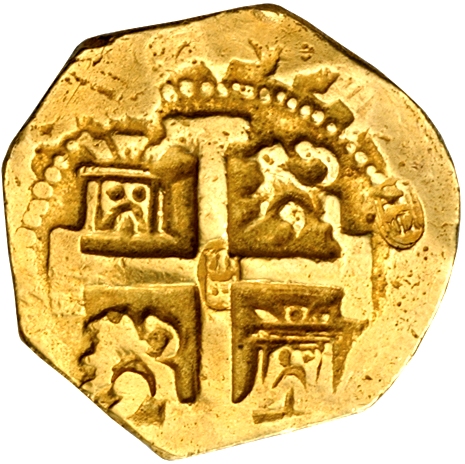 Barry was born in Baltimore on November 4, 1763. By the age of 16, he had developed patriotic fervor and enlisted in the Revolutionary War. Afterward, he set up business in the city of his birth and engaged in a variety of activities, including silversmith, watchmaker, and jeweler. He first advertised as a watch and clockmaker and engraver in the Maryland Journal on November 26, 1784, having completed his apprenticeship in the trade with David Evans. Not long afterward, he became a partner with Joseph Rice, an arrangement that continued until June 1787. His memorable threepence pieces were issued several years later. In the meantime, it seems that he was involved in the assaying of gold coins, and created his own versions imitating Spanish-American pieces. In New York City his contemporary, Ephraim Brasher, did the same thing. On October 10, 1788, he married Agnes Thompson. The couple had six children, one of whom, Standish Jr., served as an assistant treasurer of the United States.

Maintaining an interest in the military, by 1798 Barry was a lieutenant in the Baltimore Independent Blues, earlier called the Sans Culotte, organized to defend the city should a war with France develop. At that time the French were seizing American ships on the high seas, and tensions ran high. In the early 19th century he was listed in directories as a watchmaker and silversmith at 20 North Gay Street. In 1808 he was requested to quote for supplying 3,000 gross each of coat and vest buttons with insignia of the 1st and 2nd regiments.

During the War of 1812 he served in the battle with the British at Bladensburg, Maryland, on August 24, 1814, and in the next month in Baltimore, when the British attempted to land after they had sacked Washington, but were repulsed by “the rockets’ red glare, the bombs bursting in air” fired by troops manning Fort McHenry in the harbor. Barry, or someone with a similar name, is found in later accounts in which he was a grocer and also held minor public offices.

Nearly all examples of the silver threepence show significant wear, indicating that these must have circulated for a long time. The gold doubloon, a recent discovery, is unique.

Description from the forthcoming second edition of the Whitman Encyclopedia of Colonial and Early American Coins: 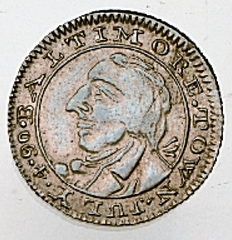 Whitman-8510 • 1790 Standish Barry Threepence • Obverse: Male portrait facing left, possibly of the mayor of Baltimore or of Barry. BALTIMORE TOWN JULY 4 90 around border, with ring separating it from the portrait. 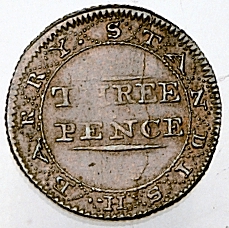 • Reverse: THREE / PENCE in two lines at the center. STANDISH BARRY among ornaments at border, with a ring separating the inscription from the central denomination. • Edge: Plain. • Notes: 14.5 mm Typically on a small planchet, with rim incomplete. Obverse die buckled on some impressions. Reverse die with border-to-border crack at left, on some specimens. 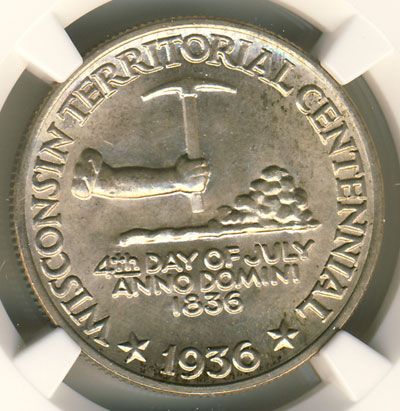 For extra credit here is the 1936 Wisconsin Territorial Centennial half dollar. Note the inscription.

Reflections on the silver coinage of 1916