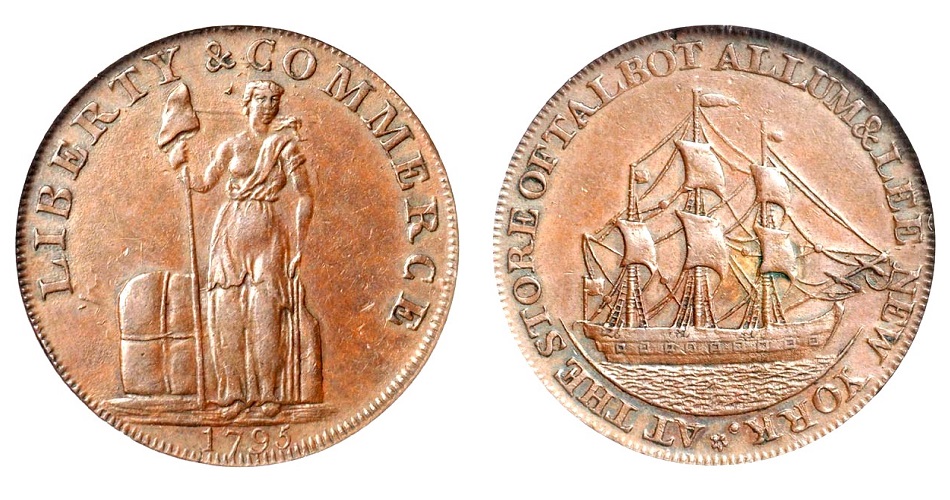 Obverse and reverse of a 1795 Talbot, Allum & Lee copper cent. These were made in Birmingham, England, to the order of a New York City merchant. (Whitman-8620). Hover to zoom.

At 241 Water Street in lower New York City, the firm of Talbot, Allum & Lee engaged in the India trade, importing goods by ship. Formed in 1794, the partnership operated only until 1796. Principals included William Talbot, William Allum, and James Lee. This particular district of the city was a beehive of activity with vessels continually arriving and departing. Numerous ships’ chandlers, grog houses, cheap lodging places, and other establishments for the convenience of sailors did a lively business.

Copper tokens dated 1794 and 1795 bearing the image of the standing goddess of Commerce on the obverse and a fully-rigged sailing ship on the reverse were struck to the order of Talbot, Allum & Lee by Peter Kempson & Co., Birmingham, England, and imported into America by the partners. The quantity has been estimated at over 200,000 coins, but no original records have been located.

At the time, copper coins in circulation in New York and nearby areas were a curious assortment of issues made by or for various states (Connecticut, Massachusetts, New Jersey, New York, and Vermont), British halfpence, counterfeits, and other pieces. The Liberty Head copper cents made at the Philadelphia Mint beginning in March 1793 were not particularly numerous. Generally, just about any copper coin the size of a British halfpenny (about the same size as an American cent) would trade in commerce at the value of one cent. It was popular speculation and, at the same time, a worthwhile advertising scheme to have copper tokens privately struck for a cost of less than a cent apiece, and pay them out at one cent.[1]

In accordance with this practice, Talbot, Allum & Lee tokens dated 1794 were put into circulation where they served at the value of one cent in local and regional commerce. Pieces dated 1795 seem to have been less popular. Apparently, undistributed tokens piled up at the waterfront store. What should be done with the hoard?

The coins were a godsend to the Mint, which had been experiencing severe difficulties obtaining copper stock from which to strike half cents and cents. Supplies of this metal were erratic and of uncertain quality and included such varied sources as copper sheet for roofing and the protection of ships’ hulls, and old pots and kettles.

Planchets for United States half cents were cut by punching discs from the Talbot, Allum & Lee tokens, most of which were probably in mint condition. Today it is not unusual to find a 1795 or 1797 U.S. half cent (but not one dated 1796) with faint traces remaining of the token undertype — usually some of the ship’s rigging and/or some of the letters around the border of the token. Such half cents are highly prized by numismatists as they are literally two coins in one.

Today in September 2020, a representative Talbot, Allum & Lee copper is very affordable — with nice ones selling in the hundreds of dollars. Is there room for one in your collection?

[1] The circulation of private one-cent tokens would reach a peak in 1837-1838 when millions of such pieces flooded commercial channels at a time when silver and gold coins were not being paid out by banks and were hoarded by the public; these are known as Hard Times tokens by numismatists today. During the Civil War, especially in the year 1863, countless millions of cent-size bronze (mostly) tokens again filled a need when specie payments had been suspended by the Treasury Department and banks.