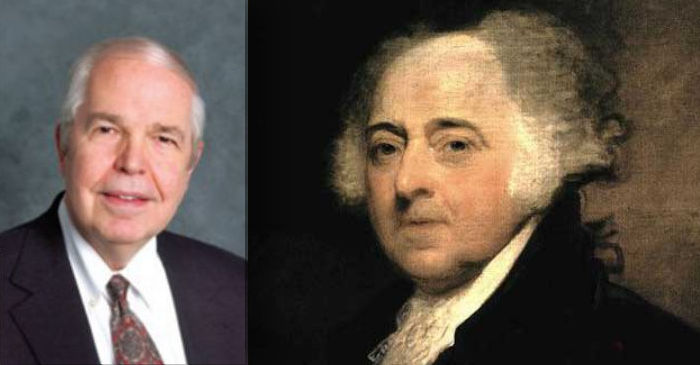 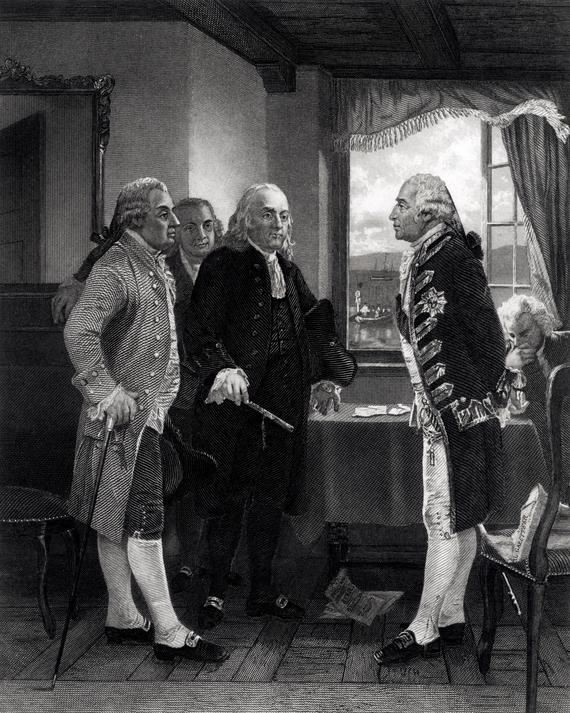 Alonzo Chappel’s depiction of the 1776 Staten Island Peace Conference. On the right are Admiral Richard and Lord Howe. On the left are John Adams, Edward Rutledge, and Benjamin Franklin.

Coinage: In contrast to the wide variety of new designs and types that characterized the administration of George Washington, those of his successor, John Adams, are far fewer. The earlier designs remained mostly the same. 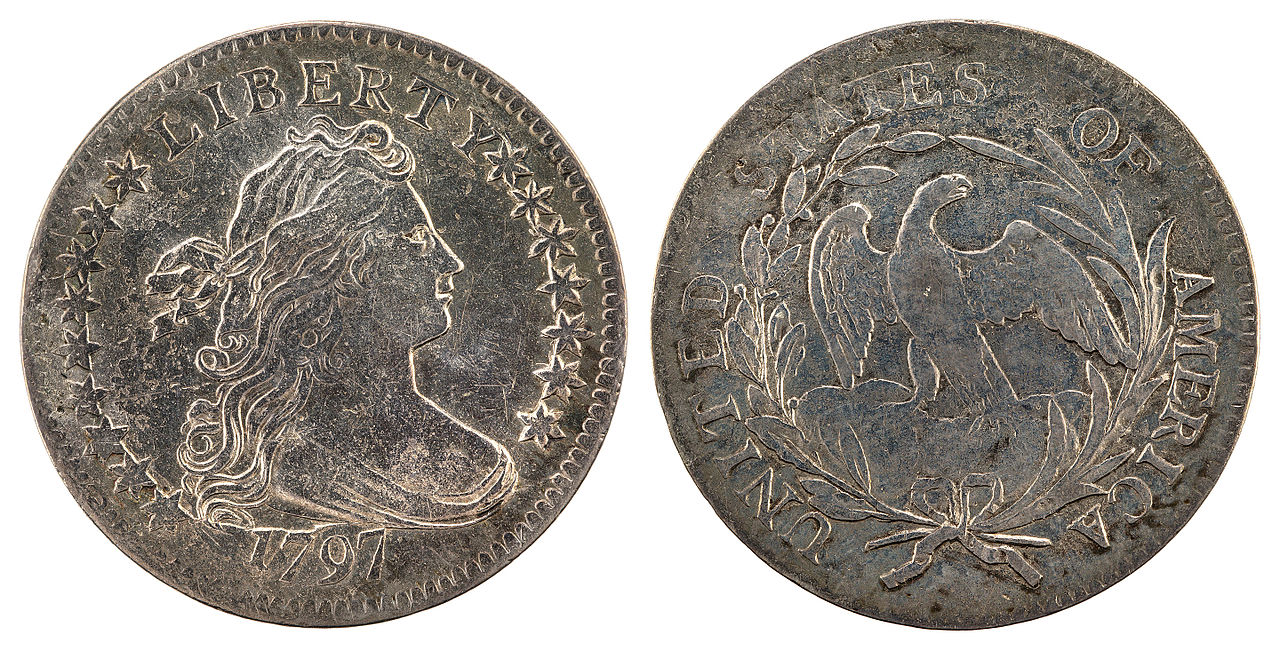 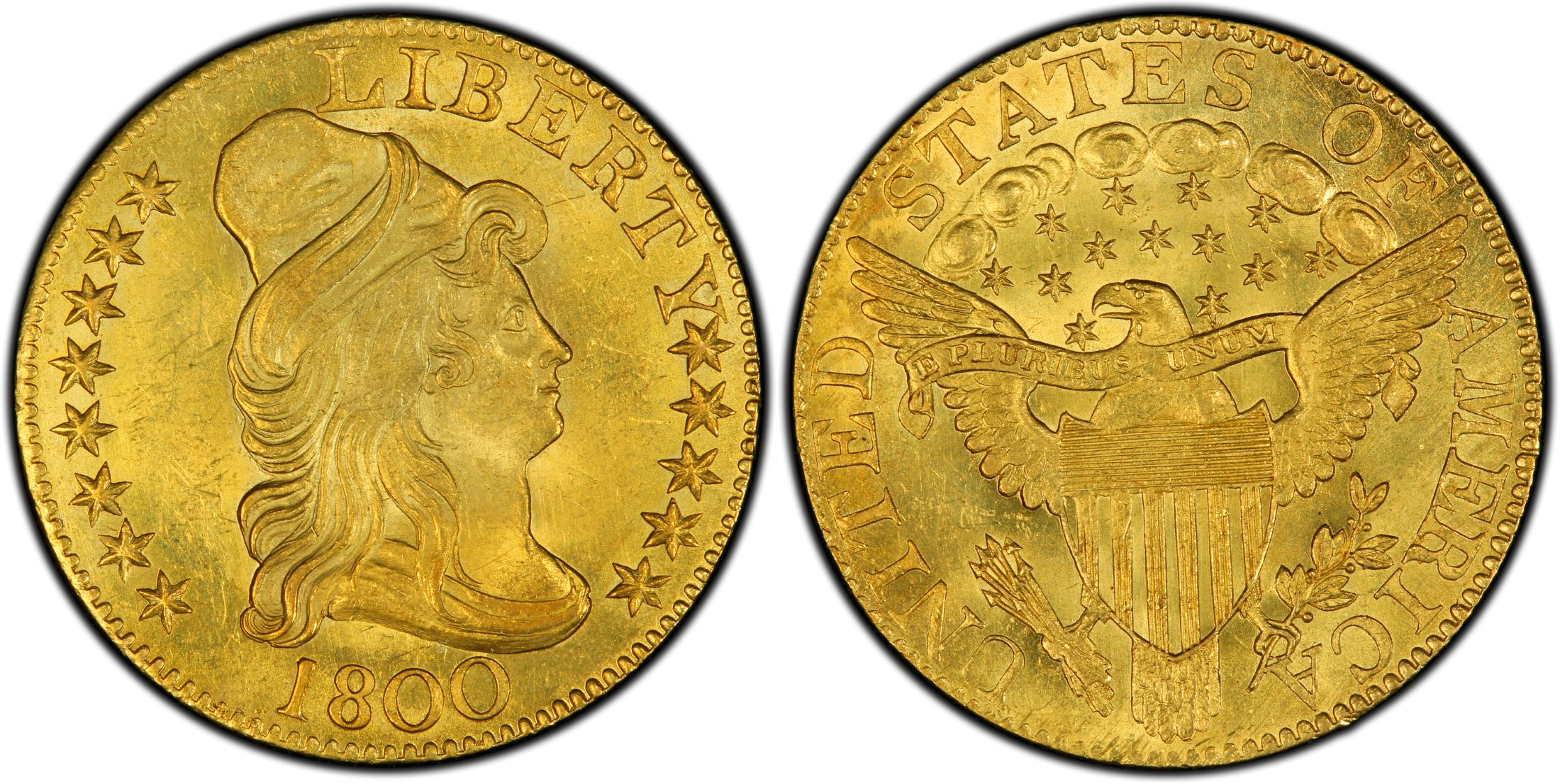 Gold coins of the $2.50, $5, and $10 denominations were made combining the conical cap obverse with, for certain issues, the Small Eagle and Heraldic Eagle reverse. Several rarities were created in the half eagle series.

First lady: Married Abigail Smith (1744 to 1818), on October 25, 1764. The union was a particularly happy one, and the couple remained deeply in love, exchanging romantic letters when they were apart. The couple had five children: Abigail Amelia Adams), John Quincy Adams (who became president),  Susanna Adams, Charles Adams, and Thomas Boylston Adams.

Especially remembered for: First president to compete in a national election. The XYZ Affair.

John Adams was born in Braintree (now known as Quincy), Massachusetts, son of John and Susanna Boylston Adams. He studied law and graduated from Harvard in 1755. Inspired by patriotic fervor, he served in the Continental Congress from 1774 to 1778, was commissioner to France in 1778, minister to the Netherlands in 1780, and chief negotiator in the 1783 peace treaty. Later, he was minister to England from 1785 to 1788, and vice president of the United States 1789-1797 (under Washington). In the 1796 election, rival Thomas Jefferson came within three Electoral College votes of being named president. Due to a flaw in the Constitution (later corrected), the loser became his vice president, creating much friction.

When Adams became president, the war between the French and British was causing great difficulties for the United States on the high seas and sparked intense differences among political factions within America. He sent three commissioners to France to try to quiet matters, but in spring 1798, it was learned that French Foreign Minister Talleyrand and the Directory refused to negotiate unless the United States paid a bribe.


Adams reported the dire matter to Congress. Correspondence was made public, in which the Frenchmen seeking bribes were named only as “X,” “Y,” and “Z.” The XYZ Affair became the cause of the day, and Adams’ stance against the extortion made him a popular hero. By time of the 1800 election, Adams’ Federalist party was divided on matters of foreign policy, while the opposing Republicans were united in their stance.

During his administration the seat of the government was moved from New York City to Washington City, District of Columbia, later simply called “Washington.” He was the first president to live in the White House, arriving on November 1, 1800, just before the next presidential election. In a letter to his wife, he stated, “I pray Heaven to bestow the best of Blessings on this House and all that shall hereafter inhabit it. May none but honest and wise Men ever rule under this roof.”

After his presidency, Adams retired to his farm in Quincy, Massachusetts.