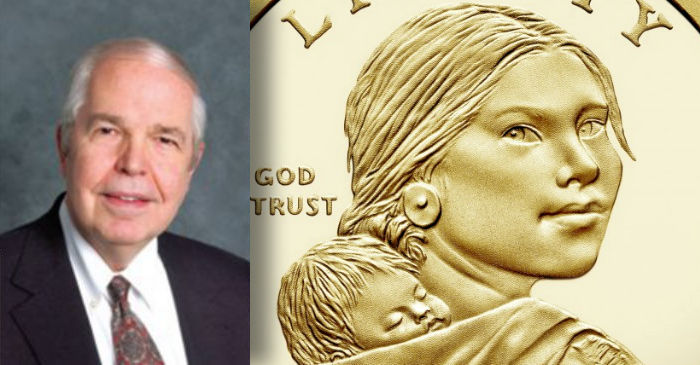 This week I continue my comments on Sacagawea dollars. Conceived in 1997 and designed in 1998, by 1999 they were ready to be minted.

The Annual Report of the Director of the Mint for the fiscal year ending September 30, 1999, included this:

At year-end we finalized the alloy for the Sacagawea dollar—or as we call it, the golden dollar—after almost two years of experimentation and coordination with business stakeholders.

We’ll produce more than 100 million golden dollars for release in February when our consumer awareness and business education campaign ramps up. We’re readying a national print and TV consumer campaign, and our business-to-business outreach team is finalizing materials, interactive displays, and schedules of appearances. We’ve met repeatedly with banking and retail organizations and tested public perception of the new coin.

The above optimism was hardly new. Essentially the same enthusiasm was published prior to the launch of the first Eisenhower dollars in 1971 and the first Susan B. Anthony dollars in 1979. Both of them laid the proverbial egg with regard to being accepted by merchants, bankers, citizens, and others. At the present time, the end of March 2018, I still have never received a mini-dollar in change! I am old enough, however, to remember getting silver dollars in change, occasionally in the 1950s and early 1960s, and in Nevada, they were fairly common in stores and, of course, on the gaming tables.

In August 1999, President Bill Clinton appointed Jay Johnson as director of the Mint, succeeding Philip Diehl. Johnson had served earlier in various government offices and at one time was a representative to Congress from Wisconsin. He spent 36 years in media, including radio and television broadcasting. Confirmed by the Senate in May 2000, he served as Mint director until in August 2001 when in the change of administration President George W. Bush appointed Henrietta Holsman Fore as director.

I and most other numismatists who had met with Jay at various conventions and events were saddened by this. Jay in his tenure was without a doubt the most enthusiastic and numismatically-oriented director in Mint history up to that time. 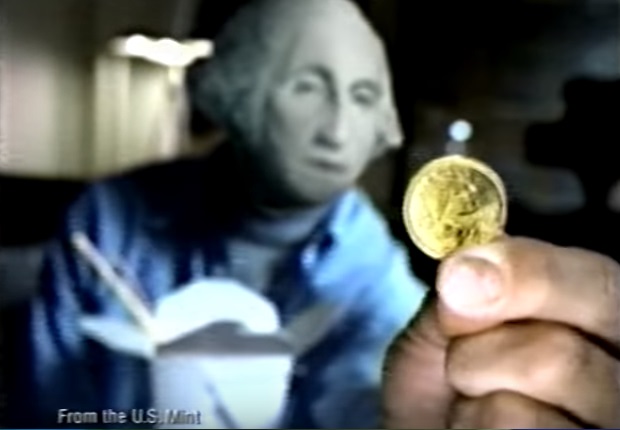 A U.S. Mint commercial in 2000 promoting the Sacagawea dollar.

He helped create innovative advertising for the “golden dollars.” One television spot featured George Washington holding one. Kermit the Mint Spokesfrog was on the screen as well, mainly promoting Statehood quarters. Similar to what Mary T. Brooks had done to a slightly lesser extent during her tenure, Johnson was always available to the numismatic community, appeared at many events, and answered questions. We (the numismatic community) were very lucky. 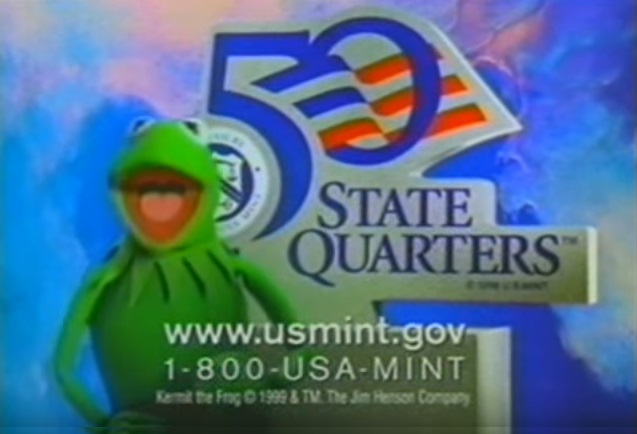 As planned, in 1999 and 2000 the Mint promoted the Sacagawea dollars by advertisements on the radio and television as well as with print announcements. Kits were supplied to those interested and included a “Use the golden dollar here” decal that could be affixed to a glass entry door. The official view was that the launch was a spectacular success, per this in the Annual Report of the Director of the Mint, 2000:

Formally introduced in January 2000 and propelled by full-scale outreach campaigns, the Mint’s Sacagawea Golden Dollar has achieved overwhelming success in record time. In its first nine months, demand triggered the production and shipment of 979 million Golden Dollars — it took 14 years for the Susan B. Anthony dollars to reach demand at that level!

By year’s end, the billionth Golden Dollar rolled off our presses. Hundreds of millions of Americans are using the coins and collecting them. This enormous popularity resulted in a profit of over $800 million and was a major component of the Mint’s record-breaking total revenues for the year.[1] The Golden Dollar’s clearly successful introduction underscores the value of the Mint’s vigorous market orientation. We were able to harness all of the marketing, partnering, and educational tools available to create, rather than merely respond to, demand — and in a single year have made the Golden Dollar a fixture in American coinage.

As there were slightly over 300 million citizens in America, this meant that nearly everyone was using them.

Reality: This was mighty strange reading to nearly everyone in the numismatic community—as hardly anyone had received one in circulation. Paper bills remained as common and plentiful as ever and did not seem to be on their way to disappearing. 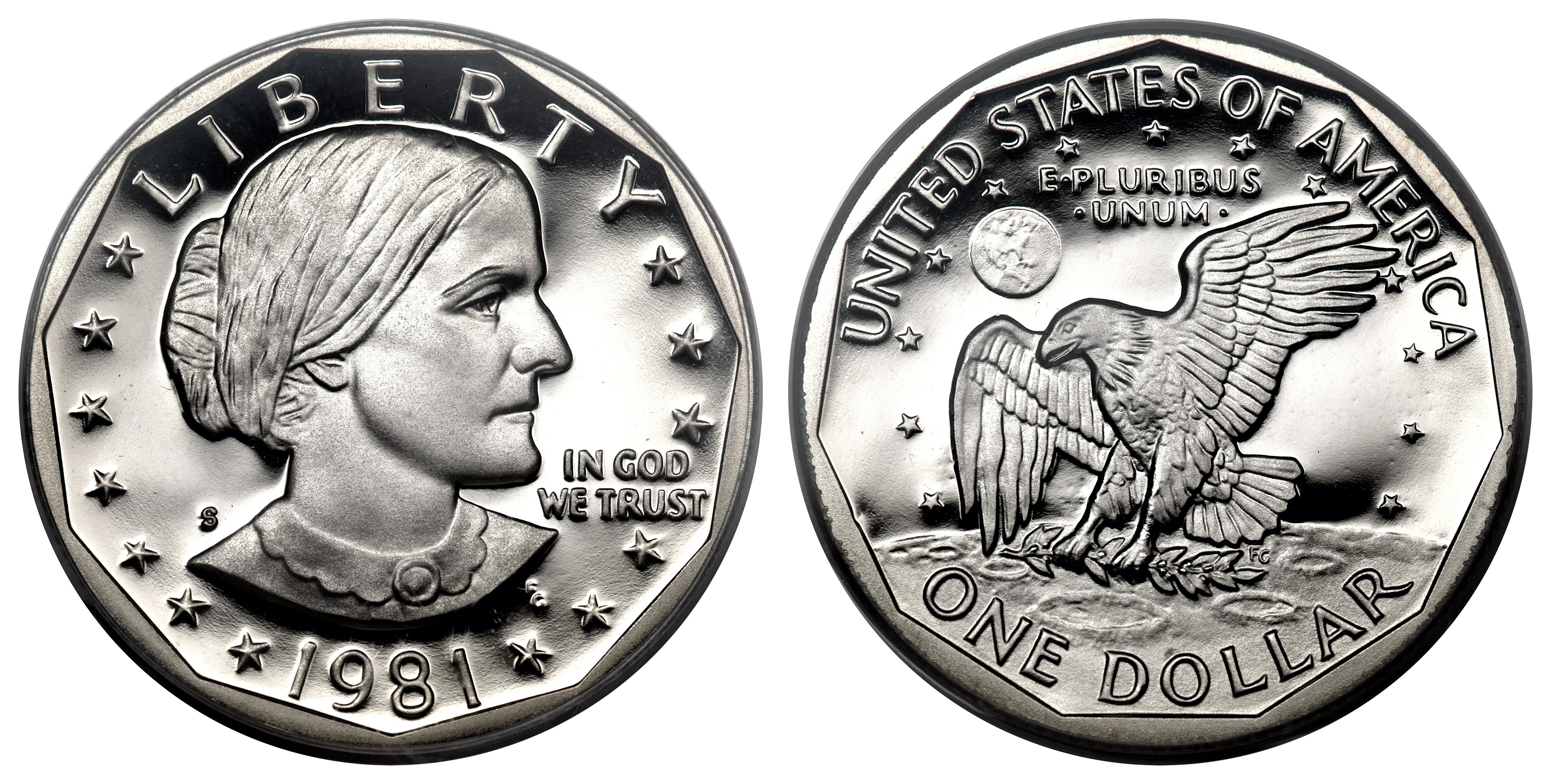 While merchants, citizens, and others generally ignored them, this was not so with coin collectors. Upon their release, Sacagawea coins were warmly and enthusiastically embraced by the numismatic community. Nearly everyone loved them, a contrast to the rather mild reception given to SBA dollars, which never gained much traction with collectors after they were released—partially because everyone had hoped for a classic Liberty Cap motif, as was preferred by Chief Engraver Frank Gasparro and by several popularity polls.

Complicating the frigid reception of the public to the new Sacagawea dollars there was the problem with the coins themselves. The alloy used to make them was chemically active, causing many coins to become stained or spotted—black, brown, purple, you name it. In 2000 and in 2001 several rinse compounds were used. One that treated about 2,500 coins in 2001 imparted a distinctive pale patina.

Faced with many complaints, mainly from collectors and not the general public, the Mint endeavored to make a silk purse out of a sow’s ear, issuing this statement with a positive spin: “Its color will eventually become darker, giving your coins an Antique finish… The brighter, brass highlights, in contrast with the darker background, accentuate the profile and add a dimension of depth to the depiction of Sacagawea and her child.” 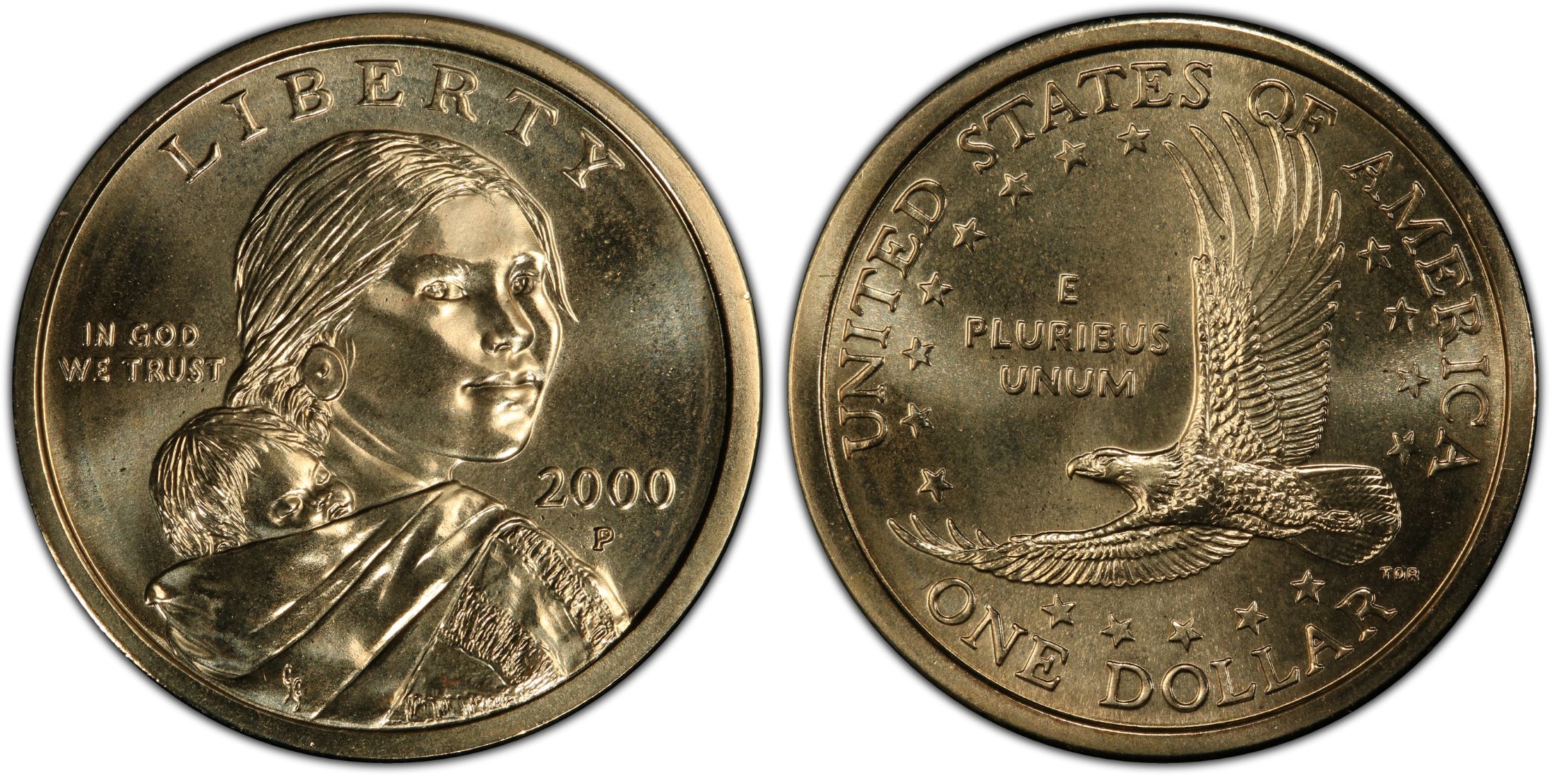 Unbeknownst to anyone at the time, in 2000 and in the next several years, a rare die variety of the Sacagawea dollar had been given free to buyers of certain Cheerios cereal boxes. Recipients spent them or set them aside, and even today in 2018 there are probably some “out there.” Owners are not aware that they are worth thousands of dollars each!

Here is the story:

No one knew it at the time, but in 1999 about 5,500 2000-P Sacagawea dollars were struck from a special reverse die, with the tail feathers showing prominent veins. In that year the Mint was eager to promote public interest and acceptance of the new dollar. It arranged with General Mills, Inc., the Minneapolis manufacturer of cereals and other foods, to supply 5,500 coins struck in late summer or early autumn 1999 with a 2000-P obverse and the prototype reverse with prominent veins. The difference in the reverse details was not noticed at the time. General Mills advertised a “treasure hunt”—one in every 2,000 boxes of Cheerios would contain a new Sacagawea dollar, not yet in general release, and a 2000-dated Lincoln cent. “The only place to get either coin is in a box of Cheerios.”


Remarkably, it was not until February 2005, or over five years later, that this special variety was recognized by numismatists when one was sent by California collector Pat Braddick to NGC. By that time the Cheerios dollars had been widely dispersed, many had been spent, and those saved by chance could not be found other than by expensive and perhaps not fruitful advertising.

After the discovery was publicized there was a rush to find them. In a retrospective article, “Cheerios dollars soften,” in Coin World, June 29, 2009, Bill Gibbs wrote: “A year ago an example of the ‘Cheerios’ dollar sold at auction for nearly $35,000! However, the initial excitement that accompanied its discovery has waned, and savvy collectors can now acquire an example for a fraction of its price at its market apex.” 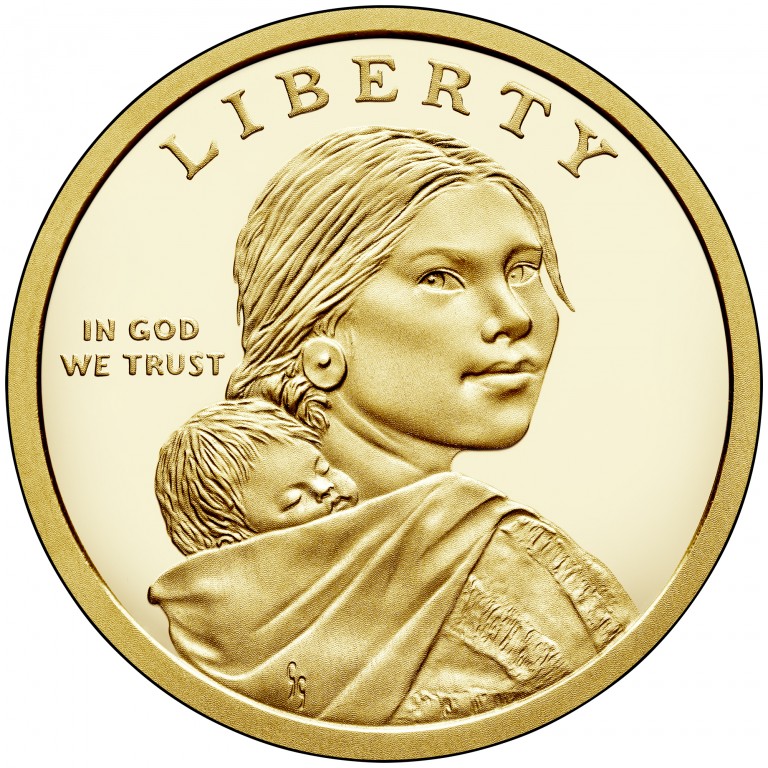 The obverse of the 2017 Native American One Dollar Proof Coin.

I love Sacagawea dollars, and to keep my collection up to date in 2016 I paid $6,750 for an MS-67. The PCGS Population Report lists these as “Cheerios dollars,” and as of March 26 had 96 certification events, while NGC lists 43. As high-value coins often have many resubmissions, perhaps the net number certified is around 100.

[1] Note: This aspect, little noticed by anyone at the time, explains in part why huge quantities of SBA and, now, Sacagawea dollars were minted, although there was relatively little public interest in them, this ebullient report notwithstanding.