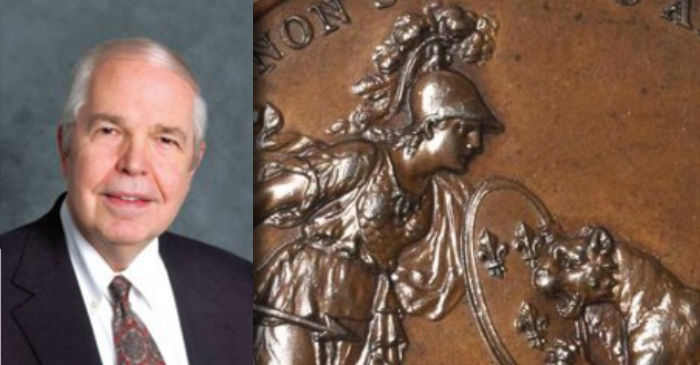 It seems like only yesterday, but it was over a decade ago that Katherine Jaeger and I created The 100 Greatest American Medals and Tokens for Whitman Publishing. This title has been very popular and remains in print. Check the Whitman website or with your favorite coin dealer or bookseller. 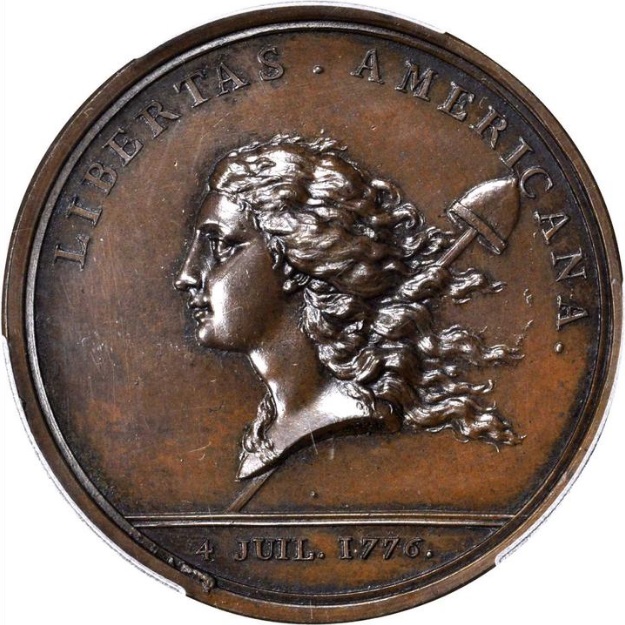 We surveyed leading collectors, dealers, researchers and others and asked them to name in order those they thought to be most important. Medals can be important in different ways—for history or for art, or for rarity or numismatic value. In my mind, importance in history and aspects of art and the design took precedence to rarity or market price. Both Katie, as my co-author was nicknamed, and I thought that the Libertas Americana medal would come in first, and it did, by a landslide. 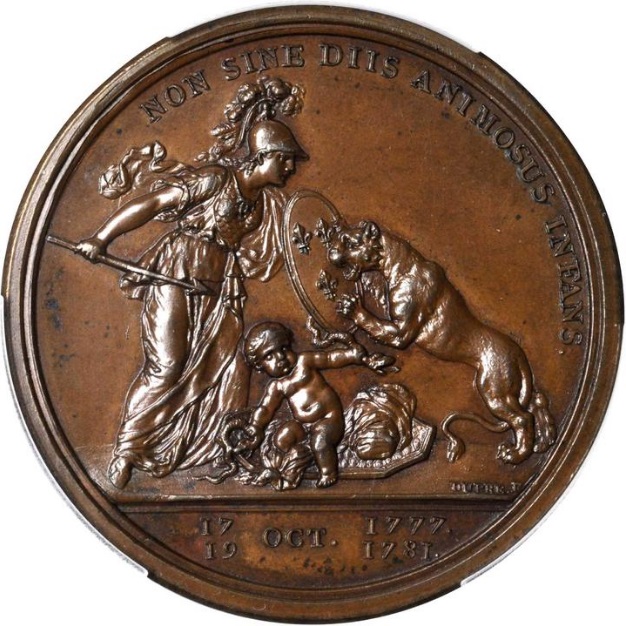 This week in Coin Update and Mint News Blog, I start a retrospective series on American medals. Time was that medals in numismatics were more important than federal coins, such as in the early 19th century. Hardly anyone paid attention to current Liberty Seated silver coins, so important today in 2018, but a Libertas Americana medal or a medal awarded by Congress was of high importance. Of the last, collectors included Thomas Jefferson and Daniel Webster, to mention just two.

Medals in the marketplace had been quiet for a long time, but beginning in a large way with the efforts of George and Melvin Fuld, the formation of the Token and Medal Society (I was among the first members in 1961), the books written by Russell Rulau, and other activities, they grew in importance. All the while the U.S. Mint has stocked medals of various kinds—ranging from old subjects struck from modern dies to an illustrious series of modern medals illustrating events in 20th century history—World War II being an important subject.

For our 100 Greatest book we invited David Alexander, a long-time specialist, to contribute a foreword message, which I repeat below. Since then he has written the standard reference on the brilliant Society of Medalists series of over 125 medals issued at the rate of two per year, beginning in 1930 and ending in the 1980s (copies are available from the American Numismatic Society).

I will see you next week with more. In the meantime, here are David Alexander’s words:

Medal collecting is enjoying a renaissance in the United States today, echoing the vast popularity medals enjoyed in the pioneer era of American numismatics in the mid-19th century. Medals occupied an honored niche in all of the great collections from the first stirrings of numismatic interest in the 1850s until the 1890s triggered the sudden and all-consuming focus on U.S. coins by date and mintmark.

After that time, medals underwent decades of neglect, despite the virtually limitless topical interest they offer. Medals span the worlds of art, history, biography, science, and industry and are unmatched in the colorful variety of sizes, shapes, and metals in which they are struck or cast. The medal was popular with European collectors since its reinvention by Antonio Pisano (called Pisanello) in Italy during the 15th century. Medals were a recognized medium for the expression of fine art and commemoration in Italy, the German States, the Netherlands, France, and Britain.

Medals relating to American colonial history were cataloged by C. Wyllys Betts, although his researches were published in 1894 after his death, and the items he included are still referred to as “Betts medals”—to the occasional amusement of our European colleagues. The Continental Congress fathered the new nation’s first official medals, the famous Comitia Americana series, hailing Revolutionary War heroes beginning with a medal commemorating George Washington’s role in the British evacuation of Boston.

These earliest medals were struck at the Paris Mint since the struggling United States would have no operating mint until 1793. Enterprising merchants Jacques Manly and Joseph Sansom created the earliest privately issued medals on what became a favorite national theme, the life and career of George Washington. A key factor that caused American medal collecting to lag behind has been the lack of adequate guides and catalogs, but Washingtonia is a notable exception. This area flourishes today thanks to William S. Baker’s classic Medallic Portraits of Washington, first published in 1885, updated in modern times by Russell Rulau and Dr. George Fuld.

The infant Philadelphia Mint soon played a major role in developing the American medal through its series of Indian peace, presidential, military and naval, exposition and award, and other medals of all kinds. U.S. Mint medals have become another well-charted area, made accessible to today’s collectors by R.W. Julian’s masterful Medals of the United States Mint: The First Century, 1792–1892, published in 1977.

Outside the Mint, private medalists of the 19th century added to the corpus of America’s medallic treasures: the exceptionally talented engraver Charles Cushing Wright, Robert Lovett Jr., his prolific brother George Hampden Lovett, Boston’s Joseph Merriam, and John Adams Bolen of Springfield, Massachusetts, among them. The Civil War triggered a major flurry of activity in the form of award and commemorative medals for battles, heroes, and veterans’ organizations on both sides of the blue-gray divide.

As the 20th century dawned, the U.S. Mint faded from leadership in medallic art. The honors passed to private companies, notably Whitehead & Hoag of Newark, New Jersey, and the youthful Medallic Art Company of New York City. Although it struck a vast array of medals, the Newark firm deliberately avoided any emphasis on the artistic component of its medals, preferring to emphasize the utilitarian business and industrial aspects of the products.

Medallic Art, on the other hand, based its total business strategy on the closest possible interaction with the art community. The firm was born just as the art medal came into its own with the creation in 1908 of the Circle of Friends of the Medallion by Robert L. Hewitt and Charles DeKay. Until 1915, the circle issued two art medals a year inserted in hardbound books, with Medallic Art producing the first and last issues.

This two-medal-per-year format was revived by George Dupont Pratt when he launched the Society of Medalists (SOM) in 1928 and issued its first art medals in 1930. This greatest series of true art medals continued into the 1990s. Produced with the stated goal of fostering excellence in American medallic sculpture, SOM medals offer the bas-relief art of many legendary artists whose work in any other form would be prohibitively expensive today.

Some nonprofit organizations produced a medal series, notably the New York City-based American Numismatic Society. Their first medal in 1866 by Emil Sigel was dedicated to the memory of Abraham Lincoln. Producing this ultra-high-relief medal nearly bankrupted the young society, but it rallied and went on to issue many outstanding medal issues into the 21st century, continuing today.


Medallic Art Company issues covered a wide spectrum of events and subjects, including state and local anniversaries, most of the finer issues of the American Revolution bicentennial, and medals for colleges and universities, business and industry, aviation and space, railroads and shipping, learned societies, and organizations of all descriptions.

Its work for numismatic groups included the convention and award medals of the American Numismatic Association (ANA) over several decades. Typical of its work for smaller organizations is the nearly century-old series of presidential medals of the New York Numismatic Club, now struck by Medalcraft Mint of Green Bay, Wisconsin. Medallic Art was a major producer of presidential inaugural medals. The U.S. Mint struck those of Herbert Hoover to Harry S. Truman, but Medallic Art struck most of the classic designs into the 1990s, beginning with Dwight D. Eisenhower in 1953. This specialized area was galvanized by the catalogs of Richard Dusterberg, Neil MacNeil, and H. Joseph Levine, which created a collecting boom in inaugural medals in the mid-1970s.

The world of the medal was impacted by the meteoric rise of the Franklin Mint after 1967. This merchandising giant aggressively marketed its coin-relief, proof-surface products as “medals” to a wide spectrum of non-numismatic buyers. Franklin Mint pieces were only tangentially related to high-relief art and historical medals, and their lamentable secondary-market performance gave medals a bad name to a public unaware of such distinctions.

Numismatic auctions have played a pivotal role in reigniting collector enthusiasm for American medals. Sales of the great Garrett family collection by Bowers and Ruddy Galleries in 1979 through 1981 electrified many series, including privately issued 19th-century medals and issues of the U.S. Mint. The great inaugural-medal and U.S. Mint collection of David W. Dreyfuss was sold by Bowers and Merena in combination with Presidential Art and Antique Co. (headed by medal pioneer H. Joseph Levine), and introduced Michael J. Hodder to medal cataloging. Johnson & Jensen of Danbury, Connecticut (which featured David T. Alexander as cataloger 1981-1983), was important in its time.

One of the oldest U.S. numismatic auctioneers, Stack’s of New York City, initiated high-quality medal auctions beginning in 1990, including its annual Americana sales. Stack’s recently launched a series of sales offering the vast collection of the late dealer-collector John J. Ford Jr. (1925-2005). In his busy lifetime, Ford built collections in numerous areas—including Betts medals and general U.S. Mint and Indian peace medals—that were the greatest ever assembled by a private collector.

Organizations serving medal collectors appeared only in the second half of the 20th century. The Token and Medal Society (TAMS) was organized in 1960, and its Journal featured many high-quality medal articles, especially in its early years. The Orders and Medals Society of America (OMSA) was formed in 1950 to serve collectors in these specialized areas.

Interested medallic sculptors and collectors, including the present writer, organized the American Medallic Sculpture Association (AMSA) in 1982. That organization soon directed most of its effort into the areas of actual medal sculpting and production. There was still no organization specifically focused on the needs of medal collectors, although an attempt was made in 1972 when the short-lived Collectors of Art Medals blazed across the horizon.

The long-standing need was met in August 1998, when Medal Collectors of America (MCA) was born at the ANA convention at Portland, Oregon. Under the leadership of presidents David T. Alexander and John W. Adams, MCA has achieved solid growth and launched publications that are full of promise for the medal field.

It can be safely said that the future for medal collecting is bright in the 21st century, enriched by organizations and publications, of which the present volume is a significant example.