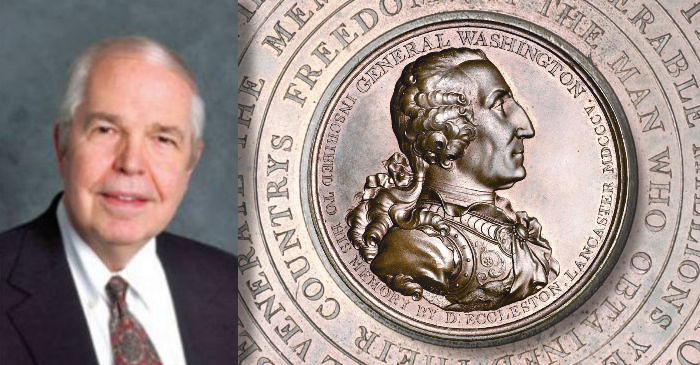 “The Land Was Ours”

Among numismatically popular early medals associated with the life of George Washington, the Eccleston medal of 1805, from dies cut by Thomas Webb, is certainly the largest (76 millimeters), and it is among the most interesting. 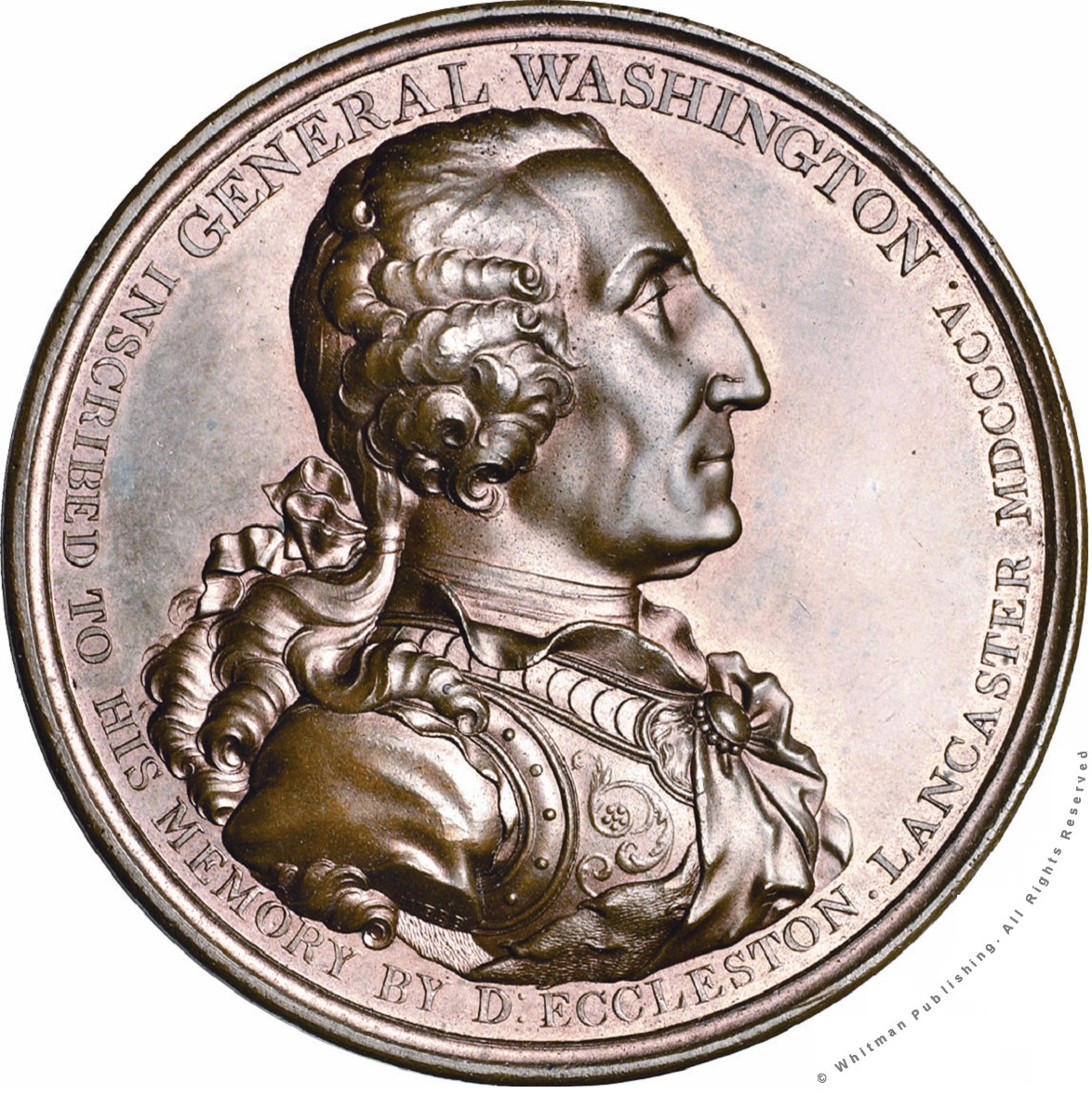 At first glance, this seems to be a satirical medal. Washington is encased in a heavy suit of armor, “a singular conceit” noted W.S. Baker in his 1875 book on Washingtoniana. 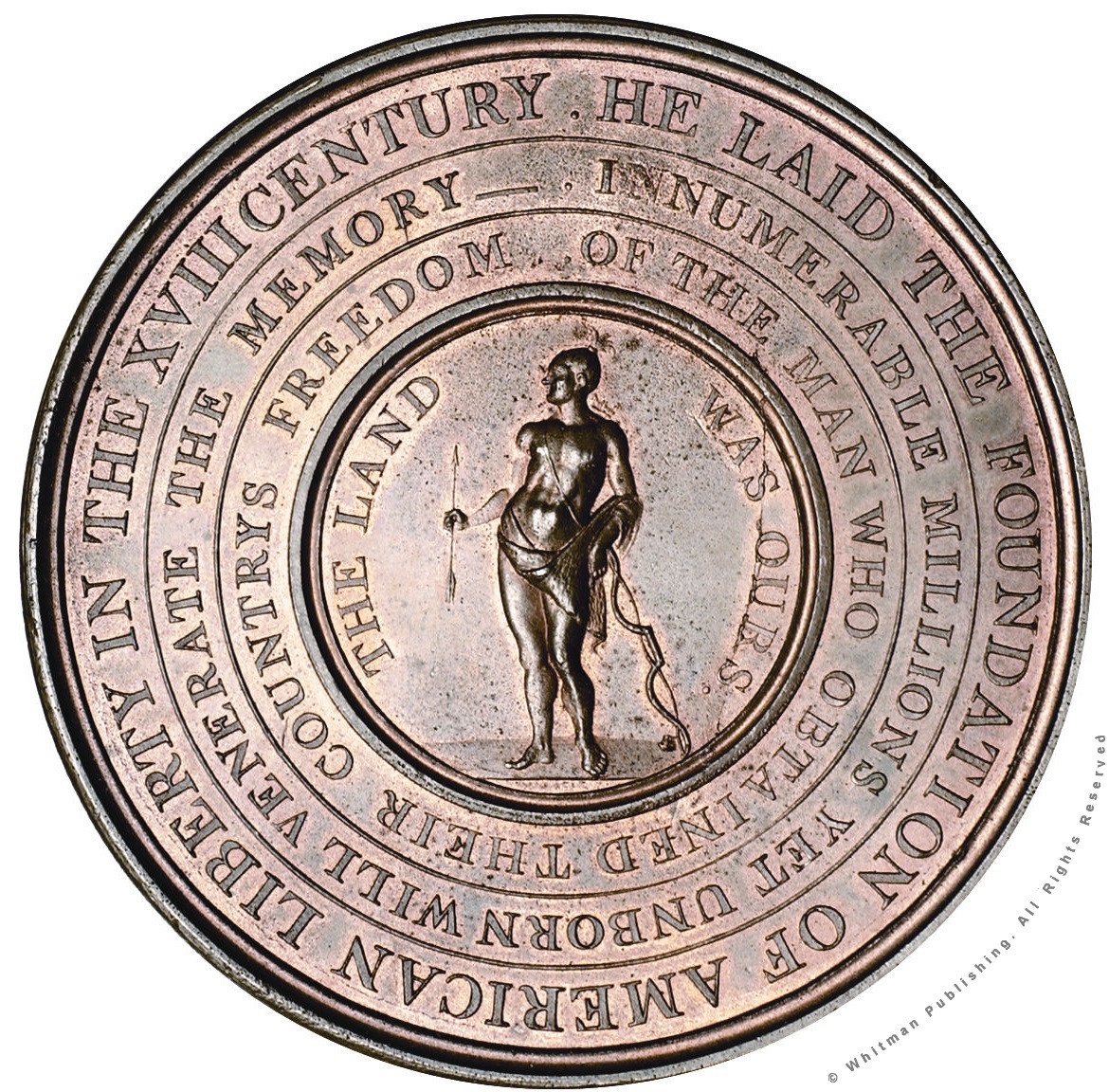 At the center of the reverse is an Indian (Native American) with the surrounding inscription, THE LAND WAS OURS. It seems that Eccleston, a highly eccentric Englishman, meant the medal as a tribute.

According to his own account, Eccleston spent time in America in the late 18th century and was Washington’s guest at Mount Vernon. No confirmation of this has been found by the authors.

I beg your acceptance of a Medallion of your Great Predecessor in the high station which you at present so worthily fill, which I have lately had struck off to his memory, and request the favours of your forwarding a couple to the honourable Bushrod Washington [Washington’s nephew, a Supreme Court justice at the time], for himself, and Judge Marshall.

Notwithstanding the Date on the Medallion, these are some of the first I have issued. I believe it is the largest medal, and in the highest relief that has been struck off in this country for some time.

If it would not be occupying too much of your time, I should be glad just to be informed of the safe arrival of this small parcel and I am,

On December 21, 1816, the weekly Lancaster Gazette published a notice of Eccleston’s death and included information concerning his life and accomplishments.

Daniel Eccleston was born in Fylde, in Lancashire, England, the account noted. After the American Revolution, he spent extensive time in North America. While accounts are somewhat conflicting, his stay in the Caribbean on the islands of Antigua and Barbados is said to have occupied “several years.”

The memorial noted that he had many eccentricities, but was good-hearted. He had engaged in diverse projects and business ventures in Lancaster, including brokering insurance and selling liquor. Among his inventions was a cast-iron loom for weaving sailcloth, a device that was widely used and brought him much profit. He made a coach with oversize wheels for use in fording streams and traveling on beaches at high tide. He was a member of the Society of Friends (Quakers). We also learn that he was a numismatist:

Mr. Eccleston was also a collector of coins and medals. It is to this extraordinary individual we are indebted for the large and handsome medal of General George Washington. He sent, as presents, copies of this medal to the government authorities in America, and one to the Emperor of Russia.

It is not often than someone can read his own obituary. In America, Samuel L. Clemens (Mark Twain) did it, and in England at an earlier time, Eccleston seems to have done so — or perhaps the entire affair was a stunt. In the next issue of the Gazette, he announced he was alive and well, signing himself as Daniel Belteshazzar Fitz William Caractacus Cadwallador Llewellyn Ap-Tudor Plantagenet Eccleston.

Today, the Eccleston medal stands as an elegant specimen of art, one of the most intricate in the Washington series. It also has a colorful history.