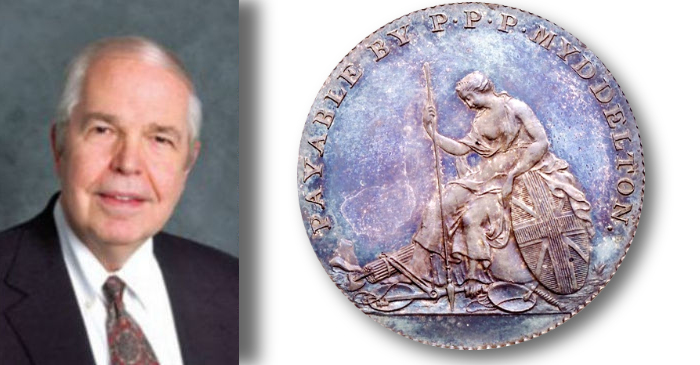 The 1796 British Settlement in Kentucky token, popularly called the Myddelton token, was struck in England but refers to the United States.

A Planned Settlement in Kentucky

In 1796 in England, Philip Parry Price, either surnamed Myddelton or from Myddelton, planned a real estate promotion whereby British citizens were to purchase tracts of land in Kentucky. To further this ambition, he commissioned the Soho Mint, a private enterprise operated by Matthew Boulton and James Watt in Birmingham, to create an appropriate token or medalet. Most likely, these pieces were produced primarily for the numismatic trade, rather than prospective customers for land. Today, several dozen examples exist in silver (primarily) and copper, all with a Proof finish. 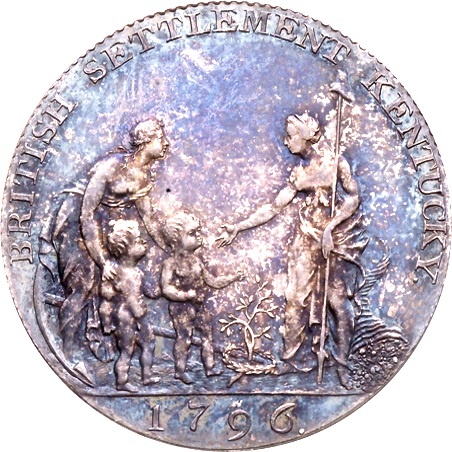 The obverse is inscribed BRITISH SETTLEMENT KENTUCKY and illustrates Hope (representing Britain) presenting two of her children to the goddess Liberty who welcomes them with an outstretched arm, with a cornucopia of plenty behind her, in a representation of the bounty of America. 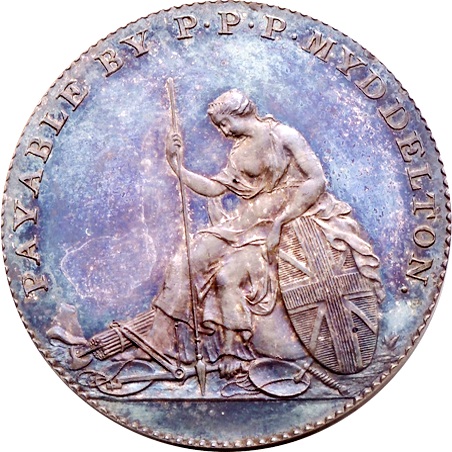 The reverse shows the goddess Britannia, dejected and defeated, possibly an allegory to the loss of her citizens or, reaching back further in history, the British losing the Revolutionary War (the latter the suggestion in Walter Breen’s Complete Encyclopedia of U.S. and Colonial Coins).

From an era in which tokens and medals often carried subtle as well as obvious messages, this particular piece ranks high in numismatic interest today. And, it has been thus for a long time. In his 1875 book, The Early Coins of America, Sylvester S. Crosby paid this piece the ultimate compliment:

In beauty of design and execution, the tokens are unsurpassed by any piece issued for American circulation.

The dies were cut by Konrad Heinrich Küchler (usually given as Conrad H. Küchler) a gifted artist who also prepared the three different Washington Seasons medal motifs about the same time.[1] Striking was accomplished at the Soho Mint, Birmingham, England. 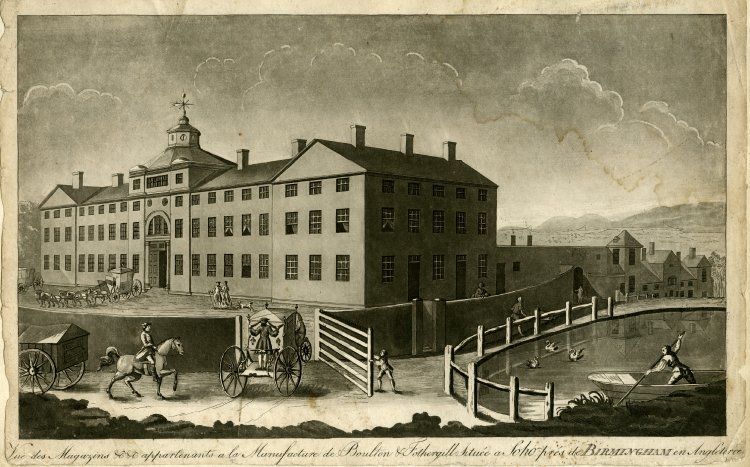 Küchler was born in Flanders. It is likely that he was a die cutter in several German cities circa 1763-1775, his locations including Darmstadt, Mannheim, and Frankfurt-am-Main. He seems to have traveled widely in his work, including to Italy, France, and England. By the early 1790s, he was in the employ of the Soho Mint, where he remained for a long time. While there he made dies for many coins and medals of England, including certain of the illustrious copper issues of 1797-1806. Dies were also cut for coins and medals relating to Russia, Portugal, Ireland, and Denmark.

Begun in 1759, the Soho Manufactory, as it was called, was well known by the time of Küchler’s arrival. The facility was situated on Hockley Brook, a convenient source for power until it dried up. James Watt, maker of steam engines, came to the rescue and set up a steam plant which drove dozens of machines in a three-story structure which, with outbuildings, at one time employed about 600 people.

Although the “Soho Mint” division made circulating coins for the British government and produced issues for others as well, most attention was given to small metal goods, utensils, and notions, including tableware, buttons, candlesticks, buckles, salt cellars, cups, and more.

Matthew Boulton, an inventor par excellence, developed very sophisticated coining equipment that eclipsed anything in use in the United States until decades later. In September 1789, he described his latest coining press:

It will coin much faster, with greater ease, with fewer persons, for less expense, and produce more beautiful pieces than any other machinery ever used for coining. The quantity of power or force requisite for each blow is exactly regulated and ascertained and is always uniformly the same, for the same pieces, thereby the dies are better preserved.

One of my coining machines will work much faster by the attendance of one boy than others can do by any number of men. Can stop these machines at an instant by the power of a child and the same child can as instantaneously set them to work again. Can increase or diminish the force of the blow at pleasure, in any proportion. Can lay the pieces or blanks upon the die quite true and without care of practice and as fast as wanted. Can work day and night without fatigue by two sets of boys.

The machine keeps an account of the number of pieces struck which cannot be altered from the truth by any of the persons employed. The apparatus strikes an inscription upon the edge with the same blow that it strikes the two faces. It strikes the ground of the pieces brighter than any other coining press can do. It strikes the pieces perfectly round, all of equal diameter, and exactly concentric with the edge, which cannot be done by any other machinery now in use.

In 1792 Matthew Boulton described the facility, his Hôtel de Monnaie, as his employee Jean-Pierre Droz and French clients called it. This is from Boulton’s biographer:[2]

The Mint consists of eight large coining-machines, which are sufficiently strong to coin the largest money in current use, or even medals; and each machine is capable of being adjusted in a few minutes, so as to strike any number of pieces of money from 50 to 120 per minute, in proportion to their diameter and degree of relief; and each piece being struck in a steel collar, the whole number is perfectly round and of equal diameter.

Each machine requires the attendance of one boy of only 12 years of age and he has no labor to perform. He can stop the press one instant, and set it going the next.

The whole of the eight presses are capable of coining, at the same time, eight different sizes of money, such as English crowns, [French] 6-livre pieces, 24-sous pieces, 12 sous, or the very smallest money that is used in France.

The number of blows at each press is proportioned to the size of the pieces, say from 50 to 120 blows per minute, and if greater speed is needed, he has smaller machines that will strike 200 per minute…

Mr. Boulton’s new machinery works with less friction, less wear, less noise, than any apparatus ever before invented; for it is capable of striking at the rate of 26,000 [French] écus or English crowns, or 50,000 of half their diameter, in one hour, and of working night and day without fatigue to the boys, provided two sets of them work alternately for 10 hours each.

The Soho Manufactory declined in importance, and in 1850 its contents were sold at auction to Ralph G. Heaton, who continued to produce coins and medals. Among British numismatists, in particular, the Soho Mint is famous today for the many varieties it coined. In the American-related series, the number is far fewer and includes the aforementioned Myddelton token, the three varieties of 1796 Seasons Medals, and several tokens relating to George Washington. Dr. Richard Doty’s 1998 book, The Soho Mint & the Industrialization of Money, tells all you would ever want to know about this fascinating facility.

Fascinating question: Why when the Philadelphia Mint opened in 1792 did it use old-style hand-operated presses when Boulton & Watt, well known to engineers on this side of the Atlantic, might have supplied modern presses? Perhaps they were proprietary at the time, but the firm over the years did supply minting equipment to foreign countries. It was not until decades later, on March 23, 1836, that the first steam press was put into operation at the Philadelphia Mint.

[2] Samuel Smiles, Lives of Boulton and Watt, pp. 396-397. Smiles also related that Boulton and Watt had much difficulty with Jean-Pierre Droz, who in France had devised a segmented collar of six parts by which lettering or other devices could be easily applied to the edge of a coin. However, when Droz was hired by Boulton and Watt, he was found to be “of a very troublesome disposition.” Further, “Several of his contrivances, being found not to answer, were obliged to be better contrived or completely changed by Mr. Boulton and his assistants” (Smiles, p. 390).

Bowers on collecting: Revisiting the two-cent piece of 1864 to 1873