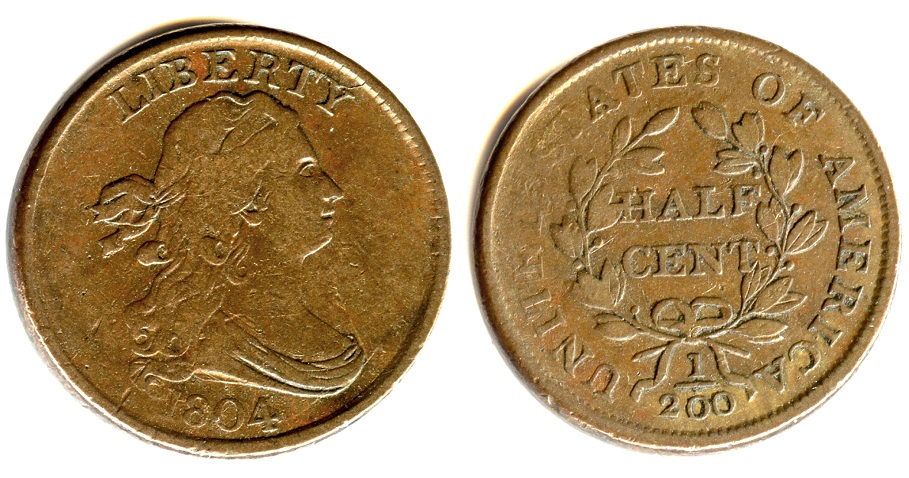 The Draped Bust half cent type was produced from 1800 to 1808. Its obverse, the head of Miss Liberty facing right, was taken from a drawing by Gilbert Stuart with John Eckstein creating a model from it and Chief Engraver Robert Scot making the dies. The Draped Bust motif was first used on certain silver dollars of 1795, then on copper cents and silver half dimes, dimes, quarter dollars, and half dollars of 1796. Miss Liberty’s hair is behind, some strands tied with a ribbon at the back and other tresses falling to her shoulder, and her bust is draped with cloth. The letters LIBERTY are above her head, and the date at the lower border. On the reverse is a wreath open at the top and tied with a ribbon bow below. At the center in two lines is HALF/CENT, and, around the border, is UNITED STATES OF AMERICA. Below the wreath is the fraction 1/200.

The 1804 Draped Bust half cent, with its many varieties, is a fascinating and affordable specialty to collect. The Mint Report gives 1,055,312 as the coinage for this calendar year.mIt is likely that 200,000 or more were from the 1803 dated dies. Still, if 800,000 dated 1804 were struck, this is still the most generous figure of the half cent denomination up to this point in time, a figure later exceeded only by the 1809 half cent. Interestingly, these year-date productions are the converse of the total production of cents of these two years, which were made in relatively low quantities. Further, certain 1804-dated half cents are believed to have been struck in 1805.

Such a large production necessarily called for many half-cent dies to be made. The result created a playground for numismatists of a later era. Within this group are a large group of die varieties with quite a few being rare.

Popular varieties exist of various combinations of the obverse with Plain 4 in the date, with Crosslet (Serif) at the right side of the 4, With Stems in the reverse wreath (normal), and Stemless (an engraving error). In addition, certain 1804 half cents have a so-called “Spiked Chin,” a little thorn protruding from Miss Liberty’s chin, and a series of fingerprint-like lines in the right field. These are marks from a piece of a screw that fell into the press after the die had been used to strike “perfect” coins. It became trapped between a planchet and the obverse die, leaving telltale marks on the die. Mint errors such as double strikes are rare for earlier varieties of 1804, but become fairly plentiful among latter ones, extending to 1805, Medium 5, Stemless Wreath.

Adding to collecting possibilities in the field of 1804 half cents, many coins show varying degrees of die cracks, and some “cud” breaks from a piece falling the die rim. As if this were not enough, some coins were struck with dies aligned other than the normal 180 degrees apart.

As a general rule, half cents of 1804 are usually round on attractive planchets, with nice surfaces, often medium to dark brown, sometimes lighter. AU coins are seen with frequency, although Mint State pieces are scarce. There were no hoards found of this date, as were found of 1800 and 1806.

The Guide Book gives a nice overview of this series of half cents.