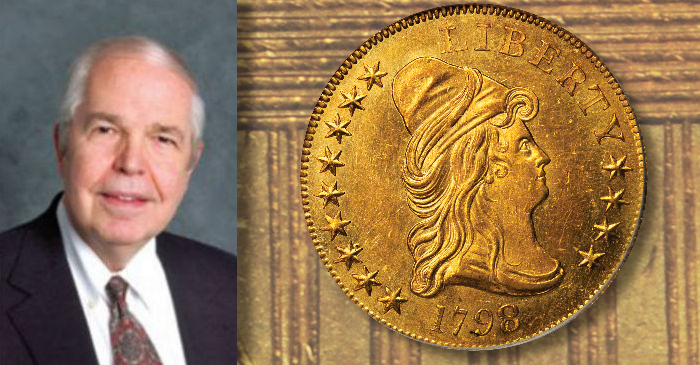 Beginning with coins dated 1797, the Heraldic Eagle reverse was mated to the obverse style used earlier. In keeping with the new reverse style used on the silver and other gold coins denominations of the era, the reverse depicts an eagle with a shield on its breast, holding in its talons a bundle of arrows and an olive branch, and in its beak, a ribbon inscribed E PLURIBUS UNUM. A galaxy of stars and an arc of clouds is above. The inscription UNITED STATE OF AMERICA is along the border. There is no mark of denomination or value. The obverse remained the same as the preceding, except that the star configuration varies on certain issues.

No eagles were struck after 1804, as it was felt that, because of rising bullion prices, the pieces would be melted or exported as soon as they were produced. The 1804 with plain 4 in date and “beaded” is a restrike made in the mid-1830s for inclusion in presentation specimen sets, including those given by Edmund Roberts to the Sultan of Muscat in 1835 and the King of Siam in 1836.

It is generally thought that about 120,000 coins were struck of the 1797 to 1804 type with Heraldic Eagle reverse, but the exact figure will never be known due to the Mint’s practice of using earlier-dated dies in later times. Mintage figures concerning dated coins are estimates.

If you are forming a type set, you will find that issues of 1799, 1800, 1801, or 1803 will be the most likely candidates with the 1799 being the most available. Two examples of the 1803 are pictured in the Guide Book, one with large reverse stars, and one with small reverse stars. Specimens are typically found in Very Fine to AU condition. Uncirculated pieces are rare, and such coins have frosty surfaces. Eagles of 1804 usually have problems ranging from strike to surface damage. They are nearly always irregular in appearance due to buckled or imperfect dies. Beyond that, it is the rarest date of the early 1800s. However, quite a few of the 1804 pieces have crossed the auction block in the last century. 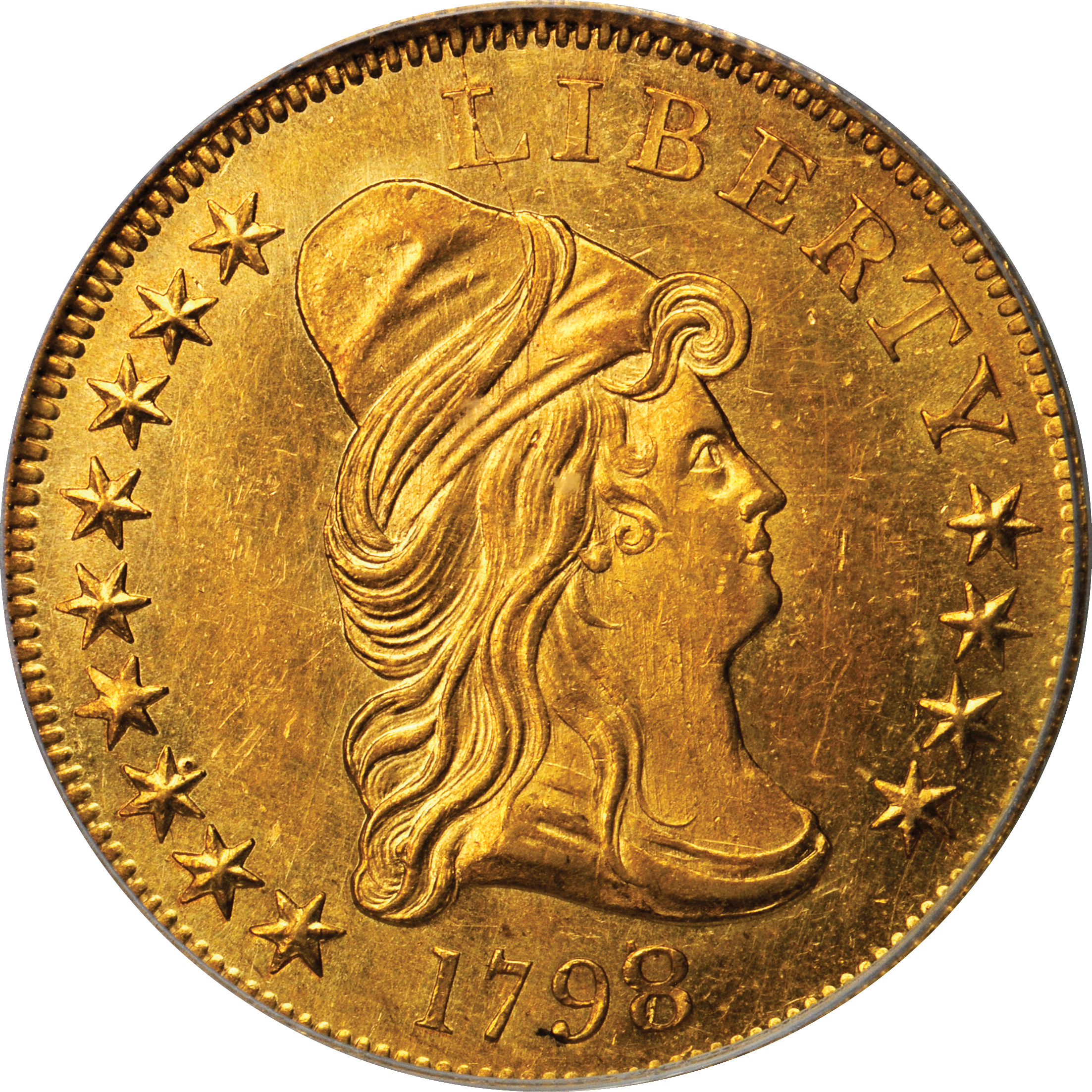 The most famous varieties are the two of 1798, 8 over 7, variously described from rare to incredibly rare — and, by any evaluation, very hard to find — but enough exist that the patient (and well-financed) specialist will have no trouble acquiring one. The well-known rarities within this type are with stars 9×4 and with stars 7×6, the latter being especially difficult to locate. 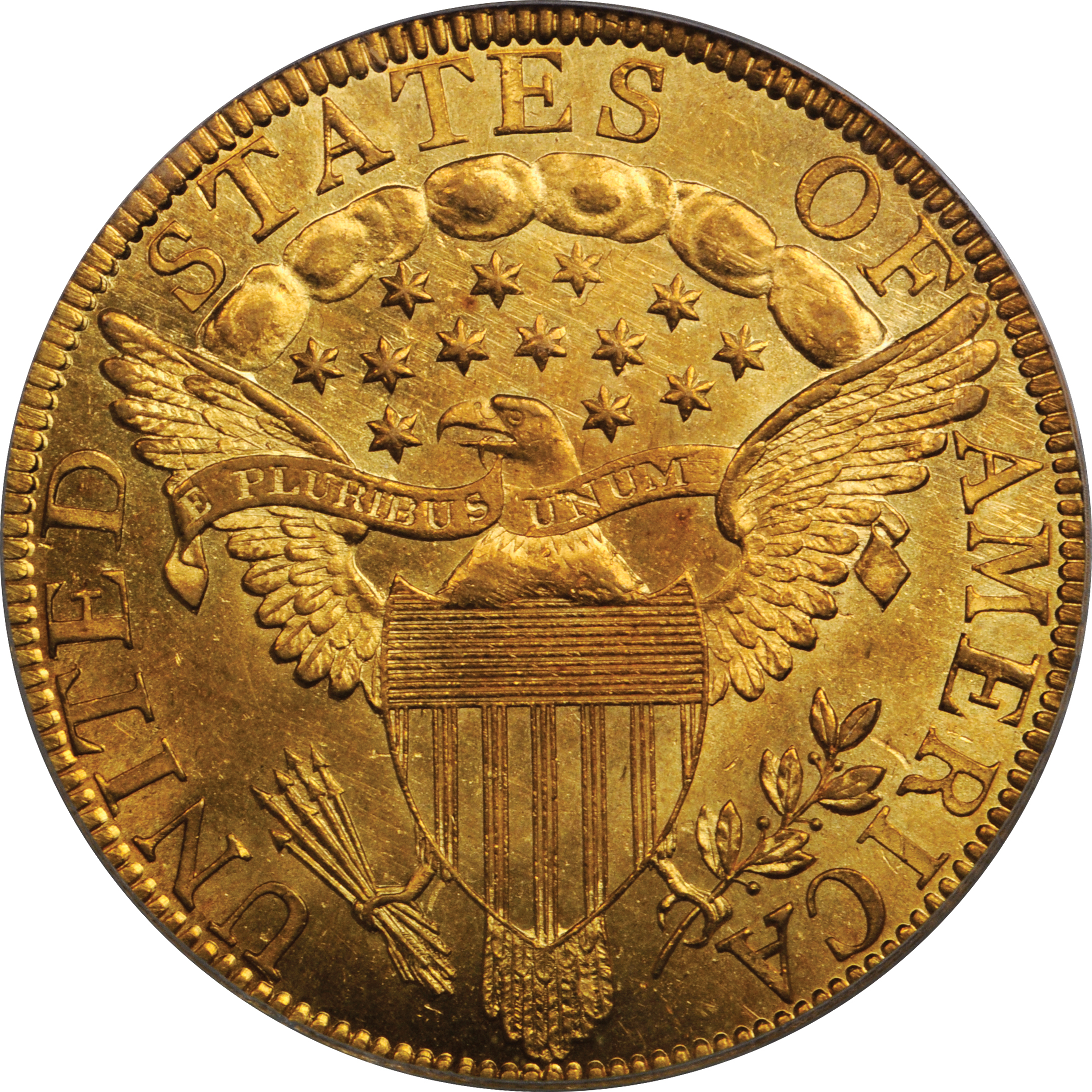 There are many early $10 coins that have traces of use as jewelry in the form of irregular reeding (usually at the top of the obverse), burnishing, polishing, etc. It is likely that at least 10 percent of survivors fit this category. Such coins are not likely to be certified by the leading services unless such traces are not noticed (which is sometimes the case).

Die varieties of the 1797 to 1804 $10 gold pieces form a collecting challenge for the specialist. The beauty of acquiring varieties is that, within a given year, there is little market premium for a rare die combination.