The Royal Australian Mint have issued (29th March) their commemorative coin celebrating the engagement of Britain’s Prince William to his long time girlfriend, Miss Catherine Middleton. This is Australia’s first ever coin to mark the engagement of a member of the Royal family. 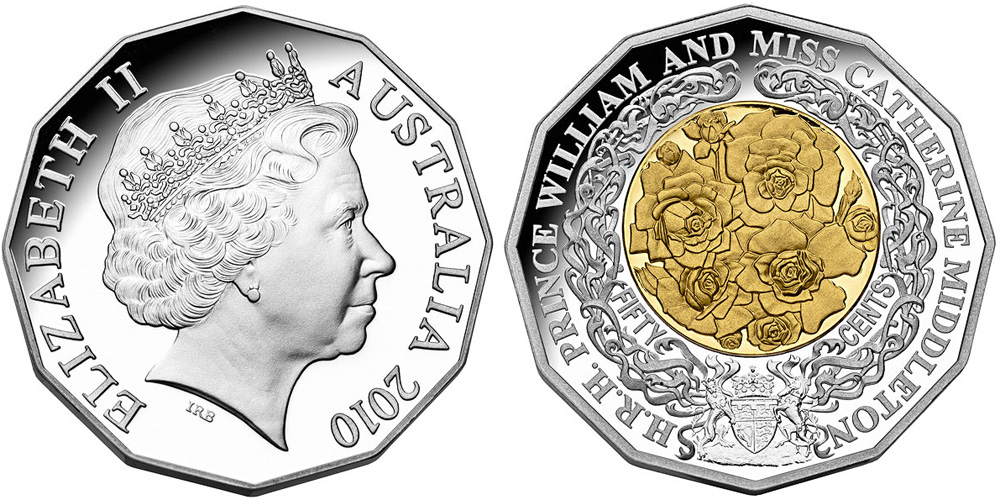 The commemorative is denominated at 50 cents, which is Australia’s distinctive 12 sided coin that has been in circulation since 1969 and has been used previously for many commemorative issues. The reverse deisgn, by Royal warrant Engraver Stuart Devlin depicts a bouquet of flowers within a circle surrounded by filigree and the text “HRH PRINCE WILLIAM AND MISS CATHERINE MIDDLETON”. The coat of arms of Prince William appears below the central design.

The obverse of the coin includes the current circulation portrait of HM Queen Elizabeth II by Ian Rank-Broadley along with “2010”, the year of the couple’s engagement.

A cupro-nickel and silver version are available with a diameter of 31.5 mm and struck in proof quality. The .999 fine silver coin, pictured above, is selectively gold plated and limited to a mintage of 10,000.

The Royal Australian Mint have announced that a coin celebrating the Royal Wedding featuring a portrait of the couple will be released in the coming weeks leading up to the wedding.

For more information on this and other coins offered during this year, please visit the Royal Australian Mint at : http://mintissue.ramint.gov.au/mintissue/eshop_browse.asp