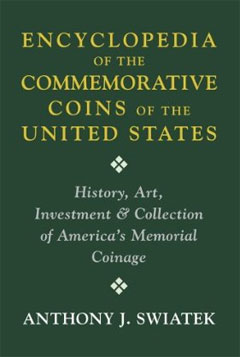 The Encyclopedia of the Commemorative Coins of the United States is written by Anthony J. Swiatek and published in 2012 by KWS Publishers. While many books on commemorative coinage have been released over the years, this volume provides what is perhaps the most comprehensive account available on both the classic series issued between 1892 and 1954 as well as the modern series issued from 1982 to present.

The book then continues with individual listings in chronological format for each of the 59 classic commemorative designs as well as the modern commemoratives and the 50 State Quarter Program. Each listing is set up in a similar manner: Basic information is provided including the date authorized, sales price and number released. This is followed by a description of both the obverse and reveres design, origins of the commemorative, and a description of scarcity today. If counterfeits or varieties are known, those are discussed, along with what to look for when detecting wear on both obverse and reverse. Related materials are also discussed, with information about advertising and distribution materials from the time of issuance. Finally, there is a segment called “future potential”, which includes population figures for both PCGS and NGC. Proofs may also be discussed if they exist for that particular issue.

Swiatek’s Encyclopedia does an excellent job of combining this vast array of information into an listing which is detailed yet very readable. The full color pictures are clear and often of among the finest examples known. The information on rarity appears to be carefully compiled and also provide some tips as to what grade to buy of a certain issue to have the best potential for investment purposes. The book itself is of very high quality, printed in a relatively small format which makes it very portable and easy to take along, if you were so inclined. 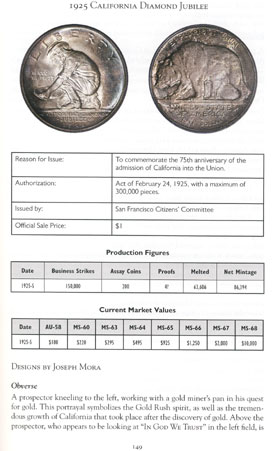 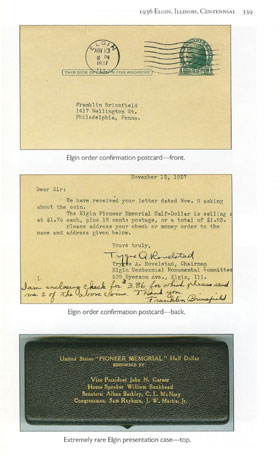 Even though the detailed information about the coins is valuable and a large part of the 712 page book, I believe the most important part is the information and photos within the “related material” sections. This material, which includes advertising, packaging and other promotional items, is surprisingly rare and not often encountered. Swiatek does an excellent job of listing all such items that are known to exist, with many high-quality pictures included. Price indications as well as rarity estimates are given for many such items, information that is difficult to find elsewhere in such great detail. For the advanced collector of commemorative coinage, such material might provide another challenge, as often it was discarded and very few such items have survived the test of time. Most collectors will be familiar with the purple frames issued for the coinage of the 1915 Panama-Pacific Exposition; this book proves that there is much, much more of such material that is worth looking into.

As mentioned, the book also provides an extensive look at modern commemoratives, followed by descriptions and information on each of the 50 State Quarters. For the modern commemorative coins, a format similar to that used for the classic issues is followed, with details on the authorization, original pricing, mintages, designs, origins of the program, and comments on future potential. The modern commemoratives from 1982 to 2009 are covered in detail, with brief information on the 2010 and 2011 issues which had just finished distribution or were yet to be issued at the time of the printing of the book.

Overall, Swiatek’s Encyclopedia of the Commemorative Coins of the United States is a valuable addition to any numismatic library. The only drawback might be the price of $150, which even for numismatic literature is quite heavy. I believe, however, that the book surely is worth its cost and should prove to be much more valuable to the collector thanks to all the information and advice it contains. I wholeheartedly recommend this book to anyone with even a modest interest in America’s commemorative coinage.

This book is available for sale online from sites including Amazon.com and IPGBook.com.