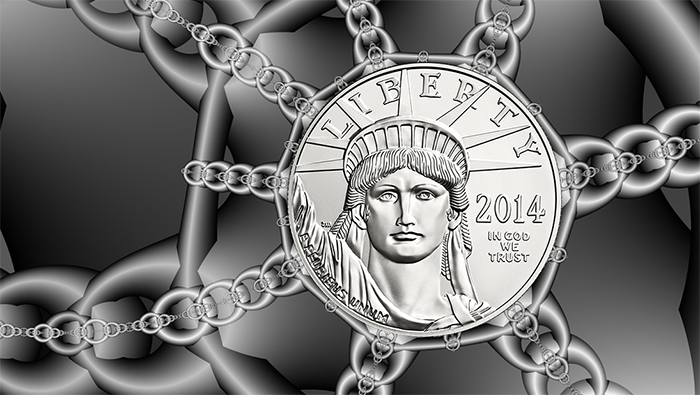 This morning there was a post on LinkedIn that caught my eye. It was a piece from the Telegraph that talked about how the Royal Mint is going to begin offering gold trading using blockchain technology.

If you’re asking yourself what “blockchain” means, I’m sure you’re not alone. I knew the term was somehow related to cryptocurrency, but that was all. I spent a couple of hours reading and bouncing ideas off my three-year-old, always a good sounding board, and decided to write a little bit about it.

This is the technology that Bitcoin is based on. Don’t let words like cryptocurrency, blockchain, or Bitcoin intimidate you. Blockchain technology is nothing more than a digital ledger (yep, just like in accounting class), albeit a highly sophisticated one.

The idea of blockchain is to securely and accurately record financial transactions.

Here is how it works:

* Hashed means the information is turned into a unique code that can only be translated with the proper key. For our purposes, it means the same thing as encrypted.

The clever part about blockchains is that each time a transaction is hashed for a specific person’s wallet, that hash contains not just the single transaction, but all transactions the person has made. All of these past transactions, summarized when each new transaction is completed, generate completely unique hashes.

Example (Wallet Balance is $10 at start):

See how the second hash does not have the any of the same letters in the same position as the first, yet if you had the proper key, “vbndhsl” would be decoded as $10+$5-$4=$11.

Because each hash is unique, there is no way to fake the history of a digital wallet. Fraudsters can’t modify their wallets with computer code to reflect a higher balance at any point in time. This makes blockchains very secure.

How This Will Work in Reference to Gold Trading

The article said the Royal Mint is going to begin its program with $1 billion in gold, using blockchain so that investors can own gold digitally. The gold is there, it’s real, but you can’t take it. You are only buying rights to the gold, which you can later sell, hopefully after the value of gold has gone up.


Say you purchased $2,000 in gold on the RM’s new trading platform at $1,250 per ounce; you now have 1.6 ounces of digital gold. (Does this remind you of anything or sound vaguely familiar? Let’s put a pin in that question and press on for a minute.) You’ve purchased some gold, and I’m assuming there will be an online account where you can check the value of your investment. Each of your transactions will be recorded on a blockchain, so they will be secure and unalterable. It is a very smart use of technology in a pursuit that is centuries old.

The Problem with Bitcoin

Bitcoin runs on blockchain. People can purchase Bitcoins or earn them by “mining” for them. Basically, someone with a powerful computer and a great Internet connection uses it as a storehouse for all of the Bitcoin transactions. (Remember where I explained that blockchain hashes were stored in multiple locations? This computer would be one of those locations.) As the computer accumulates transactions, the person operating it is rewarded with Bitcoins. The more transactions your computer can process, the more Bitcoins you get. Of course, from what I’ve read, the Bitcoin payouts are minuscule per transaction.

People like Bitcoin because it is secure, accurate, and decentralized (meaning the currency is not controlled by any one entity, governmental or otherwise). That’s where its value comes from. Literally! A Bitcoin has value only because enough people agree that it does. I suppose the same could be said for all currencies. The U.S. dollar has value only because it is backed by the full faith and credit of the United States. I think that’s a little sturdier than Bitcoin’s “It has value because we just decided it does,” but not a whole lot.

In reality, money or currency is just a conduit for value. When you buy a gallon of milk, you are paying for:

That is what you’re really paying for—a tiny fraction (because there are many gallons of milk in the world) of all of the things listed above, and plenty more I hadn’t thought to include.

Value, at its core, is about time. The time people spend working. Currency/money is the simplest way to make that time/value transferable to someone else. I mean, the blacksmith could pay the dairy farmer in horseshoes and iron daggers, but how many of those does the dairy farmer really need? Isn’t it simpler for the blacksmith to collect currency or money from customers and then use some of it to buy a gallon of milk?

That being said, money is the safer of the two. While both represent time spent working, currency is backed by hopes and dreams while money is backed by something real and tangible. That’s a valuable insurance policy for everyone.

Remember that question we put a pin in a while ago? Let’s answer it. A digital gold exchange with the most efficient trading system yet invented sounds like the Royal Mint is knocking on the door of bringing back money. They are scratching the surface of a financial instrument that could reasonably supplant broken currency systems.

Consider: the Royal Mint creates a digital currency called RMG (Royal Mint Gold). Anyone who signs up for an account can purchase, collect, and spend RMG as they see fit. Business owners would be foolish to not accept payments that are backed by a tangible asset.

However, what will happen when the first $1 billion in gold is bought up? There is a finite amount of gold on Earth, and I suspect it is nowhere near enough to cover the amount of currency in circulation around the world. But that’s another problem for another time.

The Royal Mint has taken a big step forward. It is great to see. I certainly hope it catches on.   ❑