Bills were recently introduced in both the Senate and House of Representatives which would require the minting and issuance gold, silver, and half dollar commemorative coins to mark the centennial of the Panama Pacific Exposition and the Panama Canal. The gold coins and clad half dollars would feature designs which are close likenesses of the classic commemorative coins issued for the exposition in 1915. 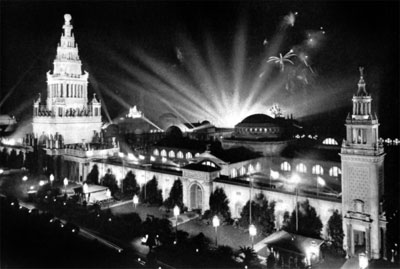 The Panama Pacific International Exposition was a world’s fair held from February 20 until December 4, 1915 in San Francisco, California. It was held to mark the completion of the Panama Canal and the 400th Anniversary of the discovery of the Pacific Ocean by the Vasco Nunez de Balboa. It was also viewed as an opportunity to showcase the city’s recovery from the 1906 earthquake.

Five different commemorative coins were authorized by Congress for the exposition. This included a silver half dollar, gold dollar, $2.50 gold piece, and $50 gold pieces in round and octagonal versions. These coins, particularly the low mintage $50 gold pieces, are held in high regard by collectors. 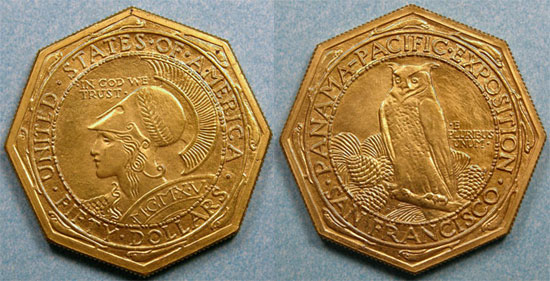 The Senate bill S. 2517 ‘Panama-Pacific International Exposition and Panama Canal Commemorative Coins Act’ was introduced by Sen. Dianne Feinstein of California on August 2, 2012. The House bill H.R. 6331 was introduced on the same day by Rep. Michael Honda of California. Both bills have been referred to committee.

The designs for the gold coins would be a close likeness of the designs created by Robert Aitken for the octagonal and round 1915 Panama Pacific Exposition $50 gold pieces. These coins featured the head of the goddess Minerva on the obverse and an owl perched on a pine bough on the reverse.

The design for the silver dollar would be a close likeness of the Roosevelt Medal which was awarded to each United States citizen who worked for a continuous 2 year period on the construction of the Panama Canal. This medal was designed by F.D. Millet and features a portrait of Theodore Roosevelt on the obverse and the Culebra Cut, a 9-mile, 272-foot-deep excavation through the Cordillera Mountains, on the reverse. 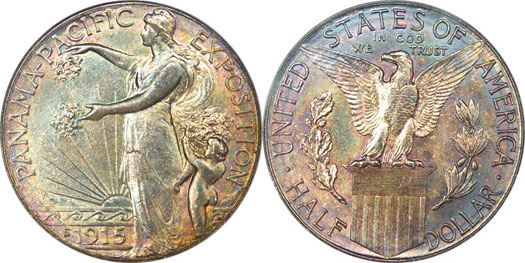 The design for the clad composition half dollars would be a close likeness to the design of the 1915 Panama Pacific Exposition Half Dollar. The obverse design by Charles Barber featured Columbia scattering flowers from a cornucopia held by a cherub with the sunset on the Golden Gate. The reverse design by Charles Morgan depicts an eagle on a Union Shield with an oak branch to its right and olive branch to its left.

The four coins minted under the act would be issued in both proof and uncirculated versions. The coins may be issued only during the one year period beginning on January 1, 2015. Surcharges of $35 per gold coin, $10 per silver dollar, and $5 per half dollar would be added to the purchase price. These surcharges would be distributed 75% to the San Francisco Museum and Historical Society for the design and construction of appropriate exhibitions and 25% to the National Park Foundation for programs, construction, or preservation work at President Theodore Roosevelt’s home in Oyster Bay, New York.

In order to become law and make this commemorative coin program a reality, one of the introduced bills must be approved in both the House of Representatives and Senate, and then signed into law by the President.