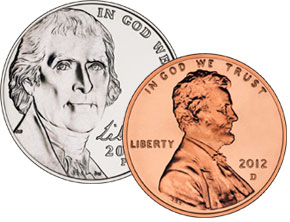 On April 25, 2013, Rep. Steve Stivers of Ohio introduced a bill in the House of Representatives which seeks to immediately alter the metallic composition of the one-cent, five cent, ten-cent, and twenty-five cent coins. The legislation would require all four coins to be minted in American steel, with the cent coated in copper to preserve the current appearance.

The bill H.R. 1719 has two cosponsors, Rep. Tim Ryan and Patrick Tiberi, both from Ohio, and has been referred to the House Financial Services Committee. Ohio is ranked among the top three states for steel production and processing.

The cent currently has a composition of 97.5% zinc and 2.5% copper and cost the United States Mint 2.0 cents to produce and distribute during the most recent fiscal year. The smallest denomination accounted for 64.2% of all circulating coin shipments in FY2012, with more than 5.8 billion units shipped to Federal Reserve Banks.

The five-cent coin or “nickel” currently has a composition of 75% copper and 25% nickel and cost the US Mint 10.09 cents to produce and distribute in the latest fiscal year.

The dime and quarter both have a composition of 91.67% copper and 8.33% nickel and each cost less than their respective face values to produce.

Although the text of the bill is not yet available, a press release from Rep. Stivers notes that the majority of the copper, nickel, and zinc used to produce the cent, nickel, dime, and quarter is imported from Canada. The bill would specifically require the coins be made of American steel going forward. The appearance of the coins would not change, just the materials used to make them. The press release states that according the the House Financial Services Committee, the United States would save up to $433 million over 10 years by changing the composition of the coins to steel.

In 2011, Rep. Stivers had introduced two separate bills seeking to change the composition of the cent and nickel to steel. Subcommittee hearings were held, but neither bill was voted on.

Under the Coin Modernization, Oversight, and Continuity Act of 2010, the United States Mint has been conducting ongoing research and development activities on alternative metallic compositions for circulating coinage. After the first two years of study, the Mint released its first required report to Congress, which had indicated that additional work was required before any recommendations could be made.