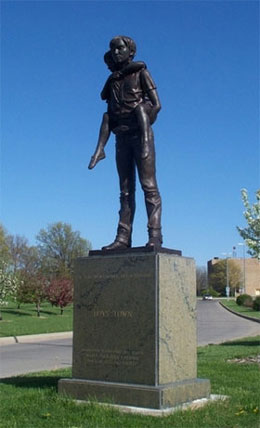 On May 22, 2013, Sen. Mike Johanns of Nebraska introduced a bill in the Senate which seeks to require the Secretary of the Treasury to mint and issue commemorative coins to celebrate the centennial of Boys Town.

Boys Town is a non-profit organization dedicated to saving children and healing families. The original Boys Town was founded on December 12, 1917 by Father Edward Joseph Flanagan and has grown to provided care to children and families in 11 regions. The national headquarters is located in the village of Boys Town, Nebraska.

In a press release Sen. Johanns said, “Boys Town is an extraordinary organization that deserves to be recognized in an extraordinary way. Millions of children have Boys Town to thank for a second chance and a new outlook on life, not only in Nebraska but across the country. The commemorative coin is but one small way to honor the incredible selflessness of all those who had a hand in its success, from Boys Town founder Father Flanagan to current director Father Steven Boes.”

Designs for the coins would be emblematic of 100 years of Boys Town and selected by the Secretary after consultation with the National Executive Director of Boys Town, the Commission of Fine Arts, and review by the Citizens Coinage Advisory Committee.

All coins would be available in proof and uncirculated qualities may only be issued during the period beginning January 1, 2017 and ending December 31, 2018.

Interestingly, the bill does not contain a provision for any surcharges to be added to the prices charged for each coin. Commemorative coin bills typically specify for surcharges to be collected from the sale of the coins and distributed to one or more specified beneficiary organizations.

In order for the bill S. 1011 to become law, it must be passed by the Congress and signed by the President. The bill currently has one co-sponsor and has been referred to the Committee on Banking, Housing, and Urban Affairs.